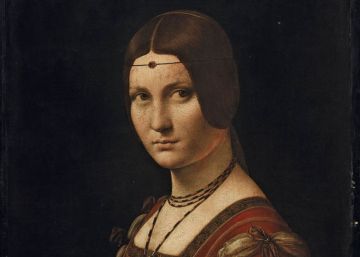 After ten years of preparations, the Louvre will open next Thursday the largest exhibition dedicated to painting and drawing Leonardo da Vinci that has taken place to date. The exhibition, organized on the occasion of the 500th anniversary of the death of the Renaissance genius, will concentrate 10 of his paintings – or rather 11, if added The Gioconda, which will remain in the newly renovated Hall of States – in addition to 88 drawings and about twenty manuscripts, added to a handful of canvases by his contemporaries. Even so, the absences gave more than talk that this amazing sum of booties in the previous visit to the media organized yesterday by the museum.

In the rooms of the sample, practically finished a few days after the opening, there was not even the Vitruvian Man, still held in Italy despite the fact that justice has authorized his loan, nor the Salvator Mundi, sold for a record 450 million dollars (380 million euros) to Saudi prince Bader al Saud in 2017. Those responsible for the show say that the mythical anatomical study will arrive in Paris "in the coming days." The possibility of seeing the coveted portrait arrive seems, however, less likely. "We have maintained the loan request and there are still a few days left for the inauguration," said yesterday, with optimism somewhat imposed, the curator of the show, Vincent Delieuvin, curator of Italian painting of the Louvre. “If it ends up arriving we will be happy. But, if not, the meeting of these 162 works is already impressive enough, ”he added about a sample that can be visited in the Louvre until February 24 (only with tickets reserved online, to avoid foreseeable agglomerations). The attribution of the picture has raised doubts among some specialists. The Parisian museum assures that it will sit chair on its authorship when it has been able to inspect the canvas. "If the work comes to the Louvre, the curators will rule on the issue," said the museum's conservative head of painting, Sébastien Allard, standing next to the Madona Benois, an exceptional loan from the Hermitage.

The exhibition does concentrate another version of the Salvator Mundi, owned by a private collection and attributed to the artist's workshop. In addition to the five lionesses that owns the Louvre in its collection, as La Belle Ferronnière or Saint John Baptist, the sample has achieved loans such as The musician (from the Pinacoteca Ambrosiana), The disheveled (from the National Gallery of Parma) or the so-called Burlington Cardboard, courtesy of the National Gallery of London. On the other hand, there are no works like Ginevra of Benci, which remains in Washington, or The Ermine Lady, which will remain exposed in Krakow. For conservation reasons, canvases such as The Adoration of the Magi, whose state is delicate.

To those who expected a retrospective with the air of blockbuster Definitively, the Louvre responds with a sober and scholarly sample, which gives a leading place to the creative process of the artist and the drastic evolution of his graphic and pictorial technique. In its corridors hang abundant previous studies and infrared reflectographies, a method that reveals the layers hidden under the painting, which allows to visualize the changes made by the painter during the conception of his works. The first room is already far from expectations. The exhibition does not start with a large captivating format, but with a bronze by Andrea del Verrocchio, a great sculptor of the fifteenth century, in whose Florentine workshop Leonardo studied movement and chiaroscuro. Around it, there are studies on the draping that the apprentice made around 1473.

“When a museum speaks of a known artist, it is assumed that it has the cynical ambition to make money. This exhibition shows that this is false, ”said Allard yesterday, stressing that the museum has made a commitment to“ the seriousness ”of its scientific theses and not the mere spectacle. The main one is that painting is still essential to understand his polyhedral work. “For half a century his work has been presented in a fragmented way. There has been more talk about the architect or the scientist than the painter, because it seemed reductive to present it that way. We want to remember that painting was always your gateway to knowledge. ”

The tour of the exhibition reflects an artist determined to move away from conventions to invent a new way of painting. “He distances himself from the imperative in the perfect way, because he realizes that this will mean the death of the painting, being a still form,” says Delieuvin. Leonardo then undertakes his conquest of the movement on the canvas. The thin layers of oil sfumato they will allow him to "reproduce the vibration of life", in the words of the curator, who remembers that his paintings caused "terror" at a time that he did not know the moving image. "He opened his eyes to his contemporaries about the power of the unfinished work, inaugurating a path that will lead to abstraction in the twentieth century," adds Delieuvin.

Nobody denied yesterday that the preparations have been especially arduous. Allard did not hesitate to describe it as the “most difficult” exhibition in the history of the museum. “The works are scarce and fragile. It is a very expensive project that was expected with expectation, but also suspicion. ” Have you ever considered letting it run? "No, because the Louvre never gives up," the chief conservative ditch. To these difficulties were added the controversy generated by the reluctance of the Italian Government to send their works to Paris, followed by the judicial appeal of a Venetian association that tried to curb these loans. "I'm sorry for the controversy, but Italy has ended up being our main partner in the project," Allard recalls. “We had difficulties. But, deep down, they are the same as Europe itself lives ”.

Two decades of inventions: from war to mass consumption

‘The sixth trap’, JD Baker: Read exclusively the first two chapters of the finale of the ‘The fourth monkey’ trilogy | Elementary Blog