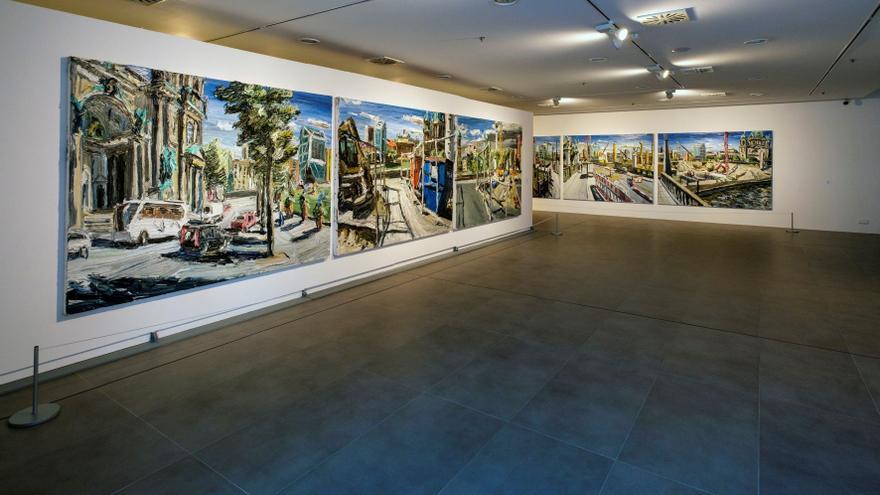 The realistic art with “an expressionist root” by the German painter Christopher Lehmpfuhl is exhibited for the first time in Spain at the Würth La Rioja Museum, where, until January 30, 2022, 59 large-format works hang on its walls, painted with the hands of this artist in the spaces represented.

The exhibition, titled ‘Pathos. Christopher Lehmpfuhl in the Würth ‘Collection, part of the fact that the businessman Reinhold Würth is one of the main collectors of this painter’s work, the cultural coordinator of this Riojan museum, Carmen Palacios, has told Efe. This traveling exhibition has already been hung in the Würth Museum in Germany, in such a way that the premises of the one in La Rioja are the second to house it.

The almost 60 pieces that make up this sample are not all those included in the Würth collection, whose collection “is what long enough to be able to generate a narrative that explains Lehmpfuhl’s artistic career in the last 25 years ”, he pointed out.

Regarding why the work of this artist has not been exhibited in Spain before, he has indicated that “his own career has linked him to artistic movements that have a lot of presence in Germany and, perhaps, this character of local dissemination has made it more difficult for him to exhibit internationally”. “Fortunately, we are the first to show his work in Spain and that this happens in La Rioja is still fortunate for everyone,” said Palacios, who added that this project involves “the possibility of showing an artist very known in southern Europe and teach an artistic technique that is rooted in art history itself ”.

The artistic references of this painter, born in Berlin in 1972, “should not be sought only in contemporary art”, but it is possible to go back “to impressionism and even to German expressionism”, has stated. This artist, he continued, “not only represents the landscape, but also his own emotion at the moment he is creating that landscape, to such an extent that, from the beginning of his career, he decided to stop using pictorial materials to paint with the hand and mix the colors directly on the surface of the fresh canvas ”.

Those who access the first floor of this exhibition will find that it opens with “one of the most important series that Lehmpfuhl has made in the last ten years and that it is the most extensive of all his artistic ‘corpus'”, dedicated to the deconstruction of “an emblematic space in the center of Berlin, such as the Palace Square”, has pointed out.

He highlighted that this exhibition continues on the ground floor of the museum, in which it has been sought that “the visitors not only had that idea of ​​the urban painter, but of the naturalist painter, who is going to look for the grandeur of the most primal landscapes and authentic possible and that tries to bring the reality of those landscapes ”to his paintings. This artist “is also heir to travel painting, which was very popular, especially at the end of the 19th century ”, as exemplified by the fact that the exhibition brings together painted works, for example, on the Helgoland Islands, in the Alps at minus 20 degrees of temperature; and in Iceland under “very harsh” conditions, he specified.

His way of painting “changes depending on the conditions”, and, as the artist himself explains, Palacios recalled, “paint in summer is very runny and at minus 20 degrees it has a consistency that looks like ice cream“, Then,” the way of developing his pictorial process is different depending on the real conditions that are affecting him and that subordinate the result of the painting “.

It has specified that, in addition to the large paintings, this exhibition has the projection of three short documentaries about its creation process: one about the Palace Square series and two more about a project in Iceland and another in the Helgoland Islands. “It seemed to us that it was important to give value to the artistic creation process,” he said, and “documentaries contribute precisely that: seeing this artist on a cliff next to a storm gives a good image of the difficulty of the creative process that entails. each of the works that are part of the exhibition ”.

But the audiovisual projections are not the only elements that the visitor will find next to the paintings, since there are also personal objects of Lehmpfuhl used during the production of his works, such as a jacket full of paint and a bag of paint tubes. “He is an artist – he stressed – who does not paint with a brush, he paints with his body, and his whole body and what he wears, in some way, is part of the works of art”, so “we talked to him and he made us a small catalog of a series of objects that he had in the studio affected by his way of painting ”.