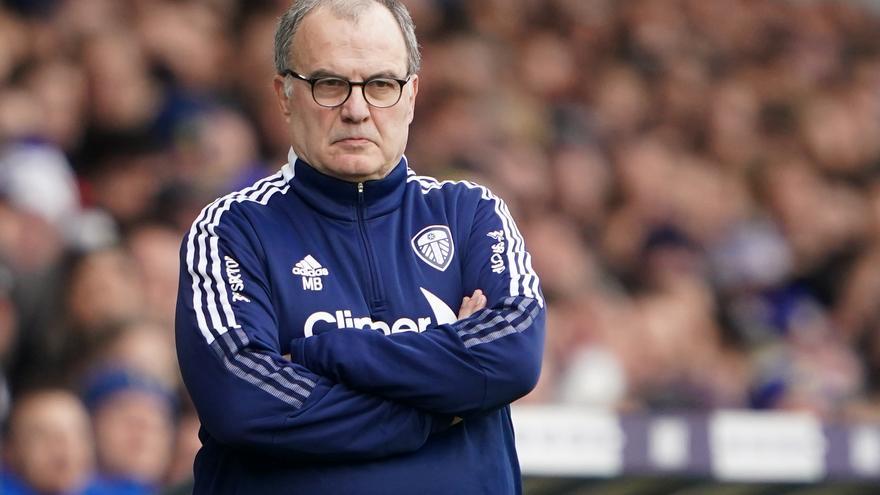 The Leeds United announced this Sunday impeachment of Marcelo Bielsa. The Argentine coach, in charge since 2018 and who returned the club to the first division in 2020, has not been able to withstand a poor run of results that culminated this Saturday with a painful 0-4 at home against Tottenham. However, his departure does not prevent 'el Loco' from continuing to be a myth in the club and in the city.

Leeds have only added one point in their last six games and he has conceded 21 goals in that period, 17 in the last four. A sharp drop that looks like relegation, which he now sees only two points despite having played two more games than his immediate pursuers, Everton and Burnley.

murals in the city

No coach would put up with numbers like this, but in the case of Bielsa, 66, the decision has been delayed because the Argentine coach is an idol at the club and in the city of Leeds. Despite the results, the stadium fills up every day and the walls of the city have murals with the face of the coach ("a man with new ideas is considered a madman, until his ideas work", reads one) that returned them to the elite 16 years later to suffer for the Championship and even for League One. The fans see Bielsa not only as the best coach in its modern history, but as the savior of a historic clubwhich has in its list of winners leagues, cups and even European finals.

"Has been the hardest decision i have ever had to make since I've been in charge of Leeds United, taking into account all the successes that Marcelo has had with the club", explained its president, Andrea Radizzani, in the notice of his dismissal. It hasn't been easy either. Victor Ortafootball director of the club: "It is disappointing that his stage ends like this, taking into account the special moments we have experienced in recent years, which are some of the best of my career, but we cannot cover our faces against the poor recent results.

Bielsa surprised by enrolling in 2018 at Leeds, which was in the Championship. Or maybe not so much for something he is known as 'el Loco'. In his first season he was close to promotion, which eluded him in promotion, but in the second he ended up as the outstanding leader (10 points over the second) to return Leeds to a Premier from which he had said goodbye in 2004.

Thank you Marcelo for everything you have done for me.

You saw in me what I didn't even see in myself. You helped me grow as a player but most importantly as a person.

Wishing you all the best in your next chapter.

"Bielsa transformed the destiny of the club", Leeds admits in their statement. After promotion, last season he achieved his best score in the Premier in 20 years (9th with 59 points). But in this course, even the injuries of Kalvin Philips and striker Patrick Bamford are difficult to combat, the loss of goals conceded (60 in 26 games) is being a burden that is impossible to overcome.

believe or not believe

In Bielsa's style book there is no option to play in another way. Playing attack is non-negotiable. This week, after losing 6-0 against Liverpool, the Argentine coach has already ruled out the journalistic suggestion of betting on another model: "If I stop believing in what I believe, the situation, instead of getting better, will get worse"he wielded

"The end doesn't matter if you've enjoyed the journey," sing Elland Road fans, where the club plans "a permanent tribute project to Marcelo". Winning or losing is no longer the first criterion for Leeds fans to assess their team's games. As was read in 'The Times' a few days ago: "It's like if you go to the theater and you don't enjoy 'Romeo and Juliet' because it doesn't end well."

A 'red bull' for the relay

Leeds hope to announce the name of Bielsa's replacement on Monday. The English press opts for the experienced Sam Allardyce as a possible coach until the end of the season, but with a view to incorporating Jesse Marsch at the end of the season. The American coach is a product of the Red Bull 'soccer team', so lauded lately. He went through New York Red Bulls, Leipzig (as assistant to Ralf Rangnick), Salzburg and this season he started as a starter at Leipzig, where he was fired in December.