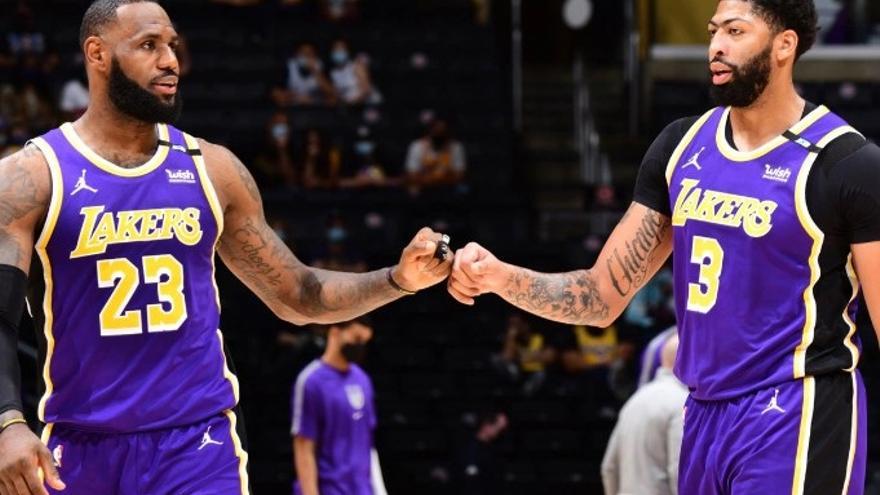 Los Angeles Lakers without Marc Gasol beat Golden State Warriors 103-100 and will play the first round of the playoffs against the Phoenix Sun after coming back from a difference of 13 points thanks to a great performance by LeBron James, who obtained a new triple-double.

The Warriors dominated the Lakers for much of the game at the hands of an intractable Stephen Curry, who scored 37 points and 6 of the 9 triples he tried. But in the last quarter, ehe trio of James, Anthony Davis and Davis Schroder, with the assistance of Alex Caruso, they turned the game around and propelled the Lakers to the playoffs.

Curry would finish as the top scorer of the game, with 37 points, 7 rebounds and 3 assists. After the game, Los Angeles team coach Frank Vogel expressed his admiration for the Warriors point guard who was able to score unlikely baskets despite the intense pressure he was subjected to.

The defeat condemns the Warriors to contest the eighth and last place of the playoffs in the Western Conference to the Memphis Grizzlies, who yesterday defeated the San Antonio Spurs in the other play-in game.

Even if LeBron, with 22 points, 11 rebounds, 10 assists, 2 steals and 1 block was not the top scorer of his team (Anthony Davis had 25 points and 12 rebounds), Akron’s was, once again, the most decisive player for the Lakers.

With one minute remaining in the game, with a 100-100 tie on the scoreboard, the ball reached James as possession ran out for the Lakers. LeBron, with an eye problem after being hit a minute earlier by Draymond Green, only had time to pick up the ball and shoot desperately.

James’ shot came in clean and put the Lakers ahead, 103-100. The Warriors had two more possessions but were unable to score, leaving the score unchanged.

The game had started on the face for the Warriors. A sticky defense, especially Green to Davis, made life miserable for Lakers shooters.

In the first 7 minutes, the Los Angeles team only made 7 points while the Warriors hung 15. Andrew Wiggins and Kent Bazemore worked in attack while Curry, who also suffered a fierce defense, distributed game.

Up front, neither LeBron nor Davis nor Dennis Schroder, the Lakers’ leading scorers, were in tune and the first quarter ended with the Warriors 6 points ahead, 22-28.

The same trend continued in the second quarter: the three main men of the Lakers without contributing in attack while Curry began to warm the wrist.

When the two teams went to the locker room at halftime, the difference in favor of San Francisco had increased to 13 points, 42-55. Curry already had 15, Wiggins 9 and Juan Toscano-Anderson, from the bench, 8.

In the Lakers only Caruso, also off the bench, held the guy, with 12 points. LeBron had very poor numbers: David 5 points and Schroder 2.

Everything changed after the break. The Warriors’ defensive pressure eased, giving Los Angeles shooters a bit more room. At the same time, the Lakers began to tighten the nuts on defense to the Warriors.

At the start, the Lakers enjoyed a 7-0, 49-55 run, which cut the difference in half. With 9 minutes remaining in the third quarter, the Lakers were already just one point away, 56-57. Four minutes later, the Warriors’ reaction managed to put the gap between the two teams again: 60-72.

But the Lakers had already gained confidence. With 1 minute remaining in the third quarter, LeBron scored his first triple. When the fourth ended, the Warriors were only 2 points ahead, 77-79.

The last quarter was a continuous fight. The Lakers managed to take the lead for the first time in the game one minute after the restart, 81-79. LeBron’s team lead was 7 points, 87-80, but Curry and Wiggins were in charge of preventing the Lakers from escaping.

With 2 seconds remaining until the end of the match, Curry was unable to control the last ball which decided the victory in favor of the Lakers.