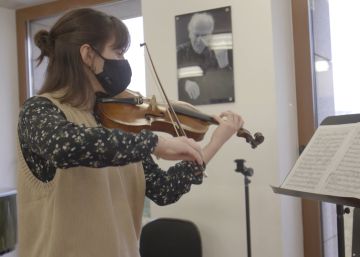 The corridors of the Reina Sofía School of Music, in Madrid, these days are strangely silent. Students and instruments (violin, piano, oboe, cello, trumpet, clarinet …) are barely perceived, presence and movement limited by the invisible threat of the coronavirus, and the few face-to-face classes that are held, in soundproof classrooms, are individual. In one a lesson unfolds on-line violin with Marco Rizzi (tenured teacher), Ricardo Ali (accompanying pianist) and María Ramos (Salamanca student); and only when you open another one can you hear the powerful and warm voice of Mailyn Cruz, a 25-year-old soprano, and some piano chords interpreted by the accompanying teacher Madalit Lamazares: they rehearse the first aria of Queen of the night, from Mozart. “Mailyn arrived from Cuba last year, with the potential and talent she has, but there is still a lot to fix,” he says. Only virtue opens these doors, and the demand is maximum.

Of the 600 applications that arrive each year at its facilities in Madrid’s Plaza de Oriente, only about 30 places are admitted, which will be distributed between the Higher Degree in Music, a Master in Artistic Teaching of Musical Interpretation and a study plan of its own. for those students who, having completed their musical training, want to obtain a higher degree of improvement before starting their professional career. All around two fundamental pillars: excellence and inclusion, because since last year 100% of the students enjoy free tuition, and two out of three also enjoy a residency scholarship: “Nobody is left out for a a question of resources, and this means that the only criterion for entering the school is talent. There is an audition process that begins now in December and continues until April. And only those with enough talent enter, ”says Julia Sánchez, CEO of the Reina Sofía school.

Faced with the pandemic, digital classes

Continuing classes during the pandemic has not been easy for the more than 150 students enrolled. “When we confined ourselves, many had to return to their countries, to Colombia, Russia, Armenia … There, the digital media had a lot to do with it and we managed to connect most of them, so that they could continue studying,” says Sánchez. An effort that turned out to be a technological challenge, since many students “did not have the equipment to compensate for what they have here, and they often had to work with a telephone or in a place with little coverage, so, as much as want, the quality is not the same ”, recalls Lamazares. “Sometimes I had female students who I understood half of what they said, because they had the Wifi in the kitchen, and there was noise from the street ”.

For the 2020-2021 academic year, the school had to adapt thoroughly, and find the platforms that would work best. For the online classes, for example, they have an Italian tool, MF Classrooms, which is designed for music classes and takes into account all the necessary characteristics to make the transmission as smooth as possible, with a very low latency. “More or less, around 40% of the classes we are doing face-to-face, and 60% on-line (usually the most theoretical). Those that are with local teachers are made here, maintaining all security measures. But since we have a large international body of teachers who cannot travel, these classes are held digitally, ”explains Sánchez.

The advancement of technology has been fundamental in guaranteeing the best possible educational conditions, and for this reason Sánchez acknowledges that only five years ago they would not have been able to do what they are doing now. “In fact, now that they are going to launch 5G, in which the latency is much lower, we have done with a technology company the test of a music quartet, which is separated into different rooms and can play together thanks to to 5G, with very high sound quality. The evolution of technology has been so high that even something as fine as classical music can be heard with exceptional quality ”.

In this situation dominated by insecurity, one of the school’s priorities has been to maintain face-to-face activity as much as possible, both in terms of interpretation classes and at the level of concerts and performances. “The face-to-face part is essential because, in addition to interpretation skills, they are developing others such as critical thinking, project management, creativity … And their interaction with each other is maximum,” he adds.

“The professor is teaching from his home, because he cannot come, and we are here. No matter how much energy, the student lacks the presence of the person who is not physically there; no matter how much you want to work; no matter how good the teams are, that contact is lacking, which is so important, even though we are two meters away ”, says Lamazares, who has been a teacher at the school in the singing department since the 2000-2001 academic year. “In the case of vocal repertoire classes, presence is very important, because there is always a small gap between the music and the image.”

Izem Gürer (Turkey, 1999) has been a student at the school for seven years, in the Fundación Banco Santander piano chair. She began to play the piano when she was only eight, and three years ago she received from the hands of Her Majesty Queen Sofía the most outstanding student diploma of her chair. For her, the current crisis situation also has a positive side: “On a personal level, I felt that all the plans I had, concerts and contests, were postponed or canceled. But I have also had time to do more things, such as studying the works that I had always wanted to play, read … So I have continued to develop in a different way ”.

For Marlon Mora (Colombia, 1995), student of the IF International Foundation trumpet chair, the most complicated thing has been the lack of direct contact with the teachers, and the lack of coexistence with his classmates: “Not being able to have our friends and classmates has been the most difficult, because I was used to living with many cultures from other countries, here at school, and learning both the human and artistic side ”. He was one of the students who had problems returning to Madrid this year, due to the closing of borders. Thanks to the management of the school, he was finally able to find a flight with a stopover in Quito (Ecuador).

Since the fundamental objective is to prepare students for their future professional careers, and that they can play in any orchestra, the stage is considered an extension of the classroom. For this reason, the Sony Auditorium of the school has maintained its activity with, of course, a reduced capacity of between 10 and 30% of the people, and with many precautions both at the entrance and throughout the premises: from the taking temperature and facial recognition until the maintenance of the safety distance and the use of hydroalcoholic gel. “If, within their training, we take away the opportunity to give concerts, we eliminate a very important part,” he says. The concerts also are streamed on the school’s YouTube channel.

Music, a tool for social transformation

One of the fundamental aspects for the music sector in this period of crisis has been the fragility of the sector. In countries like Italy, France or Germany, theaters have been closed, and as the artists are freelance, they have difficulties to survive; in others, such as Spain, they continue to try to hold concerts, with all the necessary security measures. “The importance of having an important public sector that supports culture and considers it an essential good has been valued. I believe that the students have been able to see these differences within the educational community, and at the same time reflect on the implications it has and how we can support each other ”, reflects Sánchez. In his opinion, “Governments have seen that it is not just entertainment, but that it has a power that goes beyond. It is an important tool for social transformation, which keeps us sane and united in many cases, and makes many people feel good ”.

The school is aware, however, that the situation could change at any time, so that it would be necessary to return to a situation of total confinement and adapt again to a purely digital environment that would have a more visible effect on their training. since it would prevent the celebration of concerts. “In a normal year, we organize about 380, and each student does, on average, about 20. Concerts that are chamber music, with orchestra, as soloists … This variety of registers, of interpretation, will be very difficult to maintain this year, but we are happy because we are being able to maintain them ”, explains Sánchez. “We are also designing a camerata, which we always do in the Christmas program, with which we always do a tour of six or seven concerts. This year, what we will probably do is do four of them in person, with all the measures, and three digitally, in the same settings where they usually take place (one of them, for example, in the Santander Cathedral), but without an audience ”.