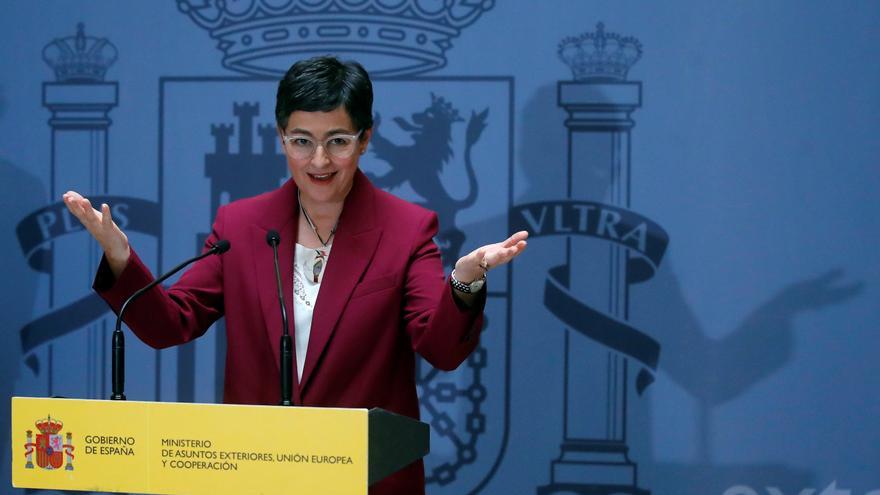 “If we say feminism, we do feminism. And not only from the Ministry of Equality.” It is the last mantra of all the departments of the Pedro Sánchez Government, in a year in which women’s issues have caused not a few confrontations between various ministries in line with the legislative agenda that Irene Montero arrived willing to promote and was part of the agreements signed by the coalition. The Foreign Affairs department, with Arantxa Fernández Laya, has already coined the expression “feminist diplomacy” to talk about her performance at the forefront of foreign policy. And it is not just a slogan, nor a game of language, but the awareness, beyond banners or micro-causes, of the importance of incorporating equality also in international relations. Before it was France (since 2018 on the recommendation of the High Council for Gender Equality), before Canada (2017) and before Sweden (2014). Now, it is Spain’s turn.

The President of the Government, Pedro Sánchez, will present this Wednesday, together with Fernández Laya, the Feminist Foreign Action Plan with the purpose that at the end of the Legislature “there will be a profound change in foreign culture,” defends a convinced head of the Spanish diplomacy. Not surprisingly, women still represent a Pyrrhic 27% of the staff in the Spanish diplomatic career. When Laya arrived at the Department of Foreign Affairs, the presence of Spanish ambassadors in the world was 14% compared to 86% of male ambassadors. A year later, the representation is 21%, seven points more than the minister is determined to increase. At the last call for ambassadors, 95 men and 15 women have presented themselves as candidates. The goal that women ambassadors – the highest level of the diplomatic career – represent 25 percent of the total at the end of this legislature.

The overwhelming disproportion now has to do above all with the absence of measures for conciliation and equal opportunities in the diplomatic career, and also with the lack of mechanisms that facilitate the labor transfer of male spouses to the country of destination. In fact, when the partner of a consul is hired as a consultant in the country of destination of her spouse, the press speaks of nepotism, and does not see in this a measure for conciliation. In 2020 she spent at the Spanish consulate in Houston headed by diplomat Julia Olmo, after being awarded a temporary position as assistant to her husband. Far from seeing in the decision a mechanism in favor of conciliation, some holders spoke of favorable treatment, despite the fact that the procedure was carried out in accordance with the law and administrative requirements.

The Feminist Foreign Policy Strategy involves incorporating “the gender approach into all areas of foreign action” and in fact the Minister of Foreign Affairs is willing to promote a greater presence of women in Spanish foreign action, but also to lead projects in defense of diversity and allocate the bulk of the development cooperation budget to initiatives that have a special impact on women and girls. Not in vain of every 100 men living in extreme poverty in the world as a result of the pandemic, there are 120 women in the same situation.

Spain already led last November at the United Nations a resolution for the response to the pandemic to take into account gender issues and ensure the participation of women and girls in all their diversity, taking into account the increase in sexist violence to the majority participation of women in the first line of the health response. Without forgetting the importance of the economy of care and access to sexual and reproductive health services, whose items have been reduced during the pandemic. And it is in this context that Foreign Affairs has drawn up the action guide that is presented this Wednesday in the presence of President Sánchez and with the telematic participation of the former US Secretary of State Madeleine Albright and the former High Representative for Foreign Policy of the EU Federica Mogherini.

The objective of “feminist diplomacy” that Laya wants to deploy will not be limited, as in France, only to development cooperation but includes foreign trade policy, an area where the representation of women is conspicuous by its absence. all export financing channels and networks. And this happens even though the economy is a vital instrument for equality policies that usually escapes the scope of the line ministries. According to studies carried out in OECD countries and in some non-member countries, an increase in the participation of women in the labor force – or a reduction in the disparity between the participation of women and men in the labor force – produces growth economic faster as well as a notable impact on the GDP of the countries.

The idea of ​​the guide is to put all the instruments available to foreign policy at the service of gender equality and to promote initiatives that promote equality. At least 85 percent of the development cooperation actions carried out by Spain will have as their main objective the empowerment of women and girls and the fight against inequality. But the plan includes five lines of action: women, peace and security; violence against women and girls; human rights of women and girls; participation of women in decision-making spaces; and economic justice and empowerment of women.