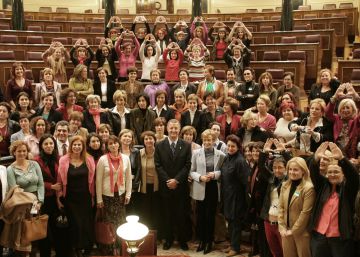 Spain made a brave decision 15 years ago with the Law 1/2004, of December 28, on Integral Protection Measures against Gender Violence, which has turned out to be an example for many other states in the world. Our society endured not only the inequality between men and women, but also the worst face of it, that of violence against women in different degrees and levels until reaching the most terrible, the murders. Years before, the case of Ana Orantes, burned alive by her husband after denouncing on television the violence she suffered for more than 40 years, had shocked Spanish society, opening a door whose threshold has not crossed in the opposite direction.

Gender violence does not belong to the private sphere. Never before has it been so blunt that "the personal is political," as I said Simone de Beauvoir. From feminism we have always defended that there are spaces where democracy has to enter to guarantee the physical, moral integrity and the possibility of fully developing the rights and freedoms of women.

It has been feminism, with its illustrated roots, who has been raising the concepts and achievements with which today we can nurture any discourse of this nature. It has been the Spanish society that has sustained with determination the progress and construction of our democracy in a constant desire for improvement. They have been the women of this country, accompanied by the vast majority of men who are on the sidelines of being violent, apart from being potential criminals, apart from not being able to understand and other relationships that are not based on respect, in Freedom and equality.

The relentless struggle of the feminist movement, the impulse of the Socialist Party and the consensus that placed the framework from which to address this structural and specific violence resulted in a pioneering law that generated a great agreement on the concept of gender violence and that contributed to modify social and political frameworks to face it.

An exemplary law whose strength, underpinned by the unanimity with which it was adopted in the Congress of Deputies on December 22, 2004, was a gesture of democratic maturity and political courage, not only of the party that promoted it, but of all and each one of those who voted that day. We were able to incorporate other ideological positions other than the government that gave birth to it, and that is a fundamental asset for our own democracy.

That consensus was reflected in 2017 in the State Pact against Gender Violence. We have continued to maintain the unity of action and the unanimity of understanding. In addition, we have integrated the obligations contracted in the Istanbul Convention, addressing violence against women also outside the context of the partner or ex-partner. This pact meant something even more profound: the decision not to be partisan in a fight that has to be for everyone, firm and common.

We are aware of the room for improvement and that we must continue working against violence that has claimed the lives of more than 1,000 women since there are official data in 2003 and 34 minors since 2013.

Without equality there is no democracy. And in front of those who want to weaken the consensus that has been drawn for 15 years in this country and that has meant the exemplarity not only of the law, of the institutions and public administrations, of our courts, but also of a society like ours , we firmly affirm that they cannot break the great majorities that we have been able to build. The struggle for equality from the constitutional and democratic perspective must be a priority and a matter of State. That is why it is so important to make this reminder, to look again as a society to know where we come from, because it is the only way to know not only where we are going but especially where we want to go.

Carmen Calvo She is Vice President of the Government and Minister of Equality in functions.