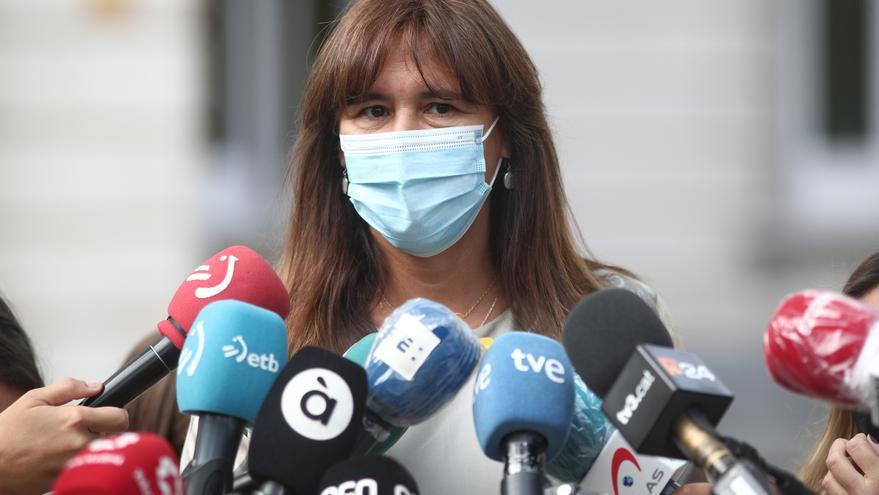 The leader of Junts per Catalunya (Junts) in Congress, Laura Borràs, has prevailed over the Minister of Territory, Damià Calvet, in the party’s primaries to choose her candidate for the presidency of the Generalitat in the elections to the Parliament of the next February 14th. Borràs has swept the primaries with 75% of the votes, for the 20% obtained by Calvet.

After the decision of the former president of the Generalitat Carles Puigdemont de go on the lists of Junts but not be their presidential, the party called primaries to choose the candidate to lead the Government. The options at stake presented background differences despite belonging to the same post-convergent space. Borràs, very close to the former president Quim Torra, is a newcomer to the political party that the Generalitat leads the confrontation with the State. Calvet, on the other hand, has been in office for decades in different positions in the Generalitat and the Sant Cugat City Council under the leadership of Convergència and represents a more moderate independence movement. The minister had the support of the imprisoned leaders Josep Rull and Joaquim Forn.

The pull of Borràs between the rank and file of the Puigdemont party had already been demonstrated in the voting for the Junts leadership last summer and has been confirmed again in the primaries this weekend to choose a candidate for the Generalitat. Of the 5,128 members of the Junts with voting rights, 76% (3,898) have participated. Borràs has obtained 75.8% of the votes (2,954) while Calvet has obtained 20.5% (799). 145 people have voted blank.

In statements after knowing his victory, Borràs has extended his hand to Calvet. “Today no one has lost, Junts per Catalunya and democracy have won; everything begins today and we all have to be there”, said Borràs, who thanked the vote of all the affiliates and “in a special way” that of the former president Torra. “We do not have to choose between management and independence because what we want is to manage independence,” added Borràs, who has put himself “at the service” of Puigdemont and the sovereign prisoners. Calvet has also put himself “at the service” of the project that Borràs will lead “to achieve independence and govern well.”

With the election of Borràs, the party has chosen a defendant for corruption to preside over the Generalitat. Being a deputy in Congress, Borràs remains under investigation by the Supreme Court for prevarication, fraud, embezzlement and documentary falsification in relation to the supposedly irregular contracts that the Institution of Catalan Letters (ILC) signed with a friend of his when he presided over the entity. Once she is chosen as a member of Parliament, the case will go from the Supreme Court to the Superior Court of Justice of Catalonia (TSJC), a body before which the representatives of the Catalan Chamber are assessed. Borràs has been claiming that the cause is a “political persecution” against her.

Borràs’ victory also confirms that the three spaces that emerged from the disintegration of Convergència will have women as candidates to preside over the Generalitat: the former councilwoman Àngels Chacón and the former deputy Marta Pascal have already been chosen as the candidates of the PDeCAT and the PNC. The ‘comuns’ will also have a woman as the headliner, the deputy Jéssica Albiach. While waiting for the CUP, which is not yet presidential, the candidates from the rest of the parties will be men: Pere Aragonès (ERC), Carlos Carrizoza (Citizens), Miquel Iceta (PSC), Alejandro Fernández (PP) and Ignacio Garriga (Vox ).

On the political level, Borràs’ leadership allows Junts to offer the pro-independence electorate a more differentiated option Aragonès, who is currently the winner in the polls and has a management profile more similar to that of Calvet. Borràs has already directed several darts at ERC this week against the budget pact between the Republicans and the Government. “It is an agreement that is not positive for Catalonia,” declared Borràs, while insisting that JxCat’s commitment is “for independence.” The pre-campaign has only just begun.