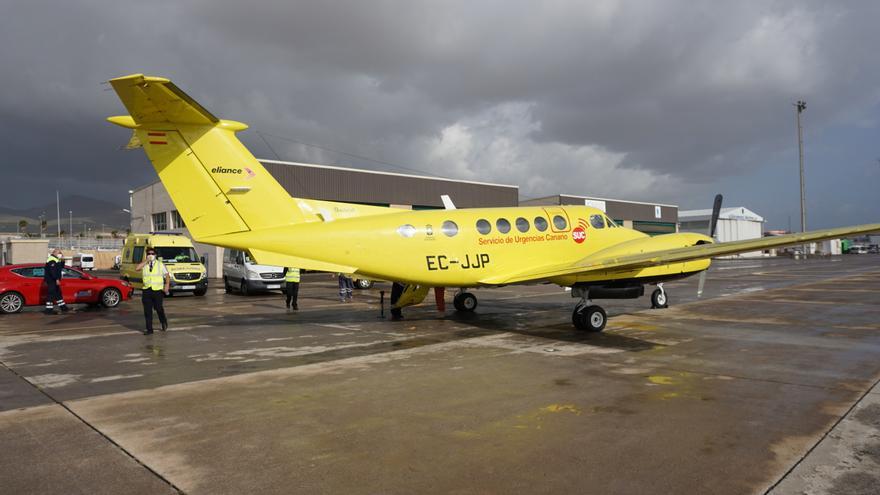 The medicalized plane of Canary Islands Emergency Service (SUC) It is the only resource that guarantees medical supervision in the transfer of critically ill patients from Canarian hospitals to reference hospitals in the peninsular territory. This is the case of large burns, neonates and infants with congenital pathologies or for specific treatment of certain tumors, patients with rare neurological pathology or highly complex congenital heart disease.

This aircraft carries out transfers to the Peninsula mainly to the Madrid hospitals 12 de Octubre, La Paz or Puerta del Hierro; to the Virgen del Rocío Hospital in Seville and the Guttmann Institute, in Barcelona.

But in addition to these peninsular services, the medicalized plane also carries out the transfer in the Canary Islands of patients admitted to hospitals located in the peripheral islands and who due to their pathology have to be referred to the hospitals with the highest level of care in Gran canaria or Tenerife for a specific intervention or to receive a specific treatment.

In 2020, this service moved to 829 patients between the Islands and the mainland territory, the SUC reported today. The medicalized aircraft is one of the basic links in prehospital action in the Canary Islands, which depends on factors such as the uniqueness of the island, the distance between a patient and their referral hospital, or the pathology that it presents to determine the importance and suitability of each type of transport.

Launched in December 1994, it is based in the Gran Canaria Airport where his crew, composed of a commander and a second pilot, and the medical team, made up of 7 doctors and 7 nurses, who rotate 12-hour shifts, all with extensive experience in the hospital and pre-hospital health emergencies sector.

The team is made up of 7 doctors and 7 nurses, who rotate 12-hour shifts

Lazaro Carrera, 56, is one of the doctors who for seventeen years has worked in the air resources of the Canary Islands Emergency Service. Aware of the geographical characteristics of the Canary Islands, insular territory and far from the Peninsula, highlights the importance of this medicalized resource since it allows to respond to patients with specific pathologies and who require a first level treatment in peninsular hospital centers without forgetting the complexity of these transfers. “Any patient can suffer a complication on board, from an anxiety crisis to the aggravation of his ailment, either due to movement, altitude or the weather,” he adds.

Regarding inclement weather, Lázaro points out that “in the month of September, during the transfer of a patient to Barcelona, ​​a rain with abundant hail hit us unexpectedly, and the truth is, we were very afraid, but thanks to the expertise of the pilots everything was in a scare ”. Complications that are added daily to the work of patient care so that their transfer is carried out in optimal conditions.

“In September, during the transfer of a patient to Barcelona, ​​we were unexpectedly rained with abundant hail and we were very afraid”

On other occasions, it is the patient’s own pathology that keeps the medical team on alert throughout the flight. “I remember the transfer of a patient with severe cardiovascular disease who we thought was dying and yet after a few months we found out that he had recovered and was back. Cases like this make us very happy and encourage us to continue ”.

Pablo Jose HernandezThe 55-year-old, with twenty years of experience as an intensive care and emergency physician, has been part of the staff of professionals working in the SUC’s air resources for two years.

For Pablo, the medicalized airplane is a fundamental resource to support the network of mobile emergency resources. “It is a very effective aid tool to solve between islands quickly, with health supervision, the health problems of very delicate patients.”

Air transport has also had to adapt to the new health situation due to Covid 19, since on many occasions patients infected by this virus have to be transferred. “The most complicated thing is the evacuation of infectious patients and / or with vital supports, since personal protection equipment, in a space as small as the cabin of the plane, hinders rapid mobility in emergent situations”, he adds.

When Pablo talks about the reduced space in the cabin, he knows very well what he means, since he is almost two meters tall and his physical complexion is robust. “As I am very large, I remember that the turbulence during a Tenerife-Madrid flight caused me to not stop jumping in my seat against the window and the roof of the plane. When we landed in Seville to refuel, I got off the plane with dizziness, nausea and some bruises on my left arm, so I even considered not continuing. Logically, it was something that I immediately discarded since we had the responsibility of arriving as soon as possible in Madrid, where the hospital’s cardiovascular surgery service was waiting for the patient.

And it is that the satisfaction that one feels when transferring a delicate or serious patient and that when he arrives he thanks you or hugs you for having reached his destination, are gestures that, according to Pablo, give you the strength to continue helping those who they need you.

The happy ending of a girl with a bad prognosis

The story of Ana garcia, 35, is quite similar to Pablo’s. She has been a nurse for three years on the medicalized plane of the SUC, her professional career has always been linked to the emergency and emergency sector, both hospital and out-of-hospital in advanced life support ambulances of the SUC.

For Ana, working as a nurse on the SUC medical plane is very rewarding despite the fact that on many occasions she has to face challenges or adverse situations since the workspace, in addition to being very limited, is in the air. “Working in a space as limited as an airplane cabin and being subject to turbulence is not always easy and especially when we have to do everything possible so that the patient is affected as little as possible”.

In this regard, for Ana communication with the patient is essential. “Many times being in the air causes anxiety situations that must be controlled for the transfer to develop successfully and the patient to remain stable.”

Ana emphasizes that to carry out this work it is important to develop some skills, although above all there is always “to keep calm and work as a team”.

Throughout these three years of work on the medicalized aircraft, there have been many flights in which the weather conditions have not been favorable. “I remember a guard in which we made a flight from Gran Canaria-Tenerife, Tenerife-Seville and Seville-Barcelona with turbulence at various points along the way that when I got home I had the feeling of continuing to jump, even if I was on the ground.”

Among the complicated services with a happy ending, Ana remembers the transfer of a girl with a very complicated clinical situation and a poor prognosis. “During the flight, which took us a long time, both the doctor and I went with the sensation of having a lump in our throats.” Two months later, Ana intervened in the transfer of that girl back to the hospital on her island, already recovered and with the prospect of soon receiving medical discharge and, as she indicates, “these situations leave us feeling satisfactory as we feel part of the process. recovery of the patient and that the story had a happy ending ”.

Characteristics of the medicalized aircraft

The SUC medicalized aircraft is a BEECHCRAFT, SUPER KING AIR 200 model, with a range of six and a half hours and a cruising speed of 260 knots (480 km / h). It has the capacity to transport three patients, one on a stretcher and two seated, in addition to the four members of the crew, that is, commander, second pilot, doctor and nurse both on inter-island flights and to the peninsula.

Regarding health equipment, the aircraft has electromedical equipment such as a defibrillator monitor to attend to those patients who suffer a cardiorespiratory arrest, perfusion pumps to deliver certain medication gradually and a respirator to provide assisted ventilation to patients with respiratory failure .

In addition, for the transfer of premature newborns, the SUC medical aircraft has an incubator, which allows their assistance and treatment during the flight, and a pediatric respirator.