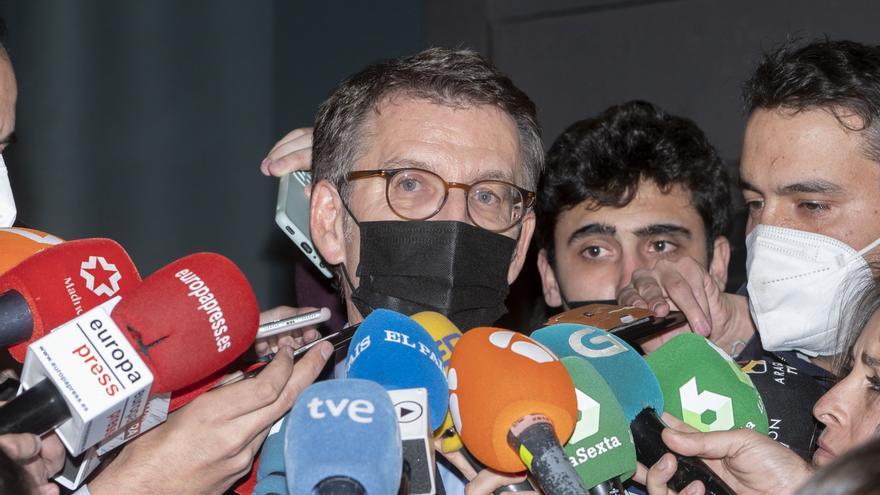 The conclave in Genoa lasted yesterday until early this Thursday. The meeting of territorial barons came out with a double unanimous agreement: Pablo Casado will remain as president until the extraordinary congress, which will be held on April 2 and 3. Some ideas and statements that came out of the appointment.

A "dignified" exit. Casado yesterday achieved what he had been demanding: a dignified exit. The president of the PP will remain in office until the next congress after avoiding pressure from the barons, who yesterday asked for an immediate resignation to begin the transition.

Casado will support Feijóo. Parallel to that decision and surely as a result of it, Casado has promised to support the Galician leader. Sources from the PP leadership assured the journalists present at the national headquarters on Génova Street in Madrid that "Casado has asked [Alberto Núñez] Feijóo to present himself". Both leaders held a meeting prior to the meeting of the territorial leaders.

Gamarra will coordinate the party until the congress. The spokeswoman in the Popular Congress will exercise daily direction until the congress from which the next leader emerges. She will do it as general coordinator of the PP, a figure that she had not dealt with during Casado's mandate.

The barons love Feijóo. "If you ask me, Alberto Núñez Feijoo has to be the candidate", the phrase is from the Andalusian president, Juanma Moreno, who yesterday, brought together several territorial leaders, came out to defend the president of the Xunta as the favorite for the next congress. Carlos Iturgaiz, Fernando López Miras or José Antonio Monago have publicly supported that position.

But Feijóo remains in doubt. "I am not going to make any assessment about filling a vacancy that is not such, or about presenting to a congress that has not been convened," said the Galician president last night, before ironizing: "Until it is convened, it would be very surprising that it comes a gentleman to say that he introduces himself".

You can read the entire chronicle of what happened in Genoa 13 during the meeting in this text by Aitor Riveiro.

An analysis of the calendar and the steps that remain now until the next congress. It counts David Noriega.

Albares calls for the cessation of the "unjustifiable" Russian attack on Ukraine: "It is a flagrant violation of international law"

The Minister of Foreign Affairs, European Union and Cooperation, José Manuel Albares, He called this Thursday for the cessation of Russia's attack on Ukrainewhich he considers "unjustifiable" and a "flagrant violation of international law".

"The unjustifiable Russian attack on Ukraine is a flagrant violation of international law," the head of Spanish diplomacy wrote on Twitter, after Russian President Vladimir Putin announced "a military operation" in the region on Thursday. of Donbas after the request for military aid by the self-proclaimed republics of Donetsk and Lugansk.

Albares has condemned the Russian aggression and has asserted that Spain is coordinating with its partners in the European Union and NATO allies "to respond to it".

Likewise, he has joined the words of the President of the Executive, Pedro Sánchez, who has also conveyed a message of solidarity with the Ukrainian people and Government.

Follow the last hour of the crisis in Ukraine in this minute by minute.

The President of the Government, Pedro Sánchez, has condemned this Thursday Russia's aggression against Ukraine and has assured that it remains in "close" contact with the partners of the European Union and NATO to coordinate the response.

This has been transferred by the leader of the Executive in a message that he has published on his profile on the social network Twitter after the Russian president, Vladimir Putin, announced this Thursday "a military operation" in the Donbas region after the request of military aid from the self-proclaimed republics of Donetsk and Lugansk.

"I remain in close contact with our partners and allies in the European Union and NATO to coordinate our response," the aforementioned publication concluded.

The last hour of the crisis in Ukraine, minute by minute.