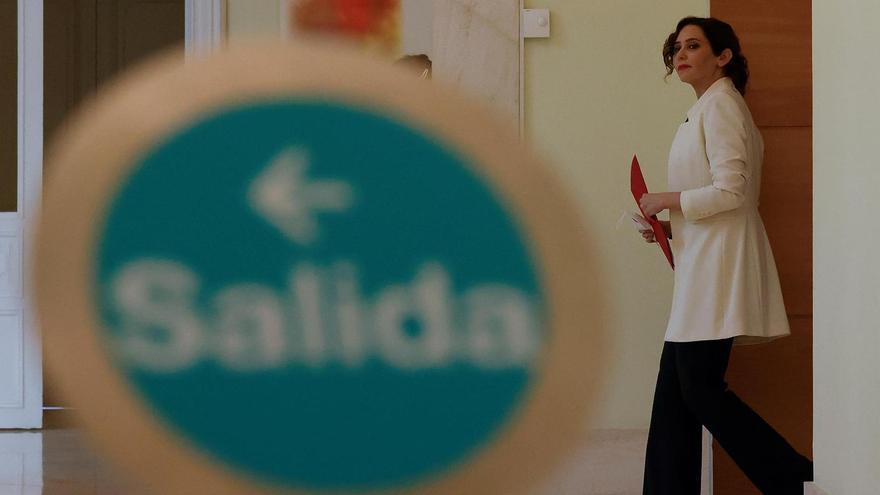 The president of the Community of Madrid, Isabel Díaz Ayuso, has suspended the visit she had planned for this Friday to a pharmacist after crossing accusations with the national leadership of her party and acknowledging that her brother received a commission from a contract of 1 .5 million euros awarded by your Government.

Ayuso was going to go to the facilities, in Colmenar Viejo, of Pharmamar, a Spanish pharmaceutical company dedicated to researching medicines of marine origin that is working on a drug against the coronavirus.

This visit, scheduled for days, was held yesterday despite the events but early today it was canceled, as reported by the regional government, without specifying the reason. Also the Minister of Health, Enrique Ruiz Escudero, has suspended his visit to the Central Hospital of the Red Cross San José and Santa Adela.

The Council of Ministers, in an extraordinary meeting, approves the science bill this Friday that seeks to improve the professional career, provide it with greater stability, reduce administrative burdens and reinforce the transfer of knowledge.

In addition, the reform, in an additional provision, guarantees stable public financing in R&D&i and its growth until reaching an investment of 1.25% of GDP in 2030 -now it is 0.58%-, in accordance with the goals set by the European Commission and as stated in the draft of the pact for science.

The text modifies the Law of Science, Technology and Innovation of 2011 and arrives this Friday at the table of the Council of Ministers after the completion of the public hearing process, in which associations, scientific societies and individual researchers have presented more than 4,000 comments, many of them about compensation for predoctoral students for termination of contract.

What's more, the ministers will approve the animal protection law today, that regulates the relationship with pets and responds to the feelings of society not to tolerate the mistreatment, abandonment and sacrifice of animals.

The approval of the future norm, from the Ministry of Social Rights and the 2030 Agenda, will establish zero slaughter as one of the key points, that is, pets cannot be slaughtered.

Casado will reappear this Friday with an interview on Cadena Cope

The leader of the Popular Party, Pablo Casado, will reappear this Friday in a morning interview on a radio station after the internal war with the president of the Community of Madrid, Isabel Díaz Ayuso, and after the national leadership of the PP announced the opening of an informative file.

In this way, Casado will speak in an interview at 9:05 a.m. on the Cadena Cope program 'Herrera en Cope', which is directed and presented by the Andalusian journalist Carlos Herrera.

It has been the general secretary of the 'popular', Teodoro García Egea, the one in charge of publicly answering the Madrid president from the headquarters of 'Génova' after Ayuso has harshly charged the national leadership of the PP for manufacturing "alleged corruption" against her without evidence and has demanded that responsibilities be purged.

In this context, Egea has announced that the party's legal services are studying whether to proceed with legal action against the president of the Community of Madrid in the face of "very serious, almost criminal accusations" against President Pablo Casado and the national leadership.