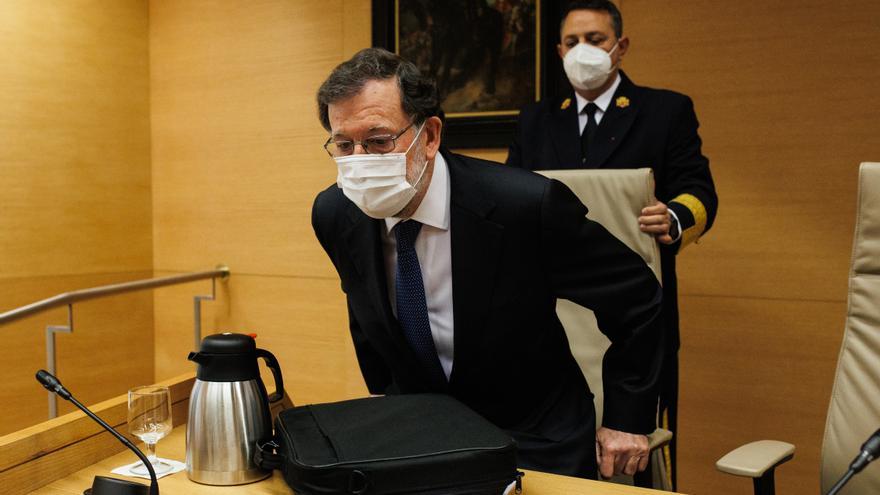 Press conferences to present his latest book. Appearance in the comedy program 'El Hormiguero'. Appearance in the investigation commission of the Kitchen operation. Mariano Rajoy is having a very intense activity on stage in what seems to be his final farewell to the world of politics. In addition to the logical interest of selling his book, the former president has shown himself as the retiree who no longer has an interest in remembering the bad things of his past, because at this point it doesn't matter. And if they push you a bit, you can always resort to the humor that consists of telling everyone that life is hard and that you should not be nervous. It is a cynical point of view, but it is enough to pretend that the Gürtel case or his trial never existed, or that the Bárcenas case had to do only with Bárcenas, and not with the Popular Party. And for everything else, a joke to hang out with.

If you did not care much about reality when you were Prime Minister, how will you now that you are dedicated to making money as a property registrar and enjoying family and friends.

In his statement before the Kitchen committee, he demonstrated two facets of his past as a parliamentarian: going through the issues above and only hardening the speech if they push him a little. He had it easy in the questions about the alleged calls or contacts he had with Commissioner Villarejo when a group of policemen were looking for the evidence that Luis Bárcenas had against the PP, not to present them precisely in court. The policeman who has sprinkled Spanish politics with the content of the recordings he made in secret has never shown proof that these calls existed.

Other police officers have declared in court details about the Kitchen operation that confirm its existence. They are relevant testimonies to the proceeding of people who had a significant role. Given this, Rajoy takes advantage of the right not to know anything about matters that are currently being investigated unless there is a firm and corroborated sentence by the Supreme Court, which does not yet exist. But regarding criminal acts that have already been tried, he offers the same level of denial of reality, which is only a continuation of what the leaders of his party have been doing for some time.

This is the case of the existence of box B of the PP, fed by donations from businessmen, which was used to pay all kinds of expenses, including the expensive rehabilitation of the headquarters in Genoa. "There is no court that has affirmed that there was a box B of the PP," he said on Monday. The denial could not be more blunt or more false. There are three sentences on two cases (Gürtel and reform of the headquarters) that mention it as a proven fact. Edmundo Bal, from Ciudadanos, read him an excerpt from page 1,077 of the Supreme Court ruling on Gürtel that defines the existence of box B as "valid and sufficient proof of charge." It was completely the same.

His position differs somewhat from the usual one in the leadership of the PP in these cases of corruption. In the first place, it is said that it did not exist. When proven, it is said to belong to the past. Rajoy cannot assume the second position, because he is last. There it only remains to take refuge in lies or in legal disquisitions with which he hits a hose so that the field of play is impractical.

Throughout the investigation of Kitchen's corruption, various media have cited sources from the current leadership of the PP who stated in other words that they were not going to eat the brown that Rajoy and Jorge Fernández Díaz had left behind. But this Monday it was time to keep the forms and wrap up their old leader. Therefore, who intervened on behalf of the party was not its usual spokesperson, but the spokesperson for the parliamentary group, Cuca Gamarra. He did what the former has always done: dismiss the existence of the commission as an attempt to tarnish the immaculate reputation of the PP.

That the commission coincided with the investigation of the case already made it clear that it was not going to be of much use. Even so, it refers to alleged crimes committed by the political leaders of the Ministry of the Interior and part of the police leadership. Gamarra did not think that this is a sufficient reason - "the truth is not sought here" - and that she has demanded in this legislature that investigative commissions be launched on the hospitalization of the leader of the Polisario Front in Spain and the subsidy to the airline company Plus Ultra.

What happened with Kitchen in the attempt to end the evidence that Bárcenas could have against the PP is very serious, but, with Rajoy on the court wanting to say nothing, it was inevitable that he would try to redirect the interrogation with rajoyismos or sarcasm. They mentioned to him that some commissioners called him El Barbas or El Asturiano. "To me, as if they call me El Chino" (drums after the joke). Twisted sentences that try to be clear through the confusion: "I come here to answer the questions that you ask me and I have to tell the truth. It is very easy to say 'you say this, but it is not true'. And then How do I show that what I say is true? " (double tap of drums).

He only warmed up with some questions from Gabriel Rufián. The ERC spokesperson went to the neck from the beginning: "Why are you lying?" Rajoy thought that he could answer with the same ones. "Here the one who lies is you." The harsh interrogation method was not very helpful either. Rajoy immediately returned to the field of comedy: "Don't take it for granted, you live happier."

There was a moment before when the joke and the politics hugged each other as if they were just one. The spokeswoman for United We Can, Sofía Castañón, He referred to the series 'Venga Juan' in which Javier Cámara plays a Spanish politician so inept and mediocre that it is funny. Pathetically funny. Castañón cited a scene in which someone destroys a computer with a wrench, which is reminiscent of Bárcenas' computers that were brutally formatted in Genoa. The series uses the worst of politics to laugh at her in a typical example of black humor. The intention of Castañón was not very clear when taking this example, because immediately afterwards he asked about Villarejo.

Everything we are seeing, what this article tells, what the media reports, is only the draft of future installments of television series. There is time to improve the script, but it will be without Mariano. We lose our laughter and enter another world. Casado also denies the corruption that appeared in the PP and the funniest thing he has done in politics is grow a beard.