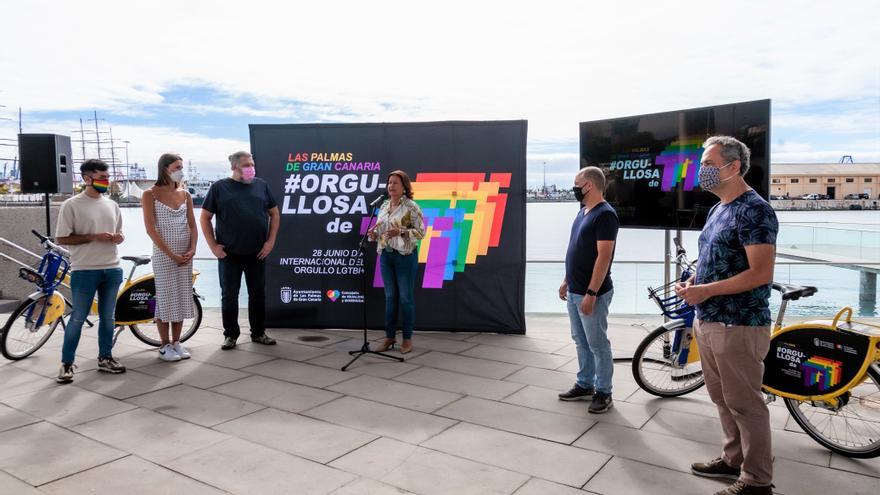 The Councilor for Equality and Diversity of the City Council of Las Palmas de Gran Canaria, Mari Carmen Reyes, has presented the municipal campaign to commemorate June 28, International LGTBI + Pride Day. With the motto Proud of you, the campaign highlights the diverse character of the capital of Gran Canaria, through the enhancement of the people who are part of the collective and with a wide program of cultural activities that will take place from today until next Monday, June 28.

Mari Carmen Reyes has assured that “Las Palmas de Gran Canaria is a city proud of its diversity, of its citizens and of the values ​​that mean us as an open, free and committed city with the human rights of all people, regardless of their sex, gender, age or race ”. In this sense, the councilor explained that “the objective of this campaign is to make the LGTBI + movement visible, which has historically had such importance in our capital, and to involve all the inhabitants of Las Palmas de Gran Canaria through various activities of a nature culture that put the focus on freedom, equality and diversity ”.

A) Yes, On Tuesday 22, at 5:00 p.m., the initiative will be presented in the Plaza de España Lettering with Pride, which will feature a storytelling session led by Marta Marco and four LGTBI + themed book presentations by their authors: Three good guysby Pablo Wessling; The scramble of insects, by Manuel Gerardo; The Saint to heaven, by Carlos Ortega; Y In black and whiteby Prado G. Velázquez. Tickets can be obtained for free at www.entrees.es/busqueda/letras-con-orgullo.

On Friday, June 25, the LGTBI + flag will be raised in the Town Hall, with the presence of the mayor, the councilor, the municipal spokesmen and different representatives of groups in the capital of Gran Canaria.

On Saturday June 26, there will be a guided bike ride, called 'Ruta Arcoiris', which will go through the most relevant streets for the history of the LGTBI + movement through the city of Las Palmas de Gran Canaria. The meeting point will be Calle Juan de Quesada, at number 22. Registrations can be made free of charge by email. [email protected].

The same day at night, the City Council organizes a show by 'Divas Disco' at the José Antonio Ramos Amphitheater in Doramas Park. Tickets are free and can be purchased through the page www.orgullosadeti.es.

On Sunday June 27, the Department of Equality and Diversity has organized a Cinema Forum in the movie theater of the Castillo de La Luz, where the documentary about the Gamá collective 'Miradas con pride' will be shown. Then there will be a table - debate with representatives of various associations. Those interested may register at no cost by email [email protected].

On June 28, International Pride Day, various events will be held. In the first place, at 10.00 in the morning, a new plaque in recognition of the historical memory of the LGTBI + movement will be inaugurated at the Don Vicente López Socas Sports Complex, a place of significance for the group as it became during the transition the scene of the first acts of the recently created Collective of Gay Men and Women of the Canary Islands.

This will be the second plaque of these characteristics in the capital, after the placement of the first, on May 17, in the Santa Catalina park.

At 6:00 p.m. on the same day, the City Council will open an art exhibition at the Pepe Dámaso Center, after which a colloquium will be held with several artists of special relevance to the world of culture and the LGTBI + movement in the islands. The entrance will be free respecting the capacity of the room.

Finally, during the night of Monday 28 to Tuesday 29 different public buildings with the LGTBI + flag will be illuminated in the capital. Among them, there will be the Town Hall, the Atlantic Wave Catwalk or the Alfredo Kraus Auditorium.

The motto Proud of you It may be visible throughout the city, with the aim of increasing the awareness of citizens and achieving their involvement with LGTBI + rights. Thus, the image of the campaign will travel the city aboard five Municipal Bus vehicles and 20 sitycletas, in addition to being installed on street furniture throughout the capital.

During the event, the councilor also presented the video made by the City Council on the occasion of this campaign. This audiovisual creation highlights the history of the LGTBI + movement in the city, from the Franco era of repression to the present day. Through different recognizable capital figures of different sexes, genders and ages, the video vindicates the diverse nature of the citizens of Las Palmas de Gran Canaria and pays tribute to all those who raise the flag of diversity.