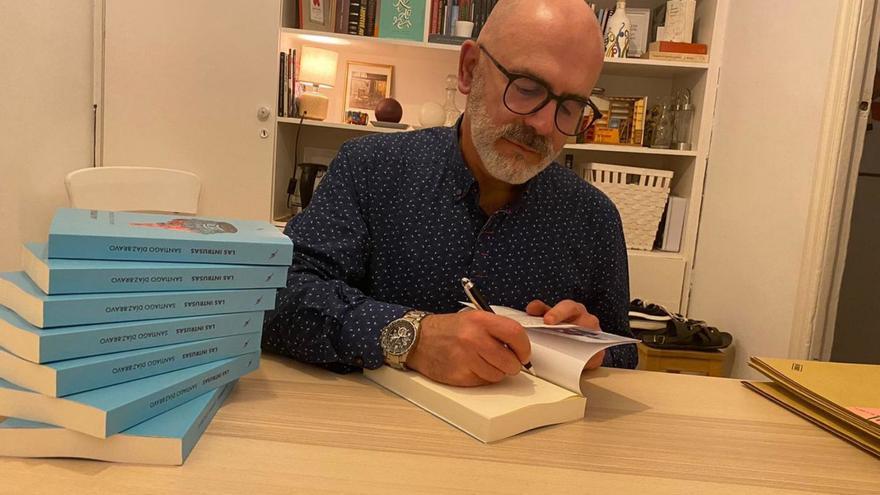 The writer Santiago Díaz-Bravo (La Orotava, 1968), based in London and with a long journalistic career behind him, publishes the novel ‘Las intrusas’ (Footer, 2021), the sequel to his controversial’ The man who was Friday ‘(Footer, 2020), which intersperses real scenes and characters from international politics with fictional antiheroes in a London beset by scarcity and violence.

How did the plot of Las intrusas, conceived as a sequel to your previous novel, but also framed in the UK, come about?

The plot emerges, in effect, as a sequel to The Man Who Was Friday, whose origin starts in a certain way from a personal experience. I was one of the Spaniards affected by the 2008 crisis, since I lost my job as a journalist and had to go into exile in the United Kingdom, where I am still ten years later. And at that time, a few years before, thousands of young Spaniards had already begun to come because, suddenly, the best-trained generation in the history of Spain, which had grown up after the dictatorship and had accessed the best training, was betrayed for that same country that formed it, which was not able to give them a future. This entire generation has been forced to emigrate to other European countries as the only way out, which has created a kind of resentment towards their own country. And that resentment, which ends up turned into violence, is the origin of The Man Who Was Friday, because what I did in that novel was to change history. From there, the plot lives on and the links between political and government violence were transferred to the United Kingdom in Las intrusas, because this is a phenomenon that is not only in Spain.

He says that one of his motivations was to show “that history is not over, that its lines are written every day,” against the “fullness of time” that Ortega y Gasset coined in 1929.

This is a phenomenon that occurs generation after generation, especially in affluent societies, which is the feeling that we have reached a point where nothing else is going to happen, which means that all Centuries that precede us have had the sole objective of reaching the current state of things and that, therefore, history has stopped. So, The Intruders wants to reflect that history can really change and that what we understand today as immovable can be totally different in two days. In this sense, what Las intrusas does is play to change history and take it along a bit extreme paths. Even so, I believe that, on many occasions, and I refer to many facts, reality still surprises us much more than fiction.

In what aspects would there be more truth in the fiction of your novels than in what political reality reveals in the media?

One of the powers that the novelist has is to use real characters at his whim, which I do in both The Man Who Was Friday and The Intruders. So, if reality offers me some characters, I simply borrow them. I have been a journalist for 20 years and journalists are a bit used to playing games and making use of reality. On the other hand, I do not know to what extent fictional characters exist because it seems to me that creating fictional characters is almost impossible, in the sense that the writer, like the journalist, is a kind of sponge that absorbs reality and transfers it to the paper. And that happens with fictional characters, who can only be products of experience. Nowadays, when we are bombarded by the media and social networks 24 hours a day, separating reality from fiction is increasingly difficult, even when it comes to building characters.

And does your journalistic gaze infiltrate your literary practice?

I think so, proposed, because what one writes is directly linked to experience and, as a journalist, that gaze is an intrinsic part of my facet as a writer. In addition, I think that throughout the two works there is an evident journalistic background, where not only real characters are mixed with fictional characters, but real events with fictional ones, so that they are part of the plot, for example, the assassination attempt to the King in Mallorca in 1995, the Panama papers or the war in Yugoslavia.

Has the level of violence in some chapters raised any controversy among readers?

In the case of The Man Who Was Friday, there were readers who found the level of violence in the novels unacceptable. Some even considered it a lack of respect towards some characters. However, the people who experienced that but, still, went ahead and finished the novel, found sense in this use of violence that makes some characters of flesh and blood participate in it. Yes, there was a certain controversy, but I understand that it is a totally admissible literary device.

And to date, how has Las intrusas been received?

At the moment, we already have the certainty that the readers like it and that they find both novels exciting. I think they are quite interesting, that they contribute things and that, in addition, they are very funny, because humor is very present. I understand that even in the most dramatic moments of existence, funny things happen. Humor is a paradoxical situation that is very present in real life.