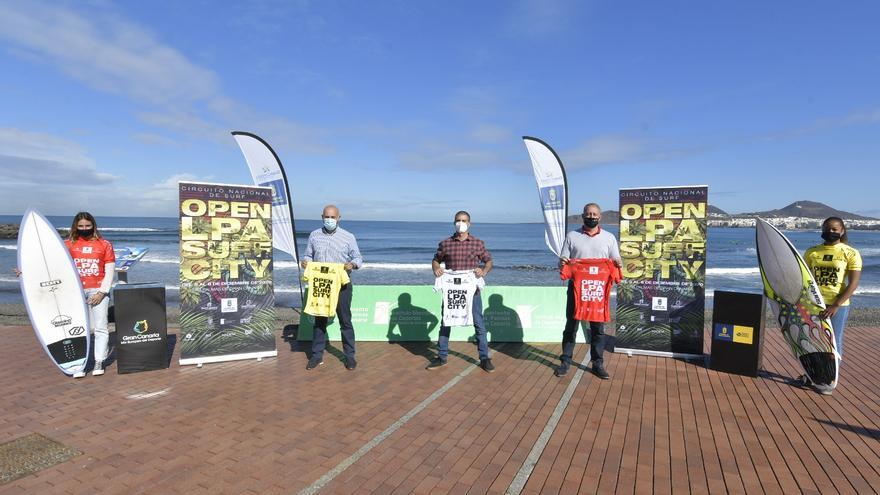 Today the 2020 edition of the OPEN LPA Surf City was presented, which makes Gran Canaria once again the headquarters of the best national surf of the moment, with the last scoring test for the national leagues Iberdrola Y FESurfing. As in previous years, the Cícer area, in the Las Canteras Beach, in the capital of Gran Canaria, will be the setting for the celebration of this competition December 5 to 8 which will feature the best surfers in Spain in the male and female categories. The Open LPA Surf City will be the most important test of both national leagues this year and the only one with a qualification of three stars Y 1,400 points in Game. It is the last national test, so the 2020 men’s and women’s national surfing champions will be decided in Las Palmas de Gran Canaria.

The presentation of the event, on Las Canteras avenue, was attended by Francisco Castellano, Sports Minister of the Cabildo de Gran Canaria, who highlighted the island as “the best destination in the world to practice outdoor sports”. In the context of COVID-19, the celebration of the event in the archipelago makes it a “safe destination for the health of tourists and to host events of any sporting discipline.”

He was accompanied in the act by the Councilor for Sports of the Las Palmas de Gran Canaria City Council, Aridany romero, which added the importance of the “urban environment, but also environmental. La Canteras, our jewel in the crown, creates an incomparable setting where economy, industry and tourism will be generated.” The conditions of the city are incomparable and is that “very few capitals can afford this and less in December.”

From the organization of the test, the director Sergio San Román has underlined the great level that will be seen in the waters of La Cícer, with the confirmation of the best surfers nationwide and a good forecast at sea, “a weekend with very big waves awaits us. You will be able to enjoy of an incredible show on this beach in Las Canteras “.

The FESurfing League and the Iberdrola League

The FESurfing League and the Iberdrola League return to Gran Canaria in a year in which numerous events have had to be canceled due to the global pandemic. This consolidates Gran Canaria as a safe destination both for the practice of sports and for holding leading sporting events on the national scene. Arona, Cádiz, Gijón or El Ferrol have been some of the venues for the tests of both leagues, which culminate the competition in the incomparable setting of one of the best urban beaches in the world for surfing, Playa de Las Canteras, in Las Palmas de Gran Canaria.

Both leagues aim to bring professional surfing closer to future promises, they offer a scholarship of € 74,000 that will be distributed equally among the first classified of both leagues. This is joined by € 4,000 that will award the Gran Canaria test to the winners of the Open LPA Surf City 2020.

The Open LPA Surf City 2020 will bring to Gran Canaria the best riders on the national scene, who in the men’s category are represented by the leader of the circuit, the Cantabrian Nestor Garcia, the Catalan Vicente Romero, the gran canario Luis Diaz and the current champion, the Basque Andy Criere, main contenders for the crown of the FESurfing League 2020. In women, Basque athletes stand out Garazi sanchez, Nadia erostarbe Y Ariane ochoa and the current champion of the circuit, the Asturian Lucia Martiño, which will play the national title in the waves of La Cícer. Together with them we can enjoy the best local Canarian riders, such as Tim elter, Moisés Domínguez or Jael Pena. And among the girls, Laura Coviella, Marcela machado, and the champions Lucia Machado Y Melania Suarez.

Gran Canaria, a safe destination through the waves

The organization of the Open LPA Surf City 2020 has developed for this edition an exhaustive plan of safety and hygienic-sanitary measures to guarantee the health of athletes, judges and staff. Bubble groups to avoid contact between participants, limited areas, mandatory use of a mask at all times, gels and regular hand washing will be the rules that govern the development of the championship. In the midst of the global pandemic generated by covid-19, the Open LPA Surf City 2020 is presented as a safe and high-level sporting event.

The island of Gran Canaria It is already an active tourism destination known and valued worldwide. Its mild temperatures 365 days a year and its climate, considered one of the best in Europe, its 236 kilometers of coastline, which attracts sailors, divers, surfers or deep-sea fishermen from different parts of Europe contribute to this. At a time as difficult as the current one, being able to celebrate a surfing championship of these characteristics and with all the guarantees that the health authorities require, also make the island a safe and reliable destination.

Playa de Las Canteras, in the capital of Gran Canaria, is thus a destination of excellence for surfing, both for athletes who come to the island thanks to events such as the Open LPA Surf City 2020, as for amateurs who practice surfing or fans of competitions and championships. Hence, both the City Council of Las Palmas de Gran Canaria and the Cabildo de Gran Canaria, do not hesitate to bet on the sport of waves as a catalyst for economic activity.