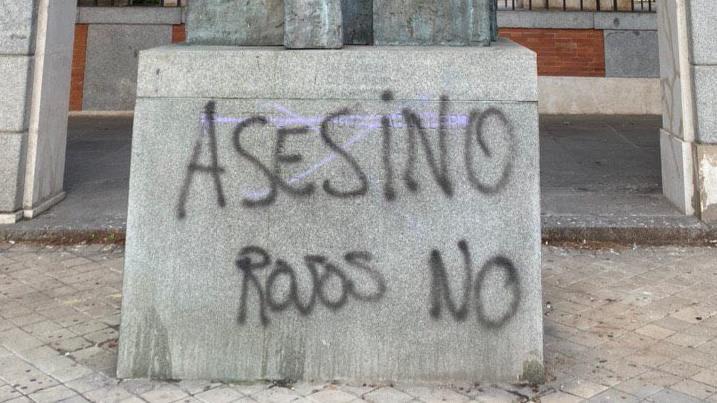 A sculpture by Largo Caballero located in the Nuevos Ministerios campus in Madrid dawned this Saturday with graffiti of “Murderer. Reds no” Vandalization occurs shortly after the decision of the City Council to erase the street map of the capital without a historical report previous names of historical socialists among which is also Indalecio Prieto.

“This is how Largo Caballero’s sculpture in Nuevos Ministerios has dawned today. Right and far right have used lies and historical manipulations to erase their figure from the Madrid street map. Now, that disregard for memory crystallizes in vandalism and incivility violence,” he denounced in Twitter the Minister of Labor and Social Economy, Yolanda Díaz, in front of whose offices is the figure.

Politics has denounced that “lack of respect for democratic values ​​and ignorance create the breeding ground for intolerance and expressions of hatred. We will not allow it. We appeal to the political responsibility of those who feed social tension and this dangerous forgetfulness “.

Vox imputes to the socialist and trade unionist Largo Caballero a “bloody political and personal trajectory” and blames him for the Paracuellos del Jarama massacre because he was “part” of the Republican government. The document links Prieto with the murder of José Calvo Sotelo because, the text says, “he introduced into his praetorian guard those responsible” for the crime and attributes “repressive work to him.

They do not think so one hundred historians, professors from Spanish universities and foreigners, including Paul Preston or José Álvarez Junco, who put their analysis “at the disposal” of the Madrid City Council to stop the change, supported by PP and Ciudadanos.

The signatory historians conclude, after analyzing the text of Vox approved in the Plenary of the City Council last week, that it is based “on old and discredited pseudohistoric clichés of Franco’s propaganda”. “It confusingly carries the civil war myths enunciated in 1939 by the Opinion of the Commission on the illegitimacy of powers acting on July 18, 1936”, says the letter, supported by renowned experts such as Paul Preston, Walther L. Bernecker, José Álvarez Junco or Antonio Cazorla.