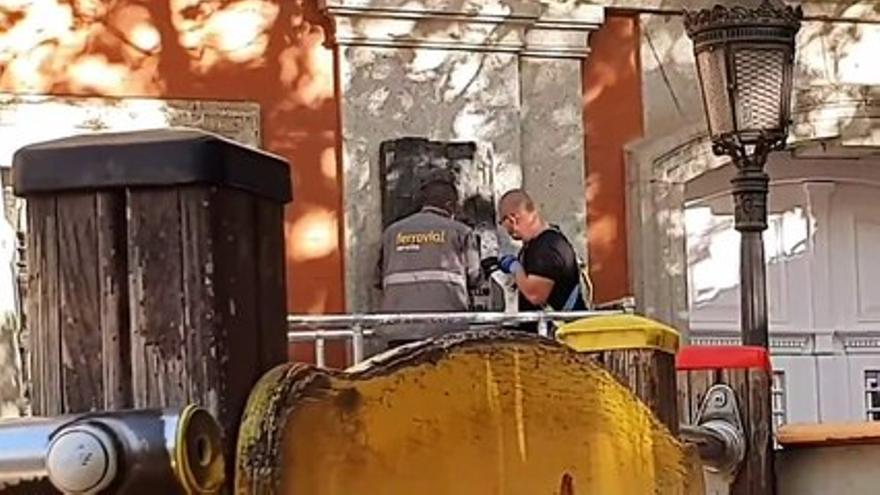 The Madrid City Council begins to execute Vox's proposal to remove all traces of the socialists Francisco Largo Caballero and Indalecio Prieto from the city. The corporation, led by PP and Ciudadanos, has ordered the removal this morning of the plaque that honors the former, former Minister of Labor and President of the Second Republic, in the Plaza de Chamberí. It was located since 1981 in the place where he lived –which is now part of the District Board offices– and is catalogedas one of the singular monuments of the Madrid City Council, within the Cultural Heritage of the capital.

"The historical truth makes its way [...] Vox keeps its word, "wrote the councilor of the far-right formation, Javier Ortega Smith, on Twitter after the dismantling of the monument. The official party account has marked the statue, vandalized during the last bridge, as the" next target " del Pilar with painted "assassin" and "reds not" claimed by Vox.

The opposition denounces that the plate has been uninstalled, How has Public progressed, without having taken the necessary legal steps to do so and will take the decision to court. More Madrid assures that the initiative "should have gone through the Governing Board" and be motivated by the Historical Memory Law. That is, justify why it can be eliminated under the protection of this rule. It has been expressed by the co-spokesperson of the party in the Community, Manuel Bergerot, in a video recorded from the Plaza de Chamberí while the workers proceeded to dismantle the monument. "Today we verify that the vandalism that Vox does in the streets threatening in front of a sculpture, the PP executes it from the institutions," he denounced.

"We do not know that there is a firm agreement by the District and Government Board. If this is so, it is an act of vandalism and we will denounce this illegal withdrawal," said the spokesman for the socialist group, Pepu Hernández, who affirms that it is a "new act of the three rights" and a "new concession to the demands of Vox". Hernández maintains that a decision of such depth requires a "firm agreement" from the Government or an authority ":" The agreement in this case is not firm in the minutes because it has not been published. "

The mayor of the capital, José Luis Martínez-Almeida, assured that the changes in the street map and in other symbols had to go through an administrative procedure, despite his team initially intended to remove the badges without a prior historical report. To questions from this medium, the Madrid City Council has not answered, for the moment, what type of procedure supports the decision.

The order to remove the commemoration monument has been given only three days after they appeared with graffiti of "assassins" and "reds not" two sculptures of the socialist leaders in Nuevos Ministerios. The vandalism actions were claimed in the official Vox account, from where the party issued a "first notice" to the Government of Spain to repeal the Historical Memory law.

The initiative, presented by the extreme right at the Madrid City Council, on which the dismantling of the plaque is based, has also been rejected by more than 200 historians, among them Paul Preston, when holding on to "clichés of Franco's propaganda ", according to experts.

The plaque was placed in 1981 on the old facade of the house where the former president of the Second Republic lived with the agreement of all municipal groups (PSOE, UCD and PCE). The initiative, proposed by former mayor Enrique Tierno Galván, was approved unanimously. The work was made by the famous sculptor José Noja Ortega, also the author of Largo's own statue in Nuevos Ministerios, and other plaques, such as those dedicated to Julián Besteiro or Pablo Neruda. Forty years later, and coinciding with the 151st anniversary of his birth, he has disappeared.