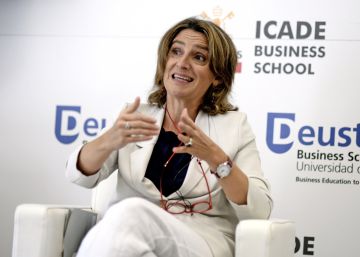 It is an old claim that, in view of the new regulation of renewable capacity auctions processed by the Ministry for the Ecological Transition, large electricity consumers have put back on the table. Specifically, they demand a quota for energy contracts that is awarded each year to renewable producers in the auctions, at the resulting price in the same. It is not about them bidding for capacity, but about reserving a part of the production of the winners of the annual auctions.

Currently, the electrointesive industry represents 15% of demand, of which 10% corresponds to the large steel, aluminum or zinc plants associated with AEGE. Precisely, this association, which has the support of the Ministry of Industry in its request, has held talks with the Ecological Transition so that the department headed by Teresa Ribera takes into account her claim in the proposed royal decree that develops the new system auction, which has not yet been approved. The objective, although it was removed from the text, is to auction 3,000 MW per year.

The industry wants to be a counterpart in the result of the new green auctions “as an alternative” to long-term private electricity supply contracts (the so-called PPAs) to emulate the French model, according to which, the State, through EDF reserves a part of the nuclear production for the French industry at a competitive and long-term price.

In Spain, renewable energy would play this role. The biggest obstacle, raised in its day by the Ministry of Economy, is that the contracts for the supply of that energy need the endorsement of the State. Because it is not the same for renewable producers to sell their energy for 20 years (at the price resulting from the auction) to the electricity system, as it is to private companies that cannot guarantee that they can honor the contracts for so many years.

However, according to industry sources, this problem has been resolved with the so-called Electrointensive Statute that the Ministry of Industry has been preparing for two years and that could see the light in October. Among the objectives of the statute is to alleviate the costs of CO2 emission rights and reduce the electricity bill for large industrial companies within the community legality. For the latter, a public coverage mechanism is established for long-term power purchase and sale contracts by the Spanish Export Credit Insurance Company (Cesce) through a fund and other guarantees. In June the Government approved an endowment for this fund of 200 million euros per year, to cover a maximum of 600 million in three years.

As explained in his day by the ministry led by Reyes Maroto, it is about generating a market where it is now failing, since there are no 10-year contracts for industries with traders and electricity generators, due to the high guarantees required of the companies, which means that now these contracts do not extend beyond three or four years. In order for industries to obtain those guarantees for PPAs provided for in the statute, they must contract 10% of their annual consumption for at least five years, once the fund starts.

Although sources of large consumers assure that the Ministry of Ecological Transition welcomes their request, it showed a certain resistance in its day, since reserving a part of the production derived from auctions at a fixed price for the industry (it is estimated that they will be awarded at a price between 20 and 25 euros / MWh) is to leave small or medium consumers without it.

Furthermore, the application of an industrial and a general quota in green auctions is not easy. At the moment, the interested parties recall, a 2018 rule eliminated the obligation for a consumer to contract energy with a single marketer, but could do so with more than one. But that standard is yet to be developed.