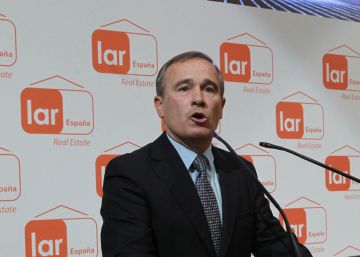 There are different types of brick: offices, homes, hotels, shopping centers … Lar España, the first socimi that was listed in Spain, in 2014, has specialized in the latter segment. Tflush sell the rest of the assets, has a plan to invest some 400 million until 2022 in centers and commercial premises, according to sources close to the company.

The real estate investment vehicle exhibits an enviable record, with 14 consecutive quarters of growth above the sector average in its 15 shopping centers. On the target it has three types of investments: small assets, which are complementary, such as the leisure areas of shopping centers, the projects developed by the socimi itself, such as the Lagoh center in Seville that will open in September, and the shopping centers in operations.

Evolution. Lar España went public for more than five years at 10 euros per share, and on Friday closed at 6.98. It has been damaged by the downward spiral of perception about the prospects of traditional retail. In the first half report the socimi reveals that the net value of its assets per share stands at 10.53 euros. That is, it should go up almost 51% to reach that valuation. It is, by far, the socimi of the Spanish Stock Exchange – not including the MAB, therefore – that quotes more discount. Merlin should go up 24% and Colonial, 2%. Lar Spain has developed a strategy to take advantage of technology, with a kind of robot portrait of the buyer that enters its centers, and with a strong position in leisure and in large brands.

Lar Spain's radar focuses on Andalusia, excluding the Costa del Sol, and northern Spain. Assets in operation must meet a series of requirements, including having an area of ​​influence of at least 250,000 inhabitants and being located in an area of ​​higher per capita income or key to tourism.

Lar Spain has the capacity to undertake these investments without having to go to the market. After two capital increases in the summers of 2015 and 2016 executed at a price per share lower than the net value of the assets, sources close to the socimi claim to have learned the lesson. These operations raised blisters on some of its shareholders, such as the management company Metagestión, which criticized the price and stated that, ultimately, they were incentives for managers.

The liquidity of 158 million at the end of June and the capacity for additional indebtedness give the firm a considerable margin of maneuver to invest. Lar España's net debt represents 33% of the value of its gross assets, when the critical threshold is 50%. Its Spanish rivals are more indebted: Merlin's level is 41% and Colonial's level is 37.9%.

In the socimi they defend that it is a good time to buy, thanks to the fact that several institutional investors and family office want to make cash. Of course, each new asset acquired must match or exceed the profitability of your current portfolio.

The firm, with assets valued at 1,462 million, reveals that they give a yield of 5.8% at the end of June. The commercial centers in operation, with around 5%, contrast with those of own construction, whose performance is shot at a range between 8% and 9%. However, this formula will not be used on a recurring basis, since managers prefer a more conservative strategy.

The socimi paid a dividend of 0.8 euros per share on May 26, which implies a return of 11.4% for Friday's close. Its objective is to place it at 5% with respect to the value of the assets and make extraordinary payments based on divestments.