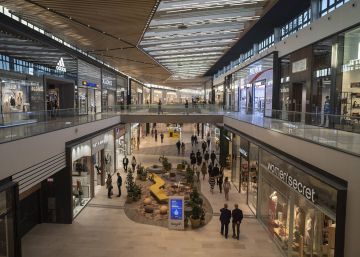 Lar Spain culminated 2019 with a good performance in the commercial sector, one of the most questioned in real estate, and managed to increase its revenues to 81.1 million euros, 4.2% more than in 2018. The final results of the listed real estate investment company (socimi) were however weighed down by a side effect of the strategic reorientation undertaken three years ago. Thus, profits went from 129.3 million in 2018 to 80.7 in 2019, 37.6% less. The fall is the result of the extraordinary sales of assets that took place two years ago: then Lar still had a luxury residential development in Madrid (Lagasca 99) and several office and logistics assets.

Last year that transformation was completed with the sale of two office buildings that remained in Madrid. But they were two small operations compared to those performed a year earlier. These lower extraordinary income, together with a lower revaluation of their properties (because they now have less), help explain the decline in profit. That is why the leadership of the socimi is not worried about that fact. “Now our shareholders are happier,” said Miguel Pereda, CEO of Grupo Lar, in relation to the decision to redirect all the company’s activity to the commercial sector.

The socimi owns 15 shopping centers, four shopping parks and 22 supermarkets scattered throughout Spain that last year showed a good performance. Its value during the year improved 12.7%, to 1,552 million euros. The income received by the rental of these spaces increased by 9% compared to 2018 and their occupancy rate stood at 96.5%.

In addition, the 64.5 million visits received by its centers, 1.9% more than in 2018, improved in a negative general environment (the influx in Spain fell by that same percentage, 1.9%, according to the INE ) and served to increase sales by 4.4% (above the Spanish average of 2.1%) to 815.2 million. Each visitor to those spent an average of 87 minutes in one of those shopping centers, a brand that the company promises to beat this year after the inauguration of Lagoh, a shopping center in Seville that has become its active star, last October.

The 2019 accounts have also served to take stock of the first five years of life of Lar España (Grupo Lar, with five decades in the real estate sector, created the socimi in 2014). In that five years the company has decided its specialization in commercial assets, although its refusal to enter the call high street (shops at street level) remains flat. The revaluation of their properties, with respect to what they were worth when they were acquired, is 55%. But the management of the socimi understands that the most expansive phase of the real estate cycle has already passed and therefore the growth will be different. “We treat investments with a certain opportunity,” Pereda said. The company prefers not to detail what capital it has to invest, but it is open to the purchase of new complementary shopping centers to those it already has. Nor does it rule out the promotion, following the satisfactory experience of Lagoh. But while these opportunities arrive, he will settle for the real estate reform he already has to improve the profitability he obtains for them.

The share buyback will also be maintained, for which a third program has been launched. Lar Spain was the first socimi that reached the continuous market (then followed by the two giants Merlin and Colonial) and since 2014 its actions have suffered several ups and downs, weighed down by the perception of investors regarding the real estate sector and particularly regarding the commercial subsector. This Friday the price has closed with a value of 7.19 euros per share, with a gain in the day of 0.84%. The dividend derived from the 2019 financial year that will be proposed to the General Meeting of Shareholders is 55 million euros. This amounts to 0.63 euros per share, with a 9% return on the market capitalization with which the company closed last year.

The Commission delivers to Spain 6,000 million for ERTE