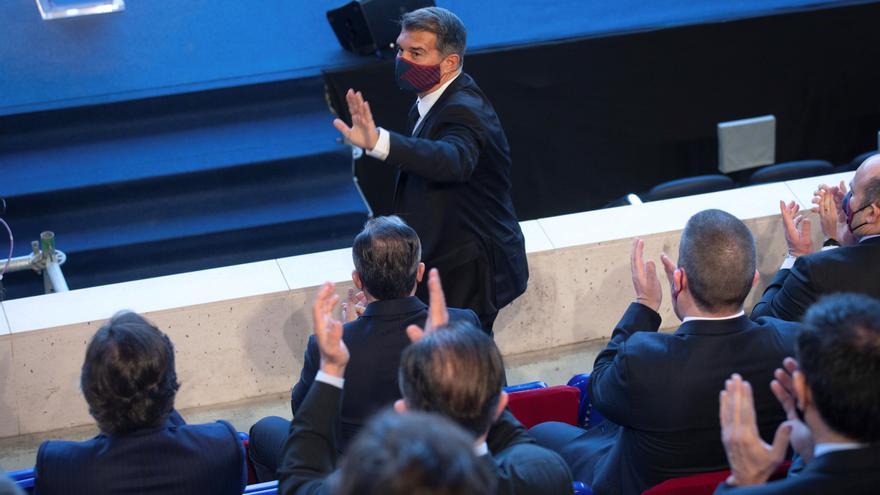 The new president of the FC Barcelona, Joan Laporta, has taken office with an emotional speech with references to the founder Joan Gamper or Johan Cruyff, with messages of support for Ronald Koeman or Leo Messi and with the ambition to recover theto “successful relationship” with titles and the Champions League.

“Only God knows what it took to get here”, he paraphrased his friend, the deceased Johan Cruyff, in a long and paperless speech, told from memory and from the heart, with direct allusions to, among others, Leo Messi.

“I have come here to command and make decisions. We cannot do it alone. I will do my best for Leo to stay. Leo, you know that I love you very much and that Barça loves you very much. You know that if the stadium was full when you play, you would not want to go, “he addressed the Argentine, present in the Camp Nou.

In this sense, he wants to present you with a winning project that recovers the essence of the winning team that Laporta lived with in his first stage as president, between 2003 and 2010. “It is essential that joy returns to be able to face what I hope will be a splendid stage “he explained.

“You have to go for the Cup already for The league. We have conspired to win titles. Ronald, you know you have the confidence of this Board “, sent another key message, in this case, to the current coach of the first team.

With a “positive” attitude, Laporta wants to get away “from victimisms or catastrophies.” “I want to face this new stage with generosity and humility, with courage. Because you have to be brave to accept this. We have the challenge of doing it well, “he explained.

For this, it has all the players of the entity. “You are the soul of this club. You know me as president, you know the way I relate to you, I am here to help and protect you. You are not alone and we will accompany you on the road to success “, he assured.

“The team is improving and we are hopeful and sure that it will go further, we will make the necessary efforts, we have a very competitive team and we want to aspire to everything. We want to win, and win well. We want to recover the successful relationship with the ‘Champions’“, be sincere.

Laporta made reference to the Bernabéu canvas (‘You want to see you again’) in the campaign, and he also showed his more relaxed and ‘laportista’ face when he made allusion to this past dawn and to the sprint for the economic guarantee. “We have spent a night that … It was not a party, sure … We went to sleep very late, because the conditions of the guarantee that had to be deposited, ‘déu-n’hi-do’ (‘cloth’)” , he pointed.

A hallmark that will be present in a “strong leadership”. “But this is not incompatible with emotions and feelings. I remember that in 2003 I took office in another room and saw my father for the first time with tears in his eyes. I had never seen him before. Wherever you are, help me get it right and to be an example for the new generations, “he said excitedly.

The act of inauguration took place at the Camp Nou, in the area of ​​the presidential box, and it began with an emotional interpretation of Lluís Llach’s song ‘Un núvol blanc’ (‘A white cloud’) by Gemma Humet. A tribute to the partners who have suffered the consequences of the coronavirus pandemic.

An inauguration, despite the restrictions, massive. The 18 companions of the Laporta Board of Directors did not miss it, as well as captains and coaching staff of the different club teams, with Ronald Koeman, Leo Messi, Gerard Piqué, Sarunas Jasikevicius or Lluís Cortés, among others.

The ex-presidents of the club did not miss the appointment Joan Gaspart, Enric Reyna, Sandro Rosell and Josep Maria Bartomeu. The candidates Víctor Font and Toni Freixa were not lacking, nor were the members of the Management Commission that the entity has managed these last four months, with Carles Tusquets at the helm.

“Based on article 54 of the Statutes, I have the honor to announce the proclamation of Mr. Joan Laporta i Estruch as the new president of FC Barcelona”, Tusquets welcomed him, to the applause of the almost 300 attendees. “I congratulate you on the victory and I wish all the successes and successes in the management of the club, “he continued.