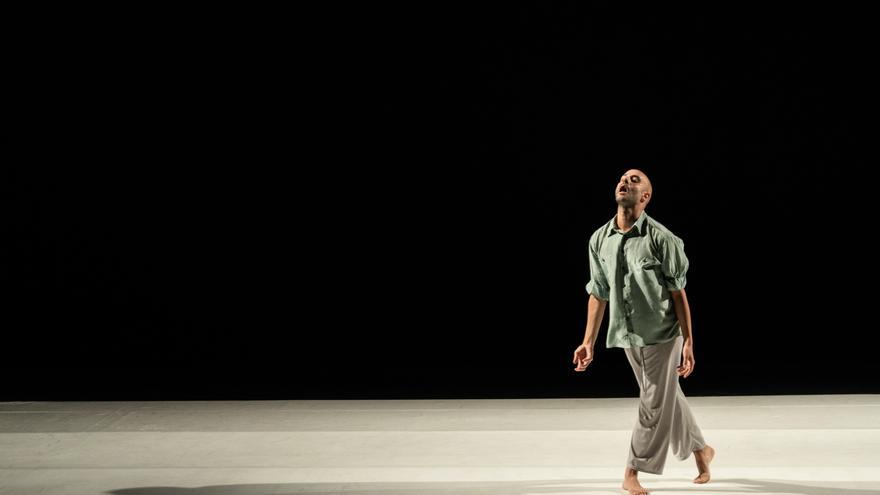 Wittgenstein said in his Tractatus logico-philosophicus, that book written in the trenches that the Viennese published just one hundred years ago: “What you cannot talk about, you have to shut your mouth (…) the limits of my language are the limits of my world”. There are things that cannot be said with language but that are reflected in language, I would also say, things that are in the interstices between words and sentences. The hollows of transcendence, the secret scale of San Juan de la Cruz. This is the planning of the new piece by Jesús Rubio, a piece in which he combines language and dance and confronts them. On the one hand, the word, a confessional, daily and intimate text in which language does not name but evokes, where the achievement of words is searching. On the other, movement, the dance of a mature blond, seated on stage, with balance as the center and movement as the axis.

Rarely do creative geysers, maturity of mind and body, and the right temporal circumstance come together. But sometimes yes. Those capricious stars have conspired in The beautiful mystery that unites us, the piece that Jesús Rubio presents next week within the Madrid Autumn Festival. Rubio already hatched in 2019 with his previous job, Great bolero, piece for twelve dancers that led him to win the Max awards for best dance performance. But that work was also a boost at the European level. Great boleroFor example, he conquered the public in Rome and the festival in that city decided to produce this new work, an event where this choreographer has just premiered the piece.

Rubio wisely decided not to repeat, change, abandon the large format, withdraw, look within. A project that Rubio has been working on since the end of 2017, and during which he encountered a pandemic, a pandemic that crosses the show. It is not trivial the amount of artistic works that emerged after this time of upheaval, isolation and bewilderment that try to find ways that transcend such a prevailing reality. But few like Rubio’s who know how to awaken the spirit of that Wittgenstein who makes up his Tratactus after the Great European War. A disbelieving but open place, aware of the limitations but looking for spaces for listening to the body, the sound between phoneme and phoneme, the matter present in the wake of movement.

In addition, this Saturday, November 20, Rubio premieres at the same festival, as a performer, the work directed by the choreographer Elena Córdoba, Creatures of disorder. The figure of Córdoba, who has accompanied Rubio in the process of creating his piece, is revealed as fundamental. “Elena Córdoba has been key for me. She has brought me back to the truly important issues. She put me at the beginning of the path when I had lost it. Elena has the ability to find correspondence between body and thought. Between action and sensation deep. It has the facility for the spaces of the inside to multiply and radiate outwards. That is for me the mystery of dance, to make visible what emanates beyond the body, from the body “, says Rubio.

The piece talks about death, love, the desire to transcend and loneliness. And he does it in a torrential way, letting himself be carried away by words and movement. A particular way of dancing, Rubio’s, where everything comes together, where repetition is never millimeter. “I try to start with simple movements of the body, change the pressure of the soles of the feet on the ground, find the way in which a knee bends or the air enters and leaves,” Rubio explains to this newspaper. “I try to pay attention to the way in which that body that is changing in action also begins to produce a series of sensations that, perhaps, are transformed into images. These images are sometimes visual, sometimes verbal. Sometimes they have to see with memories or with things that were imagined or that are imagined, suddenly, for the first time. Then a mass made of diverse textures, material and immaterial, visible and invisible, nameable and unnameable, is produced, which, in some way, portrays our nature and human power. It is this connection between physical action, listening and the production of imaginary spaces that feeds me. It is this connection that continues to amaze me at times, the one that continues to open a slight space in which the possible Beats the impossible “, tries to explain with difficulty this creator who is aware of the fragility of the subject matter in the piece.

The past is reborn in that verbal torrent that the piece contains. Rubio returns to 1992, to his parents’ house, where he shares time with his grandmother. He is 18 years old, he hopes to go to London to start his life. His grandmother is, on the other hand, waiting for death. He returns to March 2020 in the middle of the pandemic, locked up but escaping through his balcony where he has a plant that arrived from a trip and that now grows and branches … A memory that goes through memory spaces full of loneliness, love relationships, through everyday spaces where transcendence escapes at every moment, a memory that is even projected onto its future imagining a last dance in 2072 where there is no more technique … But that traveling through time has at the same time its mirror, Rubio walks through space through her dance, and dance, her body, also remembers: “My past often appears, yes, that initial desire when seeing others dance, feeling that I also wanted to dance. I wanted to dance in a concrete way I do not know if I would say classical, but it is related to the use of the matter of the body for a conquest of the spiritual, for the flight, for the turn, to compensate the feeling of lack, frustration or lack with something that I imagined com or fullness. I like to think that dance is one of the things that gives hope to the body, that it proposes the possibility that the body surrenders to something that saves it from its wound. And, at the same time, time goes by and dancing also connects you with the impossibility, with the lack, with the difficulty. There begins a kind of negotiation in which you have to accept all the ballast and trust that perhaps, at some point, you will arrive, as I say in the text, to a beautiful place, but accepting that it may not happen, “he explains.

In the piece he draws a parallel between language, the basis of human logic, and dance. The search for transcendence, the search for the unspeakable, the unsaid, at the same time Rubio activates the body: “Verbal language and movement are the two codes that have been given to me. Throughout my life, I have had different relationships. They have served me, they have coerced me. I have become angry with them and I have felt a lot of pleasure thanks to them. There is a brief moment in which you are certain that something like those matters (of words or movements) are currents that take you, that carry you, despite you. And then you can relax for a second, abandon the will and let yourself go. Those moments are mysterious, they are magical. Then you look back and not You know how you traveled that part of the way. This is the search that worries me and is exposed in this work, “explains Rubio.

Rubio, when talking about this relationship of reflection between language and movement, says: “If you pay attention, if you are sensitive to limits, you can see that one thing always leads to another. So we are linking words, we are joining steps, movements. I am very interested in those borders. How one idea is associated with the next, the way in which one action begins to transform into another. Also the fact that we name actions and that the transformation of actions challenges these names. and that there are names so complex that it is difficult to find actions for them “.

All these materials are present in this intimate work where the viewer shares the journey that Rubio undergoes. In a moment of the play he dances The Chacona, a piece that Johann Sebastian Bach composed when he learned of the death of his wife. Rubio prefers a more intimate version of the guitar, a version that seems to leave him more space to perform a luminous dance, where his body is centered and open as we are rarely given to contemplate from the stalls. When the viewer ends, he perceives that he has witnessed an exhausting journey, Rubio in turn says he is left “with the feeling of having gone through a kind of tunnel. I end up with a feeling of satisfaction because I feel that the body and mind have been capable of crossing that time and that space. Sometimes, when I think that I am going to do a solo pass, before doing it, it comes to mind that I will not be able, that it will be impossible for there to be something that moves without end during all that time. When I do it later, there is something about me that relies on the power of the body, the music and the imagination. And at the same time I do not have a clear memory of how it was. I’ve lost a while, I’m gone “.