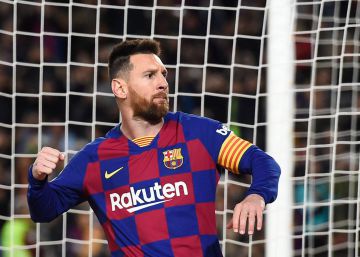 A shot of Busquets at the end of the crash and from the front was slipped into the goal of Rubén to the surprise of the Camp Nou, missed before the goal of a midfielder who barely sees the door. Confusing, too, because Barça added 277 minutes without scoring a goal with the ball in play; the last one dated October 29, at 5-1 over Valladolid. Time, however, in which Barça did make targets, all of Messi. As happened before Celta until Busquets said otherwise.

Barça fell against Levante (3-1) in a duel to forget, only with the only joy of Messi, who beat Aitor from 11 meters. Against Slavia, at Camp Nou, the team did not celebrate so much (0-0). And before Celta he did target four times. Three were from Leo –hat-trick number 34 in LaLiga that matches him with Cristiano Ronaldo—; Three with the ball stopped. “The rival has the prevention of not making mistakes, but with Messi anything is possible. He dominates it perfectly, ”he said Valverde. “They told us not to make mistakes, but with their dribling it's complicated, ”Olaza acknowledged; "And they have defined the game with the ball stopped." A situation that, however, is familiar to Barca players. "We have a big advantage by having the best pitcher in the world of fouls," he agreed Busquets; "Little by little it has been improving a lot, and … Look it was difficult!" And Sergi Roberto added: "It is a pleasure to have him because that way he also solves matches."

A gifted aim because he has already scored four direct foul goals in LaLiga, only three less than, for example, Celta (seven). “Leo is very special. He has made many mistakes in his career in this way. It's not normal, it has an impressive talent for this, ”he said Ter Stegen. “It is impossible not to depend on Messi. Any team would do it. It illuminates everything, ”added Valverde, who added:“ In addition to scoring, he has a great commitment to the game and sometimes, for whatever reason, we need something and go down to catch the ball. Interpret wonderfully. ” Although still not understood with Griezmann because in the first part they did not give any pass, even if in the second he gave him a goal that the French erred.

Not so Messi, who against Celta scored for the third time two goals of direct foul in a match: in the European Super Cup against Sevilla (2015) and in LaLiga against Espanyol at home (2018). In fact, he is the only one since the 2003-04 season that has achieved two goals of direct foul in two different matches in LaLiga. “I had to suffer as a coach,” admitted Oscar Garcia, who was premiering on the bench of Celta. As a sniper as few, La Pulga already counts 52 foul goals in his career; 46 with Barça and six with the Argentine national team. A luck that gives life to Barça.

Celta: Murillo: “In Vigo I was looking to resume football continuity”