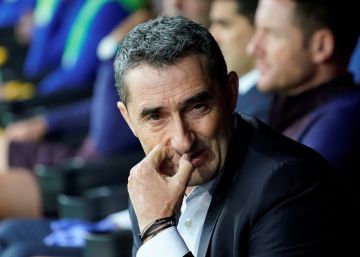 Ernesto Valverde and José Luis Mendilibar they are friends, although on the grass they have to stick to the script of their respective teams. Both agreed in the Sestao, under the orders of Jabo Irureta, and they understand each other well. Therefore, at the end of the Ipurua match, the Eibar coach claimed the figure, often questioned, of his Barcelona colleague: “You face a great team with a great coach. Do not doubt him at any time because Valverde is the best coach Barcelona can have, ”he said.

Mendilibar was not sorry, nor upset, nor angry at his players, but surrendered to the evidence. He took defeat with philosophy. “No one has been expelled, there has been no injury. Not bad, ”he said. “We have already seen immediately that it would be difficult. They were very motivated and went very well with the ball and have remained the same in the second half and we were more tired, ”completed the coach of the Eibar.

Valverde He also had the feeling that his team went out to the mentalized field that Eibar would not give anything away. "Any team knows what it means to come to Ipurua, so Eibar forces you, because of the pressure they put on you, and you also have to defend the avalanches of side centers," said Txingurri. “It is always important to win, especially after the break. They pressed us very high, so we knew that I was going to see space behind the backs of the plants, ”De Jong added.

“In a field where we suffer and we have done well,” Valverde insisted, while acknowledging that the firmness of Barcelona in defense, represented by Umtiti, had been key. “He has made a great game, it was a difficult test for any center. I've thought about it a lot because Todibo He did a very good previous match, but in this field a little experience was needed there, because of its ease for the side centers. ”

The Barcelona coach used the sneer to refer to the postponement of the classic against Real Madrid. “I hope we play that game before the end of the first round. It is fashionable not to agree on political issues. Let's see if, at least, we agree on sports matters. ” Lenglet, who signed in his statistics form the first assistance of his career – a great pass to Griezmann in the first goal of Barça – also referred to the postponement of the classic. "I speak for myself, not for another person," he started, when he was questioned about the opinion of the dressing room. “With the problems in Barcelona it is better to move the classic to another date. Freedom of expression is very good, but I don't like violence. I can't get wet because I live in Barcelona for a short time, ”the French central completed.

Barcelona improves properly, according to Valverde, and also from Mendilibar's vision: "What was not normal is for a team like this to start in the first days with two losses." He Barça added his fifth consecutive victory in LaLiga.

Real Madrid: Jovic Report: his wish, the offers that appear … and that call from Zidane

Roures: “I am talking to LaLiga so that the residences can watch the games”