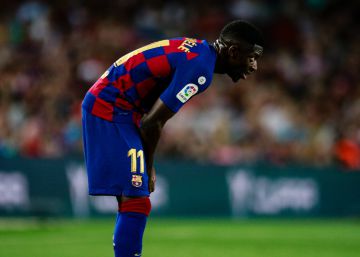 With the serious countenance and dressed in the Barça tracksuit, Ousmane Dembélé he was content to watch the game and the triumph against Getafe from the stands, again punished for the repeated fragility of his muscles. Nothing strange in a player who since he came to Barca has gone through rebound seven times and has lost 46 of the 126 team duels (36%). But very curious if it is appreciated that he is only 22 years old and that before arriving at Camp Nou he did not have any injury in the Rennes and only a ten-day drop in Dortmund due to some discomfort in the hip flexor.

They tell from the club that it cost Dembélé at the beginning to assimilate the price of his transfer to Barça -105 million fixed euros plus another 40 in variables- and the consequent pressure to perform at the height. It also indicates his well-known lack of professionalism, with variables such as unpunctuality, absenteeism and poor eating and sleeping habits, to the point that since the Barca he was called to order several times, from the locker room he was thrown in and from the sports area, after his last move-when he did not show up for medical tests after an injury due to a trip he had scheduled at the beginning of the course-, They gave him an ultimatum. "He has responded very well and is very motivated," they agree now from the entity, all with a very similar message. But that does not remove the penalty of Dembélé, again in the back room for another muscular problem. “I noticed some discomfort. I talked to him, he was calm, and it has been more as a precaution, ”Valverde said to justify his discard in the Getafe call. "He has a muscular overload in the hamstrings of the left thigh," he deciphered the medical area on Saturday without specifying the time to leave.

Upon arrival at the club, Dembélé began with a procession of injuries that with the passing of time resembles endless. It was in September 2017 in a clash before, precisely, the Getafe, when with a heel he noticed how his left femoral biceps broke. “It was a very aggressive gesture. It may happen, but perhaps a more veteran player would not have done it, ”he taught Valverde. But it was not for that the player, who had to go through Dr. Sakari Ostrava in Finland to undergo an operation and thus try to correct a break that kept him three and a half months in the dry dock. Intervention, in any case, it is not known if it was appropriate because of the seven injuries of Dembélé two were sprain and of the other five muscles, four fall on the left thigh. Like now.

And something happens with Dembélé because the discomfort seems perennial for a while. On his return, in front of Villarreal, he was a cyclone, the footballer who is claimed in the Camp Nou for his ability to imbalance. But he already put his hand on his thigh at the end of the duel. "I don't know anything," Valverde was surprised. Although a few days later, already in the previous one against Getafe, he noticed discomfort in the area and so warned the coaching staff. "He has not had good feelings and we have preferred to rest thinking about the next game," said Ion Aspiazu, assistant Valverde. It remains to be seen if he arrives for Wednesday's European duel before Inter. Among other things because as they say in the club: “We need the best version of Ousmane because he is a different player. Here you play to the touch and he is different because he can sit two on the same play. ” But for that, they have to respect the injuries and especially his left thigh.