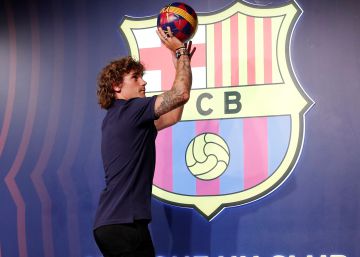 When the Barcelona Neymar hired, there were many voices that said it would squeak with Messi because there was always only one Barca 10. "Two roosters in a chicken coop will not fit", released Johan Cruyff as prophecy. It seemed an erroneous conjecture because the players marvelously married Luis Suarez to form a devastating trident, with Neymar and Messi by the sides and the Uruguayan with the hook to point. "People said we would not get along. The rest is history ", came to publish Neymar on social networks with a photograph with the Argentine.

But time gave reason back to Cruyff because after three seasons, the Brazilian decided to pack because he did not want to be the shadow of the best player in history but write his own with the ball between his boots.

He chose the PSG, where he has not been the philosopher's stone either, more pending to solve his string of judicial and nocturnal entanglements, even behind the effervescence of Mbappé. But appeased the ambition of Neymar to be the Golden Ball because he understood that with talent alone is not worth, Barça and the player, too Messi, they are dying to play together again. It is not known if that will happen, but that Leo will share at least this year the front with Griezmann, which is presupposed a difficult fit because it is known that Messi preferred before the return of Neymar and because they also await your site Dembélé and Luis Suárez , waiting to find an exit for Coutinho.

Questioned Messi about Griezmann at the time, the Argentine was quiet and laconic. "We will not give our opinion," he resolved. "If in the end we sign the two, surely no one seems wrong. Another thing is that you can sign the Brazilian because the PSG decides the price, "they say from the club, convinced that it is possible if the negotiations are opened. So now it's time to find a place for Griezmann. "He is a referential footballer who can play in any of the positions of attack and that will give competition because it is not a promise but a consecrated player", point from the sports area; "He can play on the inside, on the outside and he handles spaces well, and over the years he has improved his defensive version at Atlético."

The drawing of Argentina?

Although many coaches argue that the system is just a way to put players on the field and then depends on their movements and occupations, it seems obvious that Barca can not play with the usual 4-3-3 if you want to mix all the attackers or at least four of them.

A formula that seems to convince Messi is the 4-3-1-2, drawing that applied Scaloni with Argentina and that left Leo as a playmaker, the position he held in his origins. There it does not wear out on pressure or defensive exercise, but it requires everyone around him to run for two. A task that Luis Suárez does because he understands football from the effort but does not come naturally or effectively to Dembélé neither to Coutinho, nor to Malcom or Neymar himself at the time. Griezmann, more accustomed to physical waste because Simeone does not negotiate, could join a drawing that would have no extremes and would give prominence to long-distance sides and means like Busquets, De Jong and Rakitic.

Barca can also play with 4-2-3-1, sacrificing a means to recover the ends and give Messi again the hit. But counting Suárez is immovable in the center of the attack, several of the extremes -Coutinho, Malcom, Dembélé and Griezmann- should assume the rotations as the daily bread, as would happen if the 4-3-3 is maintained. If Neymar is added to the recipe, however, the noise would be superlative.

Barça, in any case, is looking for an exit for Coutinho because the player requested it and if Neymar arrives he will attend the clubs interested in Dembélé, even though President Bartomeu said that he is "now much better than Neymar". They are cabals to be done within a reality: Griezmann is from Barça, has cost 120 million and wants his place as well as Coutinho and Dembélé, the most expensive signings in the history of the club. The puzzle, still unsolved, is cracking.

"Antoine is very disappointed by the attitude of Atletico and its leaders, who act with an amazing bad faith and communicate the opposite of what they said in private," said Sevan Karian, Griezmann's lawyer L'Equipe. "That they do what they see fit, we will do the same if necessary."

Atletico insists on claiming the payment of 200 million, the value of the termination clause of the player's contract before the July 1 passed to 120, because "we have proof" that the agreement was formalized in March, before the amount will be lowered 80 million.

Griezmann arrived yesterday at Barcelona from Ibiza and will be presented today after yesterday he posed at the Camp Nou store.