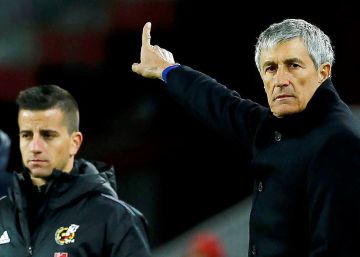 The hand of Setien It was noticed since the warm-up because Barça players changed customs that seemed immovable. Not only did everyone, holders and substitutes warm-up - the coach, sitting on the bench while they took the tone - but Ter Stegen worked out with two trainers and the final pass session was not in pairs but they were triangulations, like the goal that scored Messi after meeting with Griezmann and Arturo Vidal. Although Setién's hand was noticed especially with the ball in play.

Such was the Barca superiority that Barcelona made 1,005 passes, third time in LaLiga that has been achieved since 2005, as Barça signed 1,046 with Guardiola before Levante in 2011 and Tito Vilanova, two courses later, reached 1,035 also against the granota. The expressive data was that 921 of those passes were good for the 719 he had against Betis as a record in this course. “Of course I would like them to circulate faster. But it depends on the rival, on the difficulties that you put on and the spaces… It is about having control and not facilitating the cons. That is why I have asked for control, pause and avoid unexpected losses that do not allow you to be better placed for surveillance and that force you to run back, ”said Setién, and expanded:“ I put a remarkable. We have lacked a bit of success in the auction but the Pomegranate It has defended very well and with many people inside. We hope to improve, especially more fluency and success for the goal. ” Setién, however, was happy because Barça signed their highest possession record (82.6%) in a LaLiga match, only behind two figures at the time of Guardiola in 2011 (84% against Racing and 83 , 9% against Levante). "We have had absolute control of the game," Setién agreed.

Riqui Puig asks for a turn

"We have been a very solid team, they have created us little, we have had possession and we have combined well to get up," said Busquets. "We have had a lot of possession and the majority in the opposite field," he said. William love, responsible for the institutional relations of the first Barca team. Setién also recovered the defense of three in great phases of the match - Alba was screwed in rival field - and especially another sign of identity of the team such as advanced harassment. “Having a lot of people inside, when you lose the ball, it is better to run forward and press. They have come down physically and we have been able to steal enough balls ”, he resolved Busquets, reluctant to look back: “It's not about comparing it with Valverde. Each coach has his style and we will not reveal what Quique asks us now. ” Above the pressure was also positioned Riqui Puig, which seems to count for Setién and that caused the goal after sisar the ball in the opposite field. “Recovering the ball is not so much the physical but knowing how to position yourself to steal. We have been able to do it and we have scored a collective goal, ”said Puig, delighted to play -“ Quique has given me the opportunity and I appreciate it, ”he said— and according to the authority:“ I will do what they tell me. If I have to play in B, I will play in B. And if I'm still in the first team, I will continue working for the team. ”

On the young squad, who in 20 minutes gave more passes (39) than any player from Granada, also said Setién: “He has used his minutes very well. Maybe it tends to get a little messy, but from the factory it already brings a lot of concepts that need not be explained. ”

Busquets, with 157 passes (145 good), record of combinations of a player this League.

Riqui Puig He left in minute 71 and gave 39 passes, more than any rival in the game.