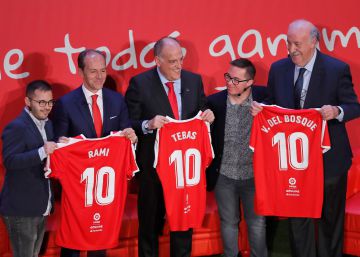 The First Division will put the brake on November 15 to 17 for the international break, but the ball will not stop running for most of its teams. At least, not for those of The Genuine League, the football competition for people with intellectual disabilities that begins its third season that weekend in Tarragona. The tournament, which was presented this Thursday in Madrid, brings together 36 clubs: 18 from the First Division (all except Real Madrid and Barcelona), 16 from Second and two from Second B and Third, after the incorporation of Betis, Cádiz, Elche, Getafe, Granada and Tenerife.

Under the motto "The League where we all win", the Professional Football League (LFP) launches a new campaign of this competition, whose flag is values ​​such as inclusion, respect and companionship. Values ​​that proudly embody its players, such as Álvaro Cano and Roberto Almazán, captains of the Nástic de Tarragona, host team of the first phase of LaLiga Genuine. Cano combines his sports career with his work as a teacher, while Almazán serves trays as a waiter in Port Aventura. The two have Down Syndrome and are the ambassadors of a tournament that will feature their own album of cards for the first time.

The tournament, which is divided into four phases with six days, rewards not only the final score, but also sportsmanship. In addition to the champion trophy, teams compete for a fair game award, with a scoring system parallel to the usual one in which the referees take into account the attitude of players and coaches on and off the field, as well as the behavior of hobbies The former coach of the Spanish team Vicente del Bosque, which has sponsored the presentation, has valued the "power of integration" that LaLiga Genuine has. "They play to have fun, share and socialize, while dramatizing the result," he said.

The matches of this league represent "really the values ​​of football", according to Javier Thebes, president of LaLiga and promoter of the tournament. "The games are not seen, they feel," insisted Tebas, who has valued the growth of the competition and the accession of new teams. "There are all the teams that have to be, because there are those who want," the president of the League has slipped. The players do not have a professional record or charge as their teammates in the First and Second Division, but they wear their boots with the same delivery and feeling in this league in which everyone wins.

LaLiga Genuine is made up of mixed teams with soccer players that certify more than 33% of intellectual disability. The modality is soccer eight, with seven field players and a goalkeeper and maximum of 16 players per call.

The matches are divided into four parts of 10 minutes, with an interval of two minutes between each part and five rest in the middle of the match. The teams add one point for each part won, to which three are added if they win the match, two if they tie it and one if they lose it.

The teams will face in four phases with six days. The first will be in Tarragona from November 15 to 17. The second, in Seville, with two days from January 31 to February 2 and from February 28 to March 1, with Sevilla and Betis as hosts. Las Palmas and Gijón will host the two days of the third stage from March 27 to 29 and April 24 to 26. Finally, the final will be in Bilbao, the sports city of Lezama, from May 29 to 31.

“You have to take a couple and keep believing”

Another nod from Fernando Alonso to Ferrari for Formula 1?

Valverde inspires the recovery of Froome