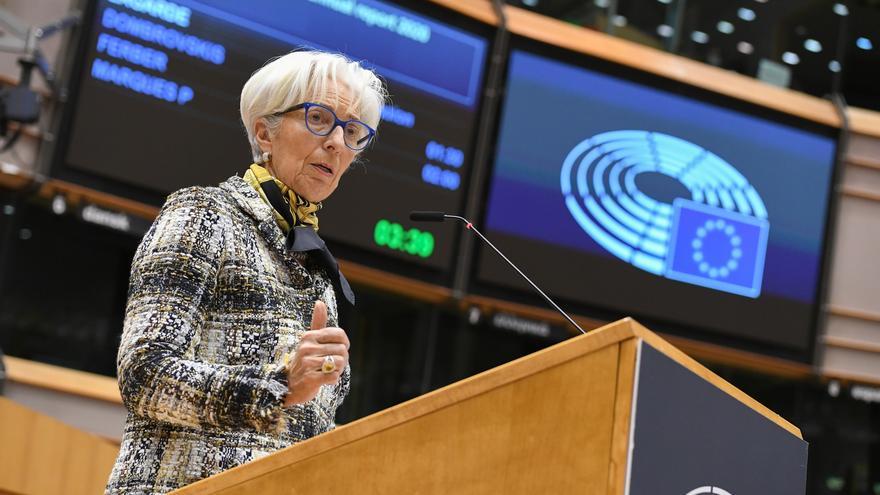 This is not the time to turn off the tap. This is what the president of the European Central Bank, Christine Lagarde, has stated in her appearance before the plenary session of the European Parliament, this Monday in Brussels. Lagarde, under whose mandate the ECB is mobilizing 1.85 trillion euros in purchases of assets and debt of the euro economies to reduce the pressure on risk premiums and the interest rates at which countries borrow. "More will be required," Lagarde said: "With another wave of the pandemic continuing to hit Europe and recovery is delayed, ambitious fiscal policy remains critical given the difficult economy. This will be essential to avoid the abyss effect and that no one is left behind. "

According to Lagarde, "the fiscal measures have to be specific, temporary in nature, also considering the medium-term sustainability of fiscal support: the longer it is maintained, the more important the orientation of the measures." The president of the ECB has also indicated that the recovery fund Next Generation EU "if applied correctly, it will support the fiscal recovery and it will constitute a fundamental ingredient in that strategy, but it has to be carried out without delay".

In this sense, Lagarde stated that "it is essential that Member States channel European funds towards necessary reforms and investments, including climate change and digitization. For the first time we have created a countercyclical budget and we can contribute to the economies of the European Union are stronger, reducing divergences in growth and income ".

Lagarde, as the economic vice president, Valdis Domvrobskis, has also recognized in the plenary session of the European Parliament, the EU must "reflect on a future reform of the Stability and Growth Pact".

The two fundamental axes of the Stability and Growth Pact are a debt ceiling of 60% of GDP and a deficit of 3% of GDP. And precisely in many countries because of the pandemic, the debt will go to triple digits and the deficit will exceed double digits. In this context, a hundred European economists and public and institutional officials are pressing for the ECB, which has 25% of the total debt of many euro countries, to cancel the growing debt due to the pandemic so that the money to be returned can be reinvested in debtor countries. The President of the European Parliament himself, David Sassoli, has said that the cancellation of the debt is "an interesting hypothesis of work".

While public debt has risen considerably to protect households and businesses, "citizens are discovering, some with dismay, that almost 25% of Europe's public debt is now in the hands of their central bank," these economists say. : "We owe 25% of our debt to ourselves, and if we pay it back, we will have to look elsewhere, either by borrowing again to refinance the debt instead of borrowing to invest, or by raising taxes or reducing taxes. expenses".

The cancellation of public debts or their transformation into perpetual debts without interest would be done in exchange for the commitment of the States to "invest the same amounts in ecological and social reconstruction." "These amounts now amount to about 2.5 billion euros for the whole of Europe," according to the text.

During the debate, the cancellation of the debt has been defended, among others, by Dimitrios Papadimoulis, leader of Syriza (La Izquierda / GUE / NGL) and vice president of the European Parliament, as well as by the M5S spokesman in the European Parliament, Fabio Castaldo . On the contrary, the vice president of Renew and spokesman for Ciudadanos, Luis Garicano, has charged against the idea: "It says, president of the ECB, that it is illegal. And it is true. But not only that. The cancellation would seriously damage the operation of the monetary policy, which would lose credibility as it would generate the perception that central banks are embarking on financing public deficits ".

The argument of illegality has also been used by the European Commission this Monday. "The cancellation of the debt by the ECB is prohibited by the Treaties, especially by Article 123 (of the Founding Treaty of the EU) that prohibits it," the spokesperson for Economy and Financial Affairs said at a press conference in Brussels , Marta Wieczorek.

The signatories of the manifesto in favor of the cancellation of the debt see the debate "positive and useful" in a context in which almost 25% of the European public debt is in the hands of the central bank, which in the Spanish case is amounts to more than 300,000 million euros.