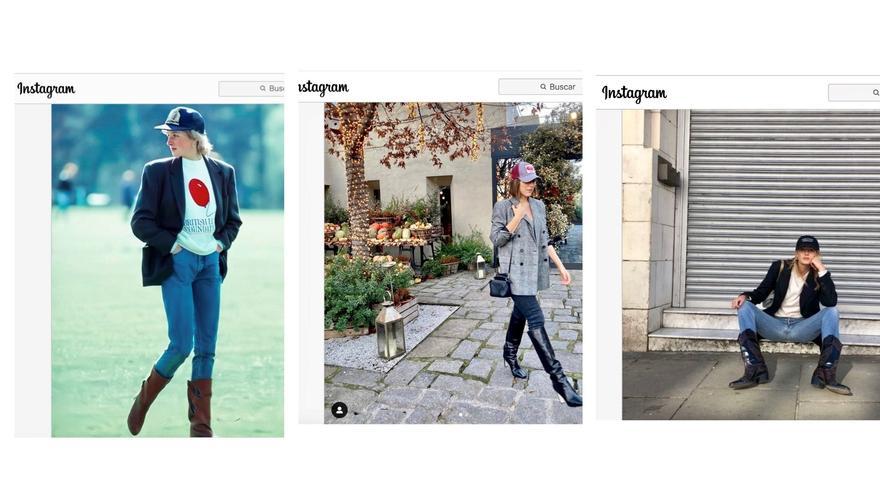 Madrid, Jan 14 (EFE) .- The styles of his public appearances were studied and, in most of the times, praised. So much so that, inadvertently, it became a fashion icon in the nineties. What Lady Di did not know is that, thirty years later, she would continue to dictate style rules to “influencers” who today replicate her “looks”.

Coincidences in the world of fashion rarely exist. That is why the fact that the streets and the famous take out of their wardrobes sets that resemble those worn by Diana Spencer in every small detail, shows that her reign of style, far from lasting 17 years, continues to prevail today. in day.

Beyond some emblematic outfits, such as the “revenge dress” signed by the Greek Christina Stambolian and that in black and with the shoulders in the air defied the codes of protocol, in addition to symbolizing the mourning of her marriage to Charles of Wales , informal styles are now the ones that take center stage.

Specifically, the one made up of a white British Lung Foundation patterned sweater, which Diana wore with an “oversize” blazer with shoulder pads, straight jeans, high-top boots and a navy blue cap at the polo club in May 1986 , wearing, without being aware, the “athleisure” style -sporty for the day to day- so fashionable today.

Tamara Falcó (@tamarfalco), the model Marta Ortiz (@martaortizp) or the “influencer” and fashion editor Camille Charriere (@camillecharriere) have replicated this casual style, which was also worn by the model Hailey Baldwin in an editorial from Vogue Paris magazine, under the stylistic direction of Virginie Benarroch, as well as inspiring various outfits from Celine’s spring-summer 2021 collection.

Another of the most imitated casual “looks” of the Princess of Wales is the one captured by the paparazzi while she was walking in the mid-nineties, showing that, although the label required styles related to protocol, outside of it she made jeans her star garment, as in this look consisting of a basic white t-shirt, light jeans and a long navy blue blazer.

The Princess of Wales knew that less is more, and that wearing this set with a dark belt and rolled up pants was an all-rounder and infallible style. For this reason, it is not surprising that the model Emily Ratajkowski (@emrata) cloned it almost exactly, by replacing the basic round neck with a high neck sweater.

The “influencer” María Valdés (@mariavaldes) and the style prescriber Chloé Helen Miles (@chloehelenmiles) have also signed up for this timeless flattering combo, halfway between classic and casual and, like many of the outfits that her Princess looked out of big events, successful for day to day.

Whether in large and sophisticated ceremonies, on the streets or even on the ski slopes and dressed to withstand the cold storms, Diana remains an icon, as some of her photographs skiing in Austria during the winter of 1994 prove.

As if it were a current style prescriber, Diana of Wales chose, from among all the possible types of snow coats, an XL down jacket in red with a high neck, and she did it almost twenty years before the fever for snows. “Puffer”, inspiring with this look the model Kendall Jenner (@kendalljenner) of the Kardashian clan and also the model Gigi Hadid, who opts for a version to the feet of this type of coat.

Beyond the garments themselves, the way they are worn is also important, and Lady Di’s characteristic way of casually knotting the sweaters on her shoulders also established a chair of style. Sofía Coelho (@sofiamcoelho) and Alba Hervás (@hralba) do it in a millimetrically identical way.

And it is that the sweaters were one of the most iconic pieces of the princess, and proof of the influence that continues to have today is the red sweater with sheep print that she wore in 1980 and that has been reissued by Rowing Blazers. A sweater that Zara also launched a “low cost” version varying some details and that, in a matter of days, hung the sold out label.

That Diana Spencer was ahead of her style is today more than ever a latent reality, which based on the photographic legacy of her “looks” and the recent eighth season of “The Crown”, she approaches fashion prescribers of the moment to immortalize an undying stylistic reign.