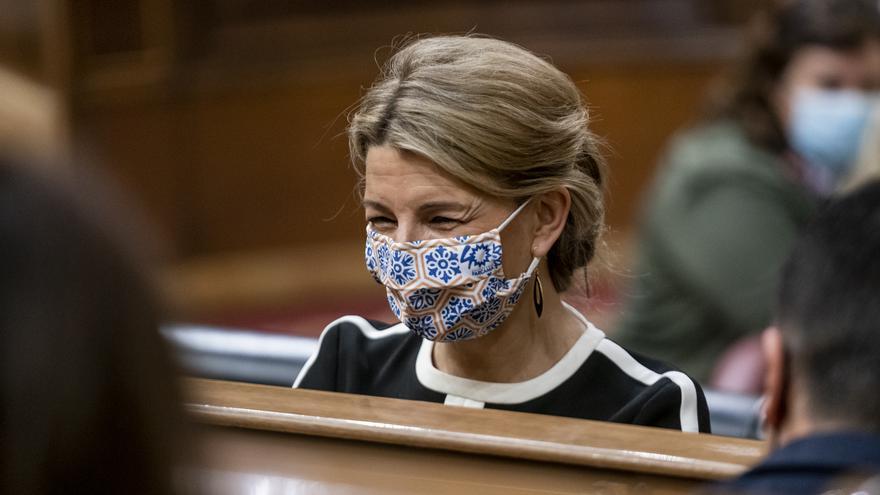 The time has come: the Ministry of Labor plans to bring the ILO Convention 189 on domestic workers to the next Council of Ministers. On Tuesday, April 5, the Government is expected to propose Spain's ratification of this international agreement that requires equal working conditions for domestic workers to those of other workers on several key issues such as the right to unemployment, a historic claim of the group of workers and that has just received the backing of European justice.

"If all goes well, in the next Council of Ministers, Spain will send the ratification of ILO Convention 189 to the Cortes Generales, fulfilling one of the great demands in our country", said the Second Vice President and Minister of Labour, Yolanda Díaz, in a meeting with the media in Brazil. Sources from the Ministry of Labor confirm that the idea, unless unforeseen, is that the first formal step for ratification be taken next Tuesday.

Convention 189 of the International Labor Organization dates from 2011 and includes a whole series of labor and social protection rights that the signatory countries have to guarantee for domestic work, carried out mostly by women and that "continues to be undervalued and invisible" , What remember its preamble.

Ratify this international regulation requires taking measures to "eliminate discrimination in employment and occupation" and that "domestic workers enjoy conditions no less favorable than the conditions applicable to workers in general with respect to the protection of safety society”, among others.

These two issues mentioned are highly relevant due to the practical repercussions they may have for domestic workers in Spain. They clearly imply the recognition of the collective's right to strike, from which they are excluded today and that the Court of Justice of the EU has considered that it involves indirect discrimination based on sex.

But, in addition, this obligation to end discrimination against the collective "in terms of employment and occupation" can affect other historical claims of domestic workers. Like the disappearance of a formula for dismissal without cause (withdrawal), which also has a cheaper dismissal compensation than the rest; the lack of access to Fogasa to protect workers in case of non-payment of wages and compensation; and the Social Security contribution for their effective wages, among others.

To the Cortes and waiting for the regulation of unemployment

Yolanda Díaz warned during her visit to Brazil that agreement 189 affects "the most vulnerable female workers" and stressed that "for more than ten years nothing had been advanced in that agreement", since it dates from 2011. Once approved by the Council of Ministers, it is sent to Congress, which is the one that must support the ratification. When the Courts give the green light, the Executive will communicate to the ILO the adherence to the agreement.

"Finally, I think that in a fairly quick time it will see the light, therefore, a lot of satisfaction", pointed out the minister, with the reminder that the Government's plans were "interrupted by the pandemic" at the beginning of the mandate , in 2020. The coalition agreement between PSOE and United We Can included the ratification of Convention 189 and the culmination "as a priority" of the full integration into the General Social Security Scheme of domestic workers throughout the legislature “.

The passage of the ratification of Convention 189 has finally reached the middle of the coalition's mandate, which for groups of domestic workers has meant "too much time". Díaz has argued that the proposal to ratify the agreement “has two parts”, one from the Ministry of Labor and the other from Foreign Affairs, as well as “a lot of bureaucratic procedures”. One of the last, the endorsement of the Council of State, "has already been completed", so the Ministry plans to take the regulations to the Council of Ministers on April 5.

Beyond the ratification of the agreement, now the biggest challenge is the regulation of the right to unemployment, which Work has been announced for this 2022. The Minister of Labor has advanced that it will also end with “other discriminations”, among which he mentioned the dismissal. The CCOO union has demanded this week that Labor and Social Security urgently open a social dialogue table to address these issues. Groups of domestic workers mobilized last Sunday and on Tuesday this week, International Domestic Work Day, to demand the immediate legislation of these rights.