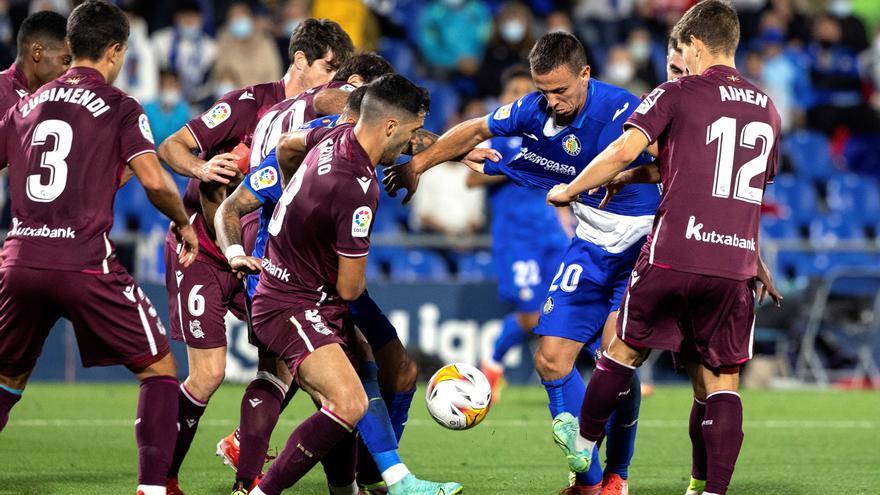 The Real society touched the sky of the leadership of the First Division after drawing 1-1 at the Alfonso Pérez Coliseum against Getafe, who could not add his first victory of the course to place Míchel in a controversial situation with your position at stake.

To the Getafe He could not play a worse rival to clarify the future of his coach. Míchel, touched after seven consecutive defeats, was gambling for the position against a team that could be a leader with a victory at the Alfonso Pérez Coliseum. The Real Sociedad, who had not lost from the first day, was going to be the judge of the Madrid coach.

Míchel was hoping to find a group of tired players after the game that Real drew against Monaco in the Europa League. To refresh, Imanol Alguacil made four changes and Gorosabel, Le Normand, Navarro and Lobete came out to play for Zaldua, Zubeldia, Januzaj and Guevara. Isak, recovered from an injury, had to wait on the bench.

While, Getafe received Mauro Arambarri with open arms. The absences of the Uruguayan midfielder in the last three days greatly reduced his team, which needed to eat their balance. With him on the green and with Aleñá’s return after serving a penalty game, Getafe once again showed a more solid version.

However, it seemed insufficient to face the Royal Society, which during the first part the victory of the initiative was scored. With Mikel Merino, Oyarzabal, Navarro and Zubimendi, they had more construction than Getafe, with a much more destructive DNA in their midst. Florentino, Maksimovic and Arambarri are good brooms, but they did not match the creative capacity of the men of the San Sebastian team.

Even so, Getafe went ahead on the scoreboard at halftime after a first act with very few chances. Just one clear for each team. The azulón team took advantage of it and Real society, no. Sandro, on the edge of the break, made the difference after taking advantage of an assist from Arambarri, who stole a ball from Elustondo in midfield to enable his teammate in a heads-up against Remiro.

That was the difference from a clash that was even. Sandro did not miss and Lobete did, before Soria sent the ball near the left post of the goal defended by the Getafe goalkeeper. By centimeters he did not score and Míchel and his players left alive to the locker room.

Well crouched in their field of play and with the lines very close together, Getafe withstood the attempts of Alguacil’s men well. However, he made the mistake of advancing lines and going out to pressure after the restart. La Real came to absolutely control the clash and with three passes was able to stand in the last third of the Getafe pitch.

For many minutes, he cornered his rival until he achieved his objective. He warned with an occasion of Mikel merino that Soria destroyed, but did not forgive in another of Oyarzabal. The Spanish international scored his sixth goal of the course after heading a Zubimendi cross from the right wing. There was half an hour left and Getafe seemed like a real ordeal was going to await.

Nevertheless, the changes slowed the pace of the game. Isak, Ünal, Jonathan Silva and Barrenetxea took to the grass and the crash turned into a back-and-forth duel in which anything could happen.

In the end, the marker did not moveor. Within the madness, the occasions did not reign and perhaps no one was happy. La Real, because they missed a great opportunity to become the new leader of the First Division. Getafe, because they still haven’t won and they have gone eight games. Míchel is nearing impeachment hell, although he may not be close enough yet.

Incidents: match corresponding to the eighth day of LaLiga Santander played at the Coliseum Alfonso Pérez in Getafe before 8,463 spectators.