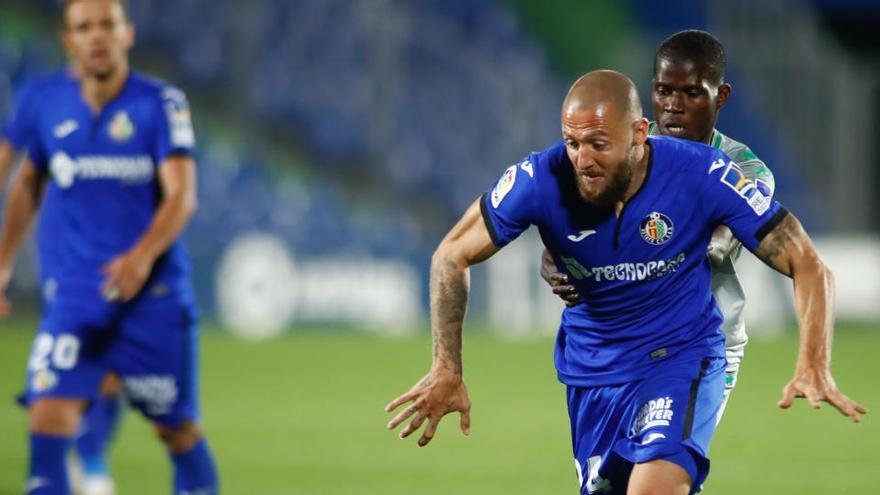 He Getafe, Leader of LaLiga Santander, seeks this Saturday to remain undefeated and endorse his privileged position in Anoeta, in a fifth day in which Valencia wants to continue growing against a Real Betis headdress, in which Real Valladolid and Eibar face off for their first win of the course, and the Elche and Huesca faces are seen in a duel of newly promoted.

Those of José Bordalás have added seven out of nine possible points at the start of the championship, and they are, together with FC Barcelona, ​​the only team that has not yet fitted in in the games played: 1-0 against Osasuna, 0-0 against Deportivo Alavés and 3-0 against Betis.

Now, they will look for this Saturday (6.30 pm), with all the available squad, their first victory away from the Coliseum and on a stage where they already did last season (1-2). Given the lack of reinforcements, not many changes are expected in their eleven except upstairs where Ángel, Mata, ‘Cucho’ Hernández and Enes Unal are fighting for two places.

He Getafe will face a Real Sociedad which is currently choking to play in its stadium, where he has not yet managed to win after the draw against Real Madrid (0-0) and the defeat last Tuesday against the Valencia (0-1), although to his credit is the away win at Martínez Valero.

Those of Imanol Alguacil will try to reverse their situation, although they continue with a full infirmary that Januzaj joined, injured on Tuesday. Portu will take his place in an eleven where Guevara could relieve Zubimendi at the pivot and where Willian José aspires to lead the attack alongside an Oyarzabal who has completed 200 games as ‘txuri-urdin’.

Meanwhile, the executioner of the ‘txuri-urdin’ during the week, Valencia, hopes to give momentum in Mestalla (9:00 p.m.) to that victory with another against Real Betis, which drags two consecutive defeats that have tarnished its good start.

Despite the lack of signings, Javi Gracia’s team is currently second in the table with the same seven points as Getafe, although with one more game, and now he hopes to forget the setback at home against him Huesca with a victory that seats him above.

After its good debut in the derby against Levante (4-2), the ‘che’ team linked two days without winning until it took off again in Anoeta, and now it wants to endorse it in a match where it will continue without Mangala, Gabriel Paulista and Denis Cheryshev , but the Navarrese coach recovers Carlos Soler. Wass could repeat in midfield with Kondogbia and Guedes regain their position in the eleven.

Manuel Pellegrini, meanwhile, you need leave behind the painful defeat against Real Madrid (2-3) and, above all, the bulky thrashing suffered against Getafe (3-0) to resume the good path with which they started the course, with two consecutive wins and good defensive performance.

For this, the Chilean coach will have to deal with the absences of Aissa Mandi, due to sanction, and the still injured Claudio Bravo, although he recovers Emerson, sanctioned in Getafe. Víctor Ruiz would be the substitute in the rear of the Algerian, while Joaquín would return to the title and Loren, Iglesias and Sanabria fight to be the ‘9’.

Emergencies in Pucela and Martínez Valero

For its part, Real Valladolid and SD Eibar They meet at the José Zorrilla (1:00 pm) in search of their first win of the season so that their situation does not begin to be pressing, despite how little they have taken this season.

Those of Sergio González, who were prevented by a goal from Vinicius this Wednesday from rescuing something positive in Valdebebas, have taken the two points that they treasure in Pucela, and they hope to catch on in a crash that will be lost again El Hacen, Kiko Olivas, Rubén Alcaraz, Javi Moyano and Joaquín Fernández.

Meanwhile, the gunsmith team has only managed to add in its debut in Ipurua against RC Celta (1-1), and later it has linked defeats against Villarreal (2-1), Athletic Club (1-2) and Elche (0-1 ). For the appointment, José Luis Mendilibar has more problems with casualties after the injuries of Bigas and Recio last Wednesday, and that join the already known casualties of Sergi Enrich and José Ángel.

Finally, in the ascended duel at the Martínez Valero (6.30 pm), Elche will try to continue their victory against Eibar, first in this League, against Huesca, who still does not know what it is to win this season, but who has been able to draw against Atlético, Villarreal and Valencia.

After the 0-3 of the premiere against the Real society, the franjiverdes reacted during the week, and now they will fight to win for the second consecutive day in a clash in which Jorge Almirón will not be able to count on Cifu.

The Huesca, who already lost in El Alcoraz to the other recently promoted, Cádiz, have problems on the right side due to the losses of Pablo Maffeo and Pedro López, so it seems that a left-handed man like Galán will play to try to get out of the part He falls off the table in a direct duel that last year ended with a draw at the Martínez Valero (1-1).

Barcelona and Seville will settle this Sunday the last game of the fifth day of The league Santander, the stellar clash of the weekend that will put the finishing touch to an intense week in which both teams pursue the plenary session to add their third consecutive victory.

The Barça team and the Sevilla player are the only ones in the competition that count their games played for victories. They have won both of their commitments, albeit in different ways. Ronald Koeman’s block features a revitalized face, dynamic, solvent, with stellar Ansu Fati, Philippe Coutinho reborn and Leo Messi “plugged in”, as Sergi Roberto assured; and that of Julen Lopetegui has had many more troubles and has needed to wait for the last bars of their meetings to move them forward.

However, this Seville is a competitive ‘animal’ that after his brilliant last season he is trying to continue growing and an endorsement would be to end his losing streak at the Camp Nou, where he has not won in the league since December 15, 2002 and in the Cup for ten years.

The other great clash of this fifth day is the one that will face in the Metropolitan Wanda Atlético de Madrid and VillarrealOne stopped in Huesca after his dazzling start to the season and the other was reborn with his victory against Alavés.

Maybe we will have to wait until the last minute to see if Diego Pablo Simeone chooses to return the title in attack to Diego Costa or keeps the Uruguayan Luis Suarez, to act as a spearhead against Unai Emery’s ambitious team, one of those who has strengthened more and better for this course but is having a hesitant start, although Gerard Moreno and Paco Alcácer have started the season very successful and They are already in the leading group of the artillery classification with three targets, so they pose a threat to the Madrid defensive network.

Far from the sensations that the Barcelona, Real Madrid, goes between poor performances and notable troubles to get the games going. They remain undefeated and in the leading group with seven points, but Zinedine Zidane’s team is forced to improve if they want to have options to revalidate the title.

He will visit the La Cerámica de Villarreal stadium I raised -the Ciutat de Valencia is in the remodeling phase-, a team very well armed by Paco López who usually comes out responsive. In fact, last season he beat him 1-0 with a great goal from José Luis Morales, and the ‘commander’ has started this full campaign.

Mendizorroza will host a new Basque duel against Athletic, a meeting in which both need to wake up, especially Pablo Machín’s team, bottom with Eibar with just one point, although Gaizka Garitano’s men will try to forget the stumble against the heroic Cádiz, who won for the first time in their history in the league in San Mamés and now he will receive, without Carlos Akapo and Álvaro Negredo -sanctioned- the euphoric, although physically worn out, ‘euroGranada’ in an Andalusian rivalry match.

Program of the 5th day:

Plante of cyclists: stage 19 of the Giro d’Italia stops

Pelé, 80 years of the king who conquered the football Olympus