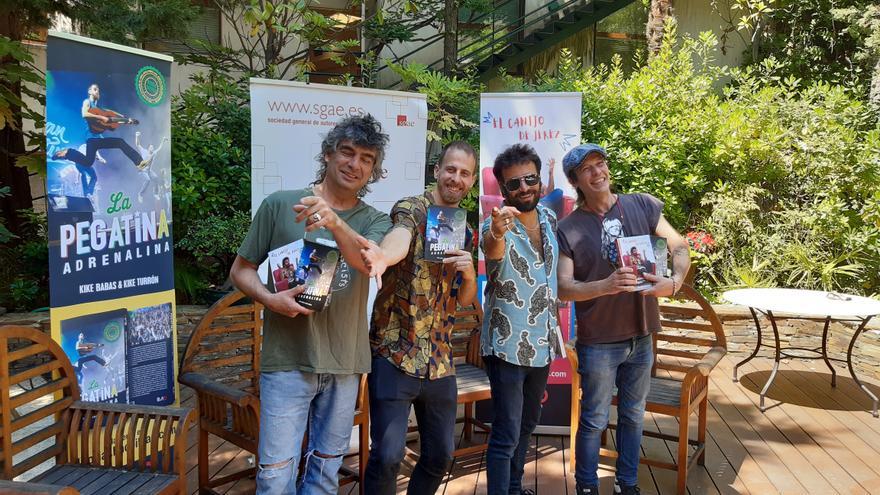 Madrid, Jun 8 (EFE) .- Among many laughs and musical starts, La Pegatina and El Canijo de Jerez have presented this Tuesday the biographies of their groups, written by Kike Turrón and Kike Babas, known as "Los Kikes", who have wanted to forget what is already known and let "them speak."

"We decided to throw the shuffleboard at some figures who are in a very sweet moment of their careers, among which are La Pegatina and El Canijo de Jerez", explained one of the writers, Kike Turrón, specifying that his idea is to create a collection of music books by different artists.

Two books - "Adrenalida", the biography of La Pegatina, and "Garrapatero cosmico", of Canijo - in question-answer format, which collect the life, work and dozens of anecdotes of the authors and colleagues.

"We wanted to go beyond the interviews and the material available on the internet, let them speak," said the other writer, Kike Babas, at the press conference held this Tuesday at the Palacio de Longoria, headquarters of the SGAE.

In a presentation where there was no lack of laughter, they have explained, among other things, how shy they were before starting their musical careers.

"I was cut off until I met my friend Miguel thanks to a Triana sweatshirt that he was wearing," said Marcos del Ojo, known as El Canijo de Jerez, while Rubén Sierra recalled that he looked in the mirror, which means accepting himself to oneself.

They have also recalled experiences such as why a television camera recorded all the singers at a concert except Sierra - his hands were full of blood from playing without a pick - or how the members of Marcos del Ojo's band threw food at some participants. of Operación Triunfo.

"Adrenalina", which is a title that "fits the bill" for the Catalan band, according to one of the Kikes, includes a biographical conversation with the founder of the group, Rubén Sierra, to which are added the experiential contributions of his eight companions . The singer has indicated that this has been able to get ahead because they have had time, "one of the positive parts of the pandemic."

Del Ojo offers in "Garrapatero Cósmico" a sincere and complicit dialogue in which he covers his successful career, first with Los Delinqüentes and later alone, landing on projects that he has starred in with other colleagues. "We were bad students, but we had an innate art of getting songs out," he said.

The biography is completed with the prologues of colleagues such as Diego Pozo el Ratón, Tomasito, Muchachito, Juanito Makandé and Capitán Cobarde.

Although at first the stories of two different groups may seem, "they are parallel races in some sense, representing two different types of autochthonous and peninsular miscegenation: that of Barcelona and Andalusian rock", added Babas, who together with Turrón have already written biographies of authors like Manu Chao or Rosendo. "If they are not yet classics, they will be," he stressed.

The presentation ended with guitar in the hand of each of the singers interpreting some of their best-known songs, such as "Hello, good morning" by El Canijo de Jerez or "Y se fue" by La Pegatina, to which in the last of the three songs "the Kikes" have joined.

"Rubén and I have fulfilled our dream: to sing and make people laugh around us," said 'el Canijo'. And it is that from time to time they have played live, but today may just be a "preview."

The books, produced since the beginning of the pandemic between face-to-face meetings and dozens of audio messages and which include numerous photographs, can only be purchased for the moment on the web pages of La Pegatina, El Canijo de Jerez and the editorial BAO Bilbao.