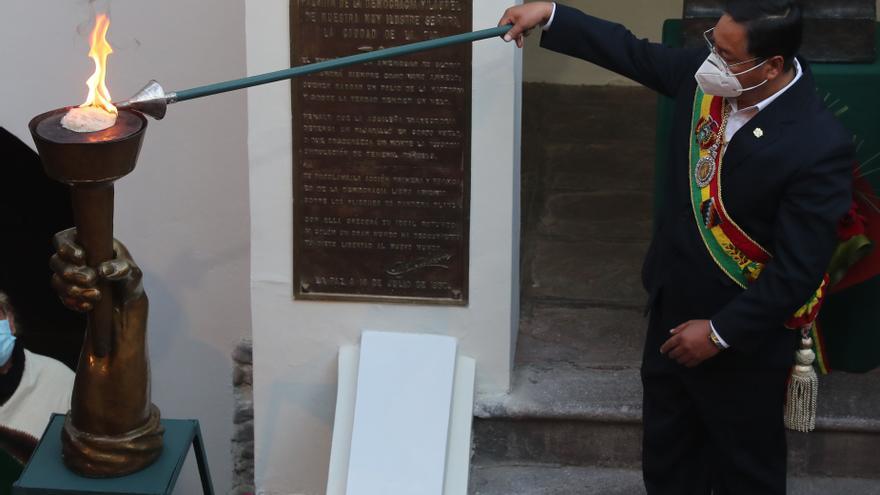 La Paz, Jul 15 (EFE) .- The Bolivian city of La Paz celebrated this Thursday the commemorative acts of the July 16 Revolution, a nineteenth-century uprising against Spanish colonization, amid forecasts by the pandemic that limit the usual celebrations.

The central act that consisted in the lighting of the torch that symbolizes freedom and a memorable libertarian proclamation was held in the old house of the hero Pedro Domingo Murillo, in the center of the city, at the head of the country's president, Luis Arce, and the mayor of La Paz, Iván Árias.

Arce was in charge of lighting the torch that symbolized the libertarian dream of a group of rebels who rose up against Spain in 1809, while the mayor read the libertarian text before a small audience made up of state officials.

Arce highlighted that the libertarian cry of July 16, 212 years ago, one of the first in the continent, "over time" also made visible other milestones such as the preceding indigenous uprisings that were also decisive in "promoting the feat of patriots." .

The president highlighted the hope of the population that "little by little" it will return "to normality" that was left behind by the pandemic and urged the unity of actions with the government and the municipality, led by opposition sectors, to give "hope and certainty" in matters of health and economy.

The act concluded without the traditional parade of torches that, before the pandemic, was characterized by a long route that crossed the center of the city in which national and local authorities participated as well as public officials who carried torches as a symbol of freedom.

The Bolivian president finally attended the event organized by the Mayor's Office even though he had not confirmed his presence at the invitation that had been made to him a few days ago.

For the rest, Arce and Arias followed different routes towards differentiated works delivery events, such as the inauguration by the Mayor's Office of a distribution complex near the Hernando Siles stadium and a large cultural park in the north of the city built by the Government.

The great Verbena Paceña, an act of public concerts in an open space, was changed by a virtual celebration as a measure to prevent contagion by covid-19 and the third peak that a couple of weeks ago has fallen in the country.

The Mayor's Office also announced a synchronized parade of drones, manned by people who use these devices as a working instrument, as one of the main activities of the libertarian anniversary.

The celebrations in La Paz stumble, for the second year in a row, with the effects of the pandemic, although this time with a little more breadth than in the previous year when a rigid quarantine was in force.