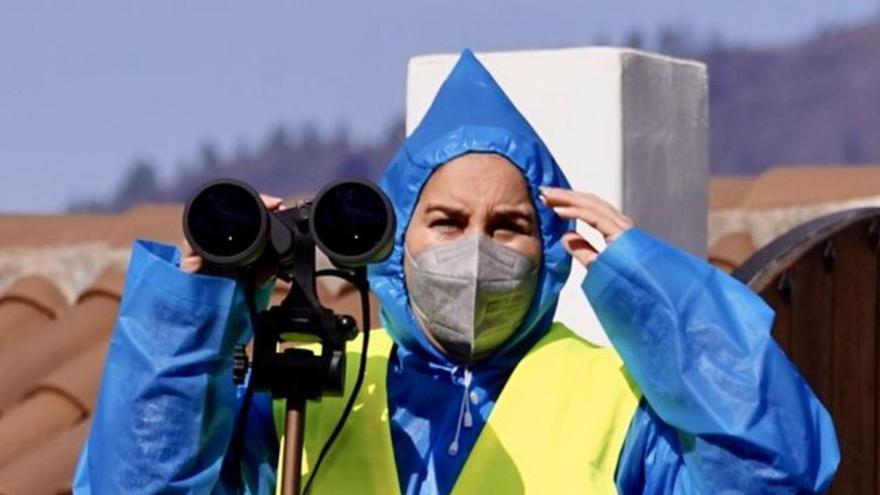 María X has just broken the elastic of her anti-ash glasses, and that the glasses do not take an hour of filming. “They are from the Chinese,” he clarifies. María X does not want to give her name because she should not be there for reasons that are hidden from her alone, in the square of Tajuya, where the roar of the volcano, yesterday Sunday especially perretoso, is mixed with the call of the priest via loudspeaker for the beginning of some religious function. X is shocked by the phenomenon, of which she had her first visual shortly after passing the time tunnel, the one that connects, despite the traffic restrictions of the weekend, the placid east with the magmatic west.

Top-of-the-range protection on the streets of Tajuya. | | LP / DLP

Like her, another 25,000 peopleAccording to the count based on the sea and air squares, they have come to the beautiful island to pass the most volcanic bridge of their lives. Many of these 48-hour tourists, or even going back and forth between morning and night, are perfectly identifiable with respect to the local population, already more than trained to live with the sulfur in the atmosphere.

But not the foreigner. And he faces a whole protocol of which he does not know its details. Hence, a good number of them arrive with a complete kit of accessories and complements that, in the most extreme cases, would allow them to survive a hypothetical Krakatoa blowout.

This is the specific case of a family of peninsulars, residents of Tenerife, who arrive for the second time on the slopes of Cumbre Vieja with repellent raincoats and hood tied in the throat, Yellow 112 overcoat reflective vests, FP2 mask, tripod and very high-end binoculars.

All have arrived from Friday, with continuity yesterday Saturday, in a tide attracted by the volcano that has allowed the service sector an entry of fresh air, with 85 percent of the accommodation places occupied in the east and north of La Palma thanks to the deployment of an authentic airlift in which only Binter has reinforced with 32 extra flights that cover the lines between La Palma island with Gran Canaria and with Tenerife North, to which Fred Olsen joined with two other more daily routes between Los Cristianos and the capital.

A visit to the establishments in the west, especially in the only beach that remains to the Valley, that of Tazacorte, allowed to appreciate the substantial wiggling in some terraces that during the whole week remain in a state of hibernation, and that from noon of the Friday they looked in all their glory. But still, not as much as in the east and the island’s capital, where after stopping to get closer to Cumbre Vieja for a few hours, it receives the bulk of this new volcanic tourism that comes to alleviate the misery that has occurred in La Palma since last September 19.

It is a tourism that, paraphernalia aside, arrives in a state of recollection, overwhelmed between the visual spectacle and the dimensions of the catastrophe and either in the strategic Plaza de Tajuya or at the tip of the Tazacorte dock, from the new strips can be observed, A respectful silence tends to reign, further underlining the giant’s shocking roar.