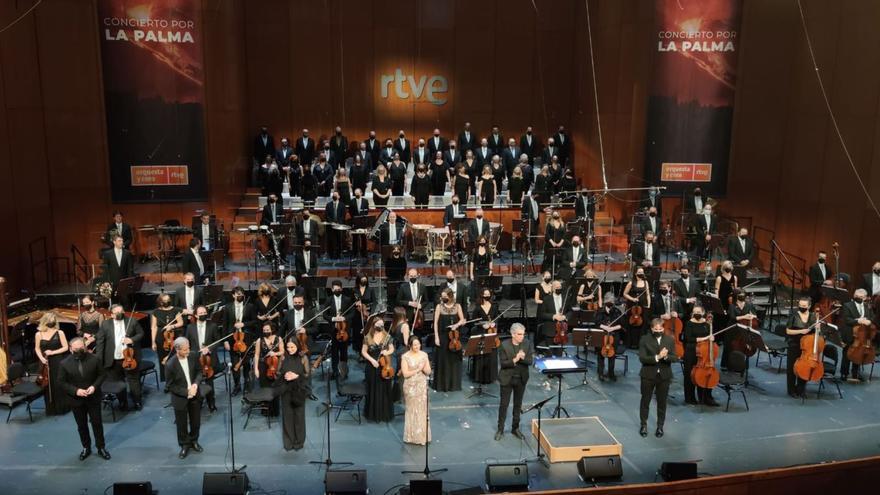 At number 65 Atocha street is located the Monumental Theater, designed by the architect Teodoro Anasagasti in 1923, although today its exterior is not at all reminiscent of the original image. It began its journey by calling itself Monumental Cinema and it was the first construction project of Madrid’s rationalism in which reinforced concrete was used; and there he founded the Communist Party of Spain, on June 2, 1935, which would become the Popular Front. After the civil war, its main activity was filmmaking, although from the 70s of last century and for two decades on its stage, great musical milestones passed in Spain such as Hair wave Avoid scored by Paloma San Basilio when we have the information. After a few years of decline, in 1988 it became the official headquarters of the Orchestra and Choir of Radio Televisión Española.

Two months ago I received a call from your managing director, with whom we had already had some contact in the past. Knowing about symphonic productions about popular songs from the Canary Islands that we had devised in the past, and taking advantage of the fact that the Orchestra had a free week in its calendar, the possibility arose of putting together part of that material a benefit concert for La Palma ravaged by the volcano. Despite the little time we had to carry out all the preparations, we gladly offered to help him and the result has been a concert that I believe is extraordinary, not only for the emotionality of his cause but also for the artistic results of the same. Here we tell it as a small chronicle.

‘Symphony of a volcano’

The program was opened with the Second Movement of the Symphony of a Volcano, written more than two decades ago by the composer, unfortunately now deceased, Enrique Guimerá. This Movement of his symphony – with an imaginative instrumental color palette and a neo-romantic melodic concept – was successfully proposed as a prelude by Ignacio García Vidal, who served as musical director. And there it was already beginning to discover, for those of us who had not seen him direct, the leadership capacity of this Alicante-born Master living in the Canary Islands. His perfect knowledge of each particularity written in the scores, the management of the tempos, both in dynamics and power, and the color and character of the sound that he gets from the orchestral mass make a sum of talents that make him a conductor ideal musical, also for non-habitual repertoires in the symphonic programs to use.

The nationalist echo offered by Guimerá’s pages, regarding his references to Tenerife’s tajaraste as the main leitmotif, led us to conclude that we were dealing with a contemporary version, in the best sense, of the Canarian songs by Power. She was succeeded by Songs of Lima, a recreation that we composed ten years ago evoking Portuguese and Canarian melodies and that that night sounded subtle under a delicate symphonic arrangement for strings by Peter Hope. It was performed, in an emotional duet, by the Palmer singers Luis Morera and Yumara Luis.

Then came the Isa Canaria that Elfidio alonso recreate, with his talented nose, on the melody of Teobaldo Power in their popular Chants. Yumara sang the song to her native island with the outburst of tradition and it was followed by the response of the titular choir that, despite being diminished in number by sanitary regulations, proved to be brave and accurate in coloratura and vocal weight. The applause of the respectable at the effective closing of Alonso’s piece, and highlighted here with an orchestral tutti that closes the fortunate arrangement of the Madrid-born Juan José Solana, was the second closed compliment of the night.

Songs of Molina and Guerra

This was followed by one of the most beautiful songs in the repertoire of the Tenerife singer-songwriter Andres Molina, Where i was born, interpreted to duet by Olga Cerpa and Yumara. Olga’s deep mezzo register texture naturally blended with the lightest of the young palm-tree singer. Both voices were led by the hand by the Master García Vidal through a fine arrangement by Maestro Alejandro Monroy. The prestigious singer-songwriter Pedro Guerra he masterfully interpreted his song Seven gates, a heartfelt and beautiful emotional X-ray -with verses of forceful literary quality- of his memories about the islands that saw him born. The symphonic arrangement of Catalan Joan Albert Amargós for this song, he proposes a sound craft where the harmonic variants developed between the instrumental families of the orchestra are superimposed on the melody and, together with the participation of the choir, it emphasizes its modern resonances.

Olga and Luis Morera They returned to the stage of the Monumental to amaze again with that musical and personal complicity that unites them from time to time to the joy of the public who is lucky enough to listen to them. They did it first with Point, a free recreation by Morera of this Cuban air linked to the Canarian tradition, and especially to La Palma tree through the historical emigration to Cuba. Then the interpretation of The Night of Arguineguín, one of the essential musical pages of the songbook of Nestor Alamo. The vocal adornments – tremolos and falsettos, expressive … – with which both build this unique version, is unparalleled. The beautiful symphonic arrangement that accompanied them, signed by the experienced composer, helped a lot. Juan Jose Solana, who was a student and professional accomplice of Maestro García Abril, proposing opportune silences in the orchestral instrumentation where the singers cavort vocally to solve the rhythm game between the habanera and the isa.

The program returned again to the Caribbean in the voice of Olga Cerpa thanks to the explosive symphonic version that Jesus gluck wrote for him Tata Mayarí from Poplar. Whatever Olga addresses, she does so from the passion of a voice and an unrepeatable artistic personality, full of nuances and velvety vocal textures, with an elegance – in the voice, in the scenic gestures and in the wardrobe – that is already a mark of his successful career and that ends up pushing the ear and the eyes of the beholder towards excellence.

‘A la Caldera’ by Luis Morera

The legendary closed the concert To the Caldera, sung by its author. Seventy five years and on Mulberry modulating sonic fantasies in a vocal register that jumps from one octave to another unceremoniously, peering over the precipice of his vocal tricks without fear, making his eternal voice fly over the memory of the Canary Islands; La Palma definitely became a song at the Monumental, with its audience emotionally overwhelmed by the final melody of the choir that, with musical complacency, was conducted by Maestro García Vidal.

The double encore was demanded by the spectators, standing up, who filled the Theater. They all sang to Valentina hernandez in an epic and metalic symphonic arrangement performed by German Arias about the song that we wrote years ago to pay tribute to the singer from Herrera. That night the Orchestra and choirs of the Public Radio and television of Spain made a very deserved account of its vocation of service to the society that supports it, especially to a small part of it that has been buried by the lava of a volcano. The spirit of that beautiful evening will be accompanied by a box office collection that adds to the many initiatives that have been organized to help the necessary reconstruction of an island paradise called La Palma.