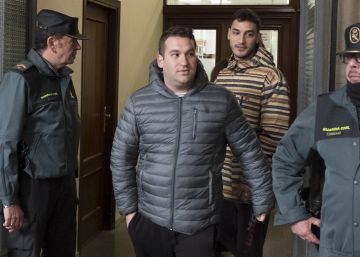 Alfonso Jesús Cabezuelo, Jesús Escudero, Antonio Manuel Guerrero and José Ángel Prenda, four of the five members of La Manada, who are currently serving a penalty of 15 years in jail for raping a young woman in the Sanfermines of 2016, they will sit on the bench again for an alleged crime of sexual abuse committed against another 21-year-old girl, in Pozoblanco, two months before they perpetrated the sexual assault in Pamplona. The Prosecutor's Office asks for three years in prison for the type of sexual abuse, four more years for a crime against intimacy. For Cabezuelo, the military of the group, also requests a fine for a slight crime of injury for having hit the victim after refusing to practice fellatio. The validity as evidence of the video, the qualification of the facts or the possibility that the young woman was drugged by the accused are three of the main issues that will be resolved during the oral hearing that begins on Monday and for which there are accredited 26 means of communication.

The facts by which they are judged occurred in the early hours of May 1, 2016, when the Cordovan got into the car of the four young people, after having met them in a booth at the Torrecampo fair (Córdoba). Upon entering she fell unconscious and, on the way to Pozoblanco, where she resided and was destined Guerrero, civil guard of La Manada, all began to touch her breasts and, the military, also to kiss her. The plays were recorded by Prenda on Guerrero's mobile. That video was distributed in two groups of chat. Upon arriving in the town of Cordoba, she woke up and sat in the front seat with Cabezuelo behind the wheel, while the others got out of the vehicle. Before arriving at the victim's home, the defendant asked him to make a fellatio. "Given the refusal of this, he slaps her face and another one on the arm, throwing her out of the car, while telling her she is a 'whore," the investigating judge details.

This case came to light during the investigation of the Sanfermines case. The Foral Police alerted of its existence and showed the recording to the young woman, who did not remember anything that had happened on the night of May 1, so she did not report what happened until then.

The defense does not agree with the story of the facts or its qualification and, at the oral hearing, if your request for the video is challenged, it will ask that the defendants be convicted solely for a crime of vexation. "The comments are unfortunate, but the images do not have a sexual content, they humiliate and vex it, but there is no sexual abuse," the lawyer for SendsAgustín Martínez Becerra, who points out that the young woman got into the car of her own free will.

During instruction – which began in October 2016 and lasted until September 19, 2018 – La Manada's defense requested that the video not be taken into consideration as it was incorporated into the procedure since another investigation. This argument is the same as your lawyer will follow this Monday, during the previous issues phase. “The cornerstone of this trial is video. Without him there is nothing and it is a recording prior to what happened in the Sanfermines, why are the police going to investigate on April 30 an act of July 7? That is a prospective investigation, ”says the lawyer of the accused. "In any case, the recording was obtained in the investigation of another cause", abounds. An argument that does not share the Clara Campoamor association, which intervenes as a popular accusation. “We are facing what is called a casual finding and no right has been violated to the accused, since they voluntarily handed over the motives,” says lawyer Patricia López. The holder of the Number 1 Criminal Court of Córdoba ordered in a car dated October 17 this year the celebration behind closed doors and without the presence of the public of the reproduction of the video document requested by the accusations.

The relevance of the expert evidence

After the previous questions, the same Monday is scheduled to appear for the accused. The four young people, who during the instruction intervened through videoconferencing from the prisons in which they were confined in a preventive manner in the case of the Sanfermines, then refused to testify and are expected to repeat that same strategy in the oral hearing, according to He has anticipated his defense. "No matter what they say, they assume that they will be condemned," they say from the surroundings of La Manada. Everyone has been in Córdoba prison since the beginning of this month, waiting for oral hearing.

On Tuesday the declaration of the young woman is expected, which will be behind closed doors and without the presence of the public or press, according to the judge's disposition. During the investigation, the victim testified up to three times. His lawyer, at the request of the family, has declined to make statements to this newspaper, in line with the attitude he has maintained since the investigations began. That day the other witnesses will also appear. Twenty people are called, according to sources from the TSJA, including the police officers who discovered the video and Ángel Boza, the fifth member of La Manada, who did not travel to Pozoblanco on May 1, but was in one of the chats to those who sent the video.

On Wednesday the expert tests will be practiced. There, forensic doctors must explain, among other issues, the drug analysis taken to the girl when she was located by the Foral Police. In the chats where the video was distributed, comments were made about “burundanga”. No trace of that substance has been found, however. In his indictment, the prosecutor states that “it has not been possible to determine whether she took a narcotic substance deliberately or without knowing it.” On Thursday 21, she should conclude the oral hearing with the submission of final reports by the parties.

Goodbye to the Blue Dog of Tropical Beer