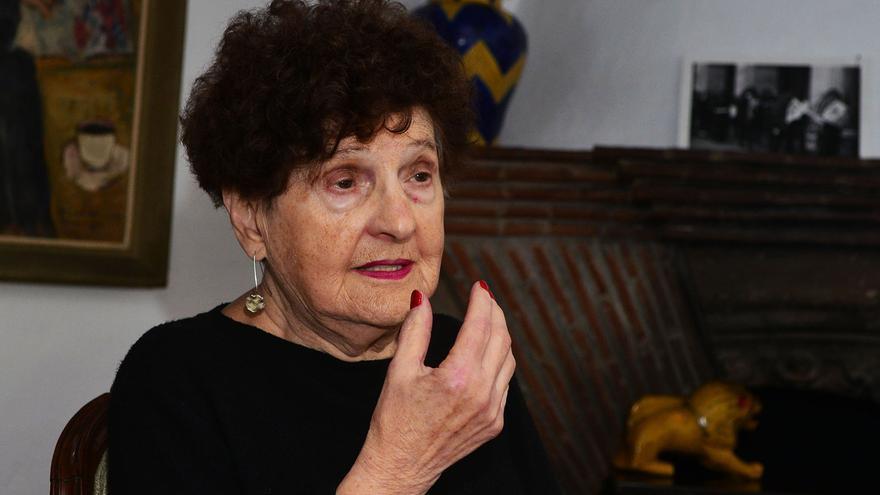 Mexico City, Aug 7 (EFE) .- An in-depth study, line by line, of the "True History of the Conquest of New Spain", by the chronicler Bernal Díaz del Castillo, was the basis for the Mexican academic and writer Margo Glantz will investigate a fundamental character in the conquest of Mexico: La Malinche.

Glantz (Mexico City, 1930) is one of the greatest connoisseurs of Malintzin, Malinalli, Malinche or Doña Marina, a key figure 500 years ago during the fall of Mexico-Tenochtitlan, on August 13, 1521, and the conquest of Hernán Cortés supported by the natives who were against the Aztecs.

"In that text, Díaz del Castillo vindicates the role that the other soldiers had played in the conquest of Mexico and the importance of this character," Glantz said in an interview with Efe.

"At first she was a slave handed over as spoils of war, as a tribute, but which showed that she was more intelligent and capable of understanding things in a truly impressive way," he added.

Glantz, who held a chair at the Faculty of Philosophy and Letters of the National Autonomous University of Mexico (UNAM) to learn the meaning of what was written by Díaz del Castillo, coordinated the book "La Malinche, her parents and her children" (1994 ) on the role that women occupy in the history, identity and idiosyncrasy of Mexicans.

La Malinche was a Nahuatl woman, originally from the current Mexican state of Veracruz. "She was very young - between 15 and 17 years old - she knew perfectly Nahuatl and Mayan and in a very short time she learned Spanish," said Glantz.

He recalled that it was given to Cortés when he set foot in the new territory and later she was his translator, his lover and the woman who led him by the hand until the victory over Moctezuma in Tenochtitlan, where Mexico City currently sits.

But she was not only a translator or language as she is called in the chronicles, but "she was a diplomat who helped Cortés because she was an intermediary between the indigenous world and the Spanish world."

BERNAL, CORTÉS AND THE FIFTH LETTER

Regarding the chronicles of the conquest, Glantz explained that he specifically investigated Díaz del Castillo and the Letters of relationship of Hernán Cortés, but also others such as Bernardino de Sahagún, Bartolomé de las Casas and Francisco López de Gómara.

"The book by Díaz del Castillo is a wonderfully narrated and extremely important book for the history of Mexico (...) among the things he pointed out, his relationship with the figure of La Malinche stands out and that is why I was building a text that corresponded to the vision that He had Bernal de la Malinche, a fundamental character for Cortés, "he added.

The also novelist, essayist and translator recalled that Cortes "does not mention her more than once in the Fifth Letter of relationship", because Cortés "was only interested in showing that he was the one who had conquered (...) Cortés was obviously a very intelligent character, with a very logical strategy, but he wouldn't have done it alone. "

In the letter, Cortés says: "And so that he believed it to be true, that he found out about the language that he spoke with him, which is Marina, the one that I have always brought with me, because there they had given me there with twenty other women, and she spoke to him and certified him about it, and how I had won Mexico (...) ".

For Glantz "La Malinche is an absolutely controversial character" in the history of Mexico and he stressed that the way in which a character is ideologized has been recurrent over time.

"She is a very important character because she was a woman and women at that time were considered an accessory being for both the Spanish and the indigenous, but Malinche stands out in every way," he said.

When independence comes (1810) "it is considered as a traitor and its image begins to be reversed until about 1950, where the formula of malinchismo arises as capacity, a kind of betrayal, that is, Malinche is the symbol of betrayal."

Later, at the end of the 20th century, her figure "is vindicated by Chicana women - Mexicans living in the United States - who consider her as a kind of precursor and vindicate her in a very important way until she becomes an emblematic character."

In his research, Glantz recalled that he was able to discover "the historical Malinche, from the chronicles of the conquest and I do not like to ideologize her, because for me the most important thing was to highlight her role as referred by Díaz del Castillo and many of contemporary chroniclers to Cortés, "he indicated.

Glantz opened the cycle Vindictas historicas, which is part of the commemoration of the 500 years since the fall of Tenochtitlan on the TV UNAM channel.