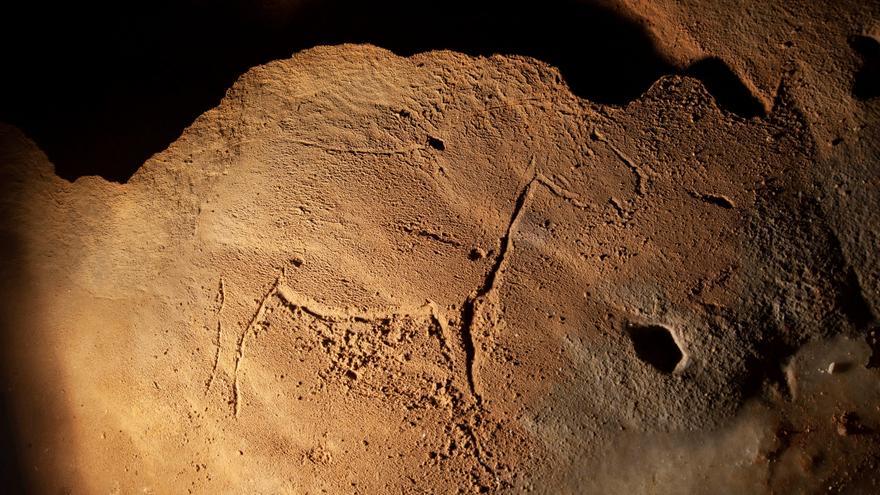 Santander, Sep 10 (EFE) .- Investigations after the footprints of children found in May in the Cantabrian cave of La Garma have revealed new traces of human activity during the Magdalenian era - about 16,500 years ago - as the footprints of adults, the engraving of a horse on the ground and red non-figurative dot paintings.

The regional vice president and counselor for Universities and Culture, Pablo Zuloaga, and the directors of the excavation, Roberto Ontañón and Pablo Arias, have presented these new discoveries of rock art and human footprints that "consolidate" La Garma as one of the prehistoric cavities "most important" for the knowledge of the behavior of the Paleolithic communities.

For Zuloaga, it is "extraordinary" that, after 25 years of research, this cave located in Ribamontán al Monte continues to provide finds of "magnitude" that allow Cantabria to be a "reference" in scientific and archaeological research, as well as "epicenter "in the works aimed at discovering the evolution of humanity.

But not only humans entered these two galleries located in an inconspicuous place and difficult to access, but the skeleton of a cave bear has also been found that, according to experts, could access thousands of years earlier through an area Exterior. In fact, a human footprint is also impregnated on one of his footprints.

Despite the fact that it is a part of the cavity that was not frequently visited, the Palaeolithic explorers left "evident testimonies of its passage", such as broken stalagmites and possibly displaced as "signs", tizonazos on the wall made with the torches with which they were lit and red spots in the narrowest parts that the researchers attribute "to the passage of people with clothes or bodies dyed with dye."

For the excavation directors, the most curious thing is the footprints in soft soil areas, because to the child footprints observed in the first visit there is now a trace of adult footprints located in the most remote part of the gallery. .

"The explorer advanced to the end, and when he could not continue, he turned towards the entrance," they maintain.

A few meters from this vestige, a representation of a horse engraved with a sharp instrument has been detected, and it is striking that it was made on the ground because it is normal that "they are found on walls or on the ceiling."

In addition, in different places of these new galleries, non-figurative paintings of red color have been detected, in the form of compositions of dots made with the fingertips after applying coloring.

The directors of the excavation venture to attribute these archaeological testimonies to the Middle Magdalenian period, that is, about 16,500 years ago, although the "fragility" of the remains found on clay soil means that access to the area for confirmation is limited. of these hypotheses by means of radiometric dating.

On the other hand, in the La Garma area where excavations of the Lower Palaeolithic occupations continue, dating back to about 400,000 years old, three bone fragments from elephant limbs, remains of a rhinoceros jaw and a splitter have been discovered. of ofita.

In the absence of a precise study that specifies the exact dates of these animals that served as sustenance for the inhabitants, the director of the excavation, Roberto Ontañón, considers that "an archaeological void is being filled in which it was thought that there were no occupations" between 100,000 years, with the cave of El Castillo, and one million, with Atapuerca.