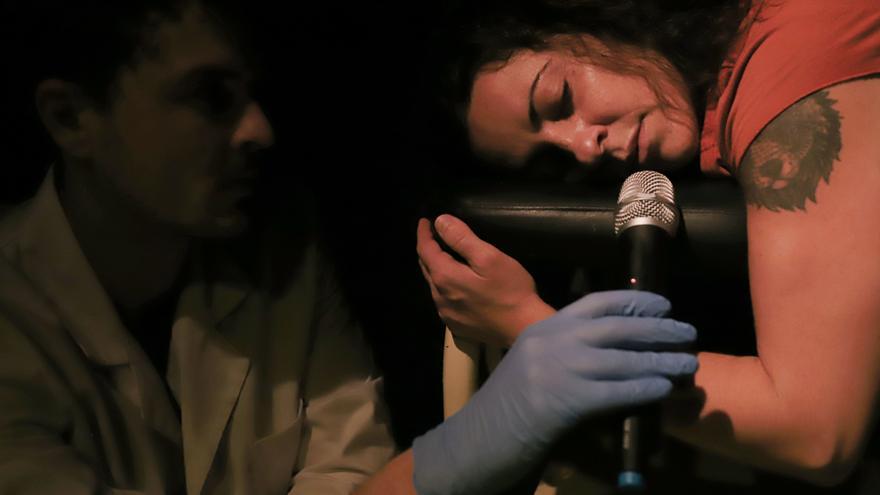 A woman enters a hospital to give birth to her first child. She does not know what the process is like, she is alone, scared and tired. But among the health personnel who treat her, no one listens to her. Nobody cares about her, only her baby.

Some tell her that she is fat and should be in better shape, others that if she skipped the preparatory classes for childbirth and for that reason she does not know how to act, others that if she does not push hard enough. They reproach her for not being a good mother before her child is born. There are even those who tell him what he complains about so much, that the pain is normal. "You will give birth to your children in pain," says the Bible.

This is the starting point of The trust, the first production of the Valencian theater Sala Ultramar. A work that talks about obstetric violence, the dehumanizing treatment that many women receive during childbirth, but also about inherited violence around motherhood. An intense and furious, yet hopeful, monologue directed by Eva Zapico and performed by Mertxe Aguilar, accompanied by Diego Ramírez and live music by Clara de Luna. A brilliant text written by Guadalupe Sáez, which can be seen in Valencia until June 13.

The trust was born more than two years ago, in a workshop that the author Guadalupe Sáez carried out with the playwright Sergio Blanco. Sáez had to build a story from three concepts: an object, an image and a real story. She then recalled her own experience during a delivery that lasted 17 hours. Everything he felt, the shame, the indignation but also the humor, became a text that is performed today in the theater.

"I have always worked on the issue of self-fiction," Guadalupe Sáez herself explains to elDiario.es. "But although I was a mother in 2018 and the book talks about my personal experience with childbirth, it also includes the birth experiences of many other people who have suffered obstetric violence, so widespread and invisible at the same time." Childbirth, for her, "is a very theatrical situation, because it allows you to play with many states of mind." For the playwright, giving birth "is a borderline experience that leads the narrating voice from super civilized to ultra barbaric speeches, and it is understandable because during the time that the childbirth takes place these states of mind are experienced by many women."

However, he recognizes that childbirth is not an element that is usually seen on the tables. "The issues that have to do with care and maternity wards are usually rare to see on stage," says the playwright, "with regard to childbirth, it is worth adding the silence that weighs on some female processes, which are really painful and dehumanizing."

He thinks that theater, as a reflection of society, shares the same silences as this: "When you stop, you automatically have the baby in your hands and you must exercise care. Your new condition as a mother means that you do not have time to reflect on that new condition and what you have experienced up to that point, the difficulties of pregnancy and the trauma of childbirth. There is no time to stop and think, much less to turn that into an artistic discourse.

Obstetric violence, understood as the appropriation of the body and reproductive processes of women by health providers, is a public health problem. So much so that the Ministry of Equality intends include it and classify it as a type of violence against women in the new reform of the Abortion Law.

It can be observed in childbirth in many ways: from an excess of medicalization, to a dehumanizing treatment, through the loss of autonomy and the ability to make free and informed decisions about their bodies, often subjected to interventions without informed consent, such as episiotomies or induction of labor.

"When I finished my delivery process, I didn't know how to explain what had happened to me," explains Guadalupe Sáez. "The moment a question arises, in which you cannot explain to yourself something that has happened to you, the need to find a meaning begins that, I think, is causing many pregnant people to start talking and sharing our experiences about this type of violence ".

For Saéz, adding to the loss of decision-making power and the dehumanizing treatment that many women receive when they give birth is "the absolute normalization of pain." He argues that "not only does the Bible tell you that 'you will give birth with pain', it is that they have told us that pain in the period is 'normal' and they have not told us about endometriosis. They have not taught us to share, they have taught us to take on the worst aspects of care. "

Starting from few formal elements, sparsely arranged in a hospital room - a stretcher, an eyedropper and a monitor - the interpreter Mertxe Aguilar starts a monologue in which violence is not explicitly glimpsed. His partner on stage, Diego Ramírez, tries to retain and dominate the protagonist's body through polished choreographies in which Aguilar, on occasions, even loses his voice.

Sáez says that in terms of staging and narrative development of his work, he left director Eva Zapico free. "Eva always works from the physical to reach the intellectual, instead of doing the opposite process, which is more common," she argues, "in this work is when the choreographies in which they try to reproduce what you live in childbirth crystallize : tiredness, the feeling of not being in control, the body pushed to the limit ... and that generates really surprising images ". Images, movements and phrases that turn a monologue like that of The trust in a disturbing and surprising experience, original approach to childbirth and motherhood as artistic motifs.