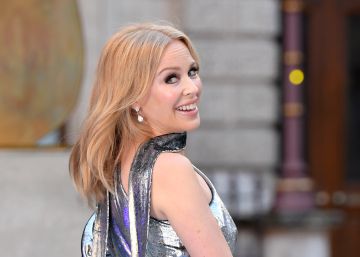 Minogue Kylie (Melbourne, 1968) closed the manifestation of the Gay Pride in Madrid in 2010. The public that packed the area of ​​Plaza de España and Gran Vía chanted, along with the Australian artist dressed as a Greek goddess, All the lovers, the simple one that he presented then. Nine years later, Kylie will be back in Spain the same night that Madrid will be filled with pride, but this time it will act 600 kilometers away, in the Cruïlla Festival that has been held for ten years at the Parc del Fòrum in Barcelona.

Minogue does not usually express his political opinions in public, but has never hesitated to lend his support to the community LGTBI, among which has many followers. This year, he has participated in Sydney's Mardi Gras, the Australian Pride. "I think it's important to celebrate how far the collective has already arrived, because it is also an effective way to remember that there has not always been so much tolerance," the singer said in a telephone conversation from London.

The star has just turned 51 and launches great successes, Step back in time, like the title of one of his singles. A double disc in which he reviews the songs with which he has carved one of the most solid and lasting careers of music. From his successes eighties with the Stock, Aitken & Waterman factory –responsible for Never Gonna Give You Up by Rick Ashley – to his flirtations with the country dance from his last album Golden, of 2018.

Many of those songs are on the summer tour that the singer began on June 20 at Hampton Court Palace in London. "It's a great success tour that celebrates my entire career. There are songs from all my times, like on the album, "he says. Until August 3 will act in the United Kingdom and Poland with a different deployment than usual. This time the staging will be more discreet and simple in comparison with the great boastings of light and mobile touring modules that stood in stadiums around the world as in the Aphrodite World Tour of 2011 that included several water sources among the Greek inspired columns. He has not even looked for a special name for the occasion. The concert series is simply called Summer Tour (Summer tour, in Spanish).

Like her Kylie Jenner, who in 2017 won the battle for the use of the name Kylie for commercial purposes, Minogue has been fascinated with Rosalia. Both coincided in an awards ceremony and last Sunday in Glastonbury, England. "We met and he asked me for advice. I was perplexed, "Minogue recalls with passion. "I've seen you act, have you seen what you just did? How can I give you any advice? "

In Barcelona there will only be her, her band, a big screen and all her great successes. Accustomed to promoting the songs of her latest albums in her concerts, this time she will give free rein to nostalgia. "The concerts in which I present the new songs on my albums do not leave much room for the classics, so now I'm going to take advantage of this to sing about everything," he argues. It will interpret almost all the subjects, in addition, as they were conceived. No remixes or reinterpretations. "Those of the eighties will also sound like then because I know that the public wants to hear those sounds as they were and to remind them of the times when they listened to them," he explains. "Most are electronic but there will be a couple of acoustic tracks. I will be accompanied by an exceptional band, with two guitars instead of one, which will provide a feeling very special, even the most electronic, "says the Australian.

One style per decade

Kylie Minogue came to music because she triumphed as an actress in the series Neighbors, popular in the United Kingdom. He recorded his first album at 19 years old. The singer came to the studio, recorded her part and left, remember. With those compositions, pure optimistic and danceable pop, he conquered the charts of the United States and Europe.

He soon took control of their work, but has always trusted, as a good pop star, in their A & R, responsible for selecting the songs that will be part of a disc. In the nineties his career turned to pop rock that Courtney Love and Sheryl Crown had popularized and with the new century claimed a place in the Olympus of the divas of dance next to Cher and Madonna. Spinning Around, but above all Can not Get You Out of my Head, were the singles who inaugurated their golden age.

In this time he has cultivated unpretentious music, just to dance, and has projected an image of a queen of elegant disco music and with the right sexual charge so as not to scandalize anyone. Always away from excess. A Jane Birkin of electropop that has counted for each disc with the producers that handled the cotarro in each moment. Since Cathy Dennis, responsible for Toxic from Britney Spears to Calvin Harris, Freemasons or Stuart Price, architect of Confessions on a dancefloor of Madonna.

Before the pop queen reunited with Maluma in a slow reggaeton or Janet Jackson with Daddy Yankee, the Australian launched in 2018 a more Latin version of Stop Me From Falling with the Cuban salsa duo Gente de Zona. "Latin music is fascinating and full of passion, it's rhythm with capital letters. For me it is something very exotic because I grew apart from those sounds, "says the artist. That has been his closest approach to a thriving genre with which every time more artists are playing in search of new audiences.

She, however, can not imagine taking out a record full of Latin rhythms like Madonna. "It's a little late to join me," confesses the artist who celebrated three decades of career in 2017. Now he feels eager to do a retrospective, rather than investigate new sounds. He feels nostalgia and something more when he reflects on all these years. "Sometimes I think, what were you thinking about putting on that hair and those giant earrings and those men being so short?" Laughs the Australian evoking the cover of her first album, which included one of her greatest hits Locomotion, which is still remembered by a good part of the public in the United States. "I'm still the girl of Locomotion"He says. In the rest of the world is an authentic diva who has weathered the fashions without giving up his clubbing style chic. "Emotion, sacrifice and joy is what comes to mind when I think of these 32 years," he concludes.