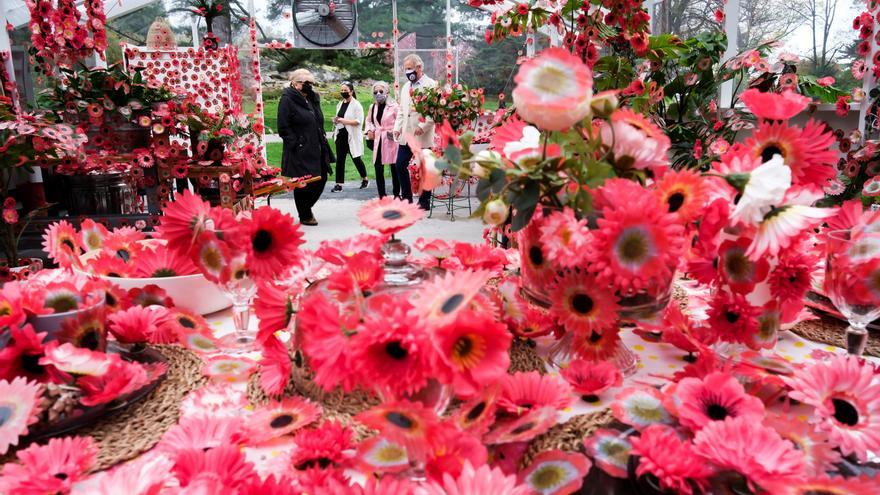 New York, Apr 23 (EFE) .- The flowers and polka dots that star in the works of the Japanese artist Yayoi Kusama have traveled the world, injecting color and joy wherever they go, elements that are more than necessary in the last city in which they have landed: a New York that begins to stretch after a winter of intense darkness.

The almost childish tones and shapes of Kusama these days decorate the already splendid New York Botanical Garden, located in the district of The Bronx, which in April is flooded by tulips and daffodils, accompanied by almond, cherry and magnolia trees in flower, exquisitely maintained.

“This is one of the most anticipated exhibits at the New York Botanical Garden and we are excited that visitors can finally see it,” the institution’s spokesperson, Nicholas Leshi, explained to Efe.

Thanks to that delay, however, the 92-year-old artist, whose works have become an important attraction for the general public over time, has designed four new pieces, which make their debut in this New York green space of 100 hectares.

Among them, “Dancing Pumpkin” -Dance Pumpkins- (2020), a monumental sculpture almost five meters high of a yellow and black pumpkin with long legs that appear to be in motion, under which visitors form a long line to take a picture.

Its popularity is evident by the two guards who not only guard the piece, but also insistently encourage the public not to pose more than a few seconds for the coveted snapshot.

“Flower Obsession” -Obsesión Floral- (2017/2021) also opens in New York, a traditional greenhouse in which visitors are invited to stick on the surface as they please pink and red plastic flowers that are distributed before enter the space, turning it into a participatory piece.

The work, depicting a sun with meandering tentacles painted with white polka dots on a deep red and lapis lazuli blue, reflects Kusama’s clear obsession not only with vitality, but with depicting the forms of nature.

The popular mirror installations of the Japanese artist, who has swept her “infinity rooms” -infinite rooms-, are also present in the exhibition with another of the new pieces: the “Infinity Mirrored Room – Illusion Inside the Heart” (2020 ), which at the moment can only be seen from the outside, so it is converted into a large cube that reflects all the flora it is surrounded by.

The public is also astonished with the “Narcisus Garden” -Darcissus Garden- (1966/2021), an installation made up of 1,400 stainless steel spheres of about 30 centimeters in diameter that float on a 70-meter long pond of water , that glide and collide with the breeze, or “Hymn of Life” (2007) -The Hymn of Life-, large tulips that are reflected on the water surface on which they are.

In closed galleries, the visitor can also review Kusama’s trajectory in New York, where he arrived in 1958, and his works on paper or in smaller sculptures.