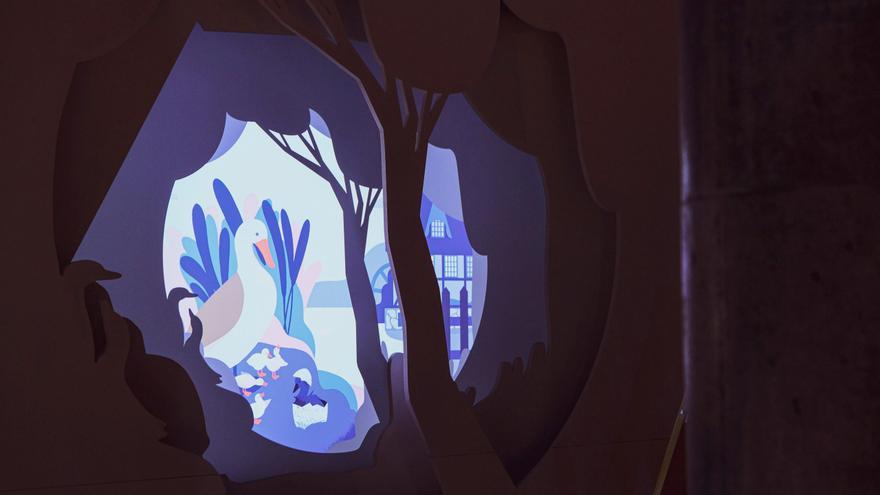 Odense (Denmark), Jun 19 (EFE) .- The Danish city of Odense opens at the end of this month a museum dedicated to the figure of its most illustrious son, Hans Christian Andersen, in which the Japanese architect Kengo Kuma and a dozen of artists have built a universe full of magic and sensory stimuli to interpret the work of the popular writer of children's stories.

"It is about creating a complete artistic experience in which architecture, sound, voice and a flow of images constantly create new encounters between the visitor and Andersen's tales", explains Henrik Lübker, inspector of the museum.

Linking with the very present idea in his stories that the world is actually deeper and richer than it seems, an international competition was called, won by the Kuma studio, which has designed, among other works, the Tokyo Olympic Stadium.

Inspired in part by the story of "El Yesquero", in which a tree reveals an unknown subterranean world, Kuma has erected a 5,600 square meter building in which two thirds are underground, without any clear facade and located in a labyrinthine garden that reinforces the magical character of the museum.

"The idea reflects Andersen's method, in which a small world suddenly expands into a larger universe. In that universe there is no hierarchical order, no facade or defined direction," explains the architect in the building's catalog.

Kuma speaks of expressing the "duality of opposites" that surround the human being: the real and the imaginary, nature and human creations, the human and the animal, light and darkness.

The absence of straight lines compared to the predominance of the curve is related to the idea that stories hide things and force the reader to find out their real meaning, a commitment to the ambiguity linked to the way of thinking of the author of "The Ugly Duckling" , "The Little Mermaid" and "The Tin Soldier".

The interior of the museum aims to recreate the experience of Andersen's life and tales through works by a dozen artists who have reinterpreted some of his most famous works.

Among them are the Brazilian Henrique Oliveira, who has mounted an installation inspired by "El Yesquero" and the Spanish Sandra Rilova, author of many of the illustrations and animations that decorate the interior of the building.

Danish screenwriter Kim Fupz Aakeson and American writer Daniel Handler, better known by his pseudonym Lemony Snicket, have built the listening experiences that accompany the visitor on their tour, which at the moment can only be enjoyed in Danish and English.

The works exhibited continually appeal to the participation of the spectator, who in a virtual mirror can see himself dressed in the most sumptuous clothes and ornaments, while those who contemplate him from the other side see only the original costumes, in imitation of " The emperor's new suit".

In the installation inspired by "The Shadow", another of Andersen's most famous stories, it is the visitor's own silhouette that takes shape and behaves unexpectedly, just like in the story.

In another of the interior spaces, travel objects and memorabilia of the writer virtually "fight" about their importance for Andersen, while his manuscripts, poems and dramatic works ask to be read aloud and paper figures claim to be released by the visitor. .

In this way the story of the writer is also told, dispensing with the usual explanatory posters with long chronological explanations.

"We did not want to build a building full of data, we do not want to be a museum, but a fairy tale. We want to inspire," sums up Lübker.

DELAYS IN WORKS DUE TO THE PANDEMIC

The museum, which has cost about 390 million Danish crowns (52.4 million euros) and expects to receive between 200,000 and 300,000 visitors a year, has been directly affected by the coronavirus pandemic.

The difficulty of accessing some materials caused by the travel and movement restrictions implemented by the different countries has generated significant delays in the construction of the building, which will not be finished for its inauguration.

When Queen Margaret II inaugurates the museum, located a few meters from the writer's birthplace in the center of Odense, Denmark's third city, the exterior will not have been finished, nor will the garden, although those responsible ensure that all the interior installations They will be ready, except for a space reserved for a children's play area.

The decision to go ahead with the inauguration despite the delays responds to the desire to take advantage of the high summer holiday season and thus receive as many visitors as possible, a figure that would be significantly reduced if it were postponed until the end of the works. Of summer.