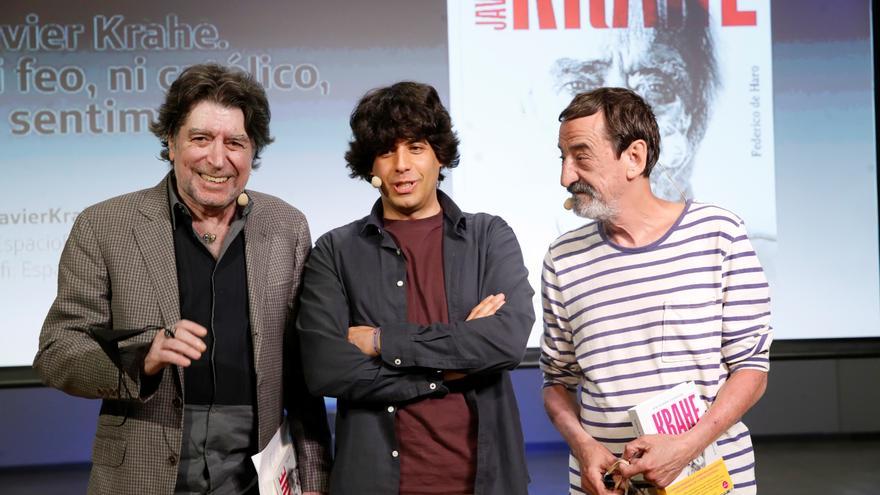 Madrid, Jun 1 (EFE) .- "He was the best, my brother, my teacher, a wise man, a very unique person, a doctorate in sarcasm", are some words with which Joaquín Sabina has remembered his "best interlocutor", Javier Krahe, during the presentation of his posthumous biography "Javier Krahe. Neither ugly, nor catholic, nor sentimental".

"What I am as a singer is owed to Javier Krahe. He was not the singer that I wanted to be until I realized that I wanted to be Krae", said this Tuesday Joaquín Sabina during the presentation of the biography at the Fundación Espacio Auditorium Telephone.

"Krahe had various knowledge: one day returning to Madrid, the 4 cans he had stopped and asked me: 'Do you have a gum?', I gave it to him and with it he joined two cables and fixed it," Sabina recalled laughing .

He has also recognized that the composer is very present in his life, "every time I finish a song I wonder if he will like it or not; or rather, if he will be ashamed or not"

"In this book is the Krahe as I loved it and how I met it," said an emotional Sabina, who has pointed out that the biography is "fun and timely, necessary and essential."

With these pages, "the unpayable debt that this country has with Krahe is beginning to be paid off," said the Úbeda singer, who has always been "demonized that Krahe was ignored in some sectors.

One of the things that he most appreciates, he said, is that his daughter Carmela, goddaughter of the singer who died in Zahara de los Atunes on June 12, 2015, "cannot live without him." Until her last day, "she kept me up to date on her adventures, I went to all her concerts."

Sabina has pointed out that she has never enjoyed more success than in the years of the mythical Madrilenian venue La Mandragora, "years of hubbub, in which few people came, with whom she really wanted to sing and have a few drinks."

And he has warned that after this biography "a very sensible study of his songs is needed, rhyme by rhyme, accent by accent, because he had an obsession with metrics, in addition to being the best song writer, from the point of view of the lyrics , from all over Spain ".

"He was the best. I drank gin and tonic, with him I started drinking whiskey. I should stop smoking like he did," Sabina said, while recalling that they were united by their taste for the songs of Georges Brassen and Leonard Cohen .

During the presentation Sabina has read three sonnets that she wrote for her friend. "Within this pandemic, this economic crisis, it could not have occurred to me to spend a better afternoon than talking about Javier, even though it is not possible to smoke or drink."

A meeting in which Javier López de Guereña has also been, "Krahe's favorite son by self-designation and his companion for many years as a guitarist, producer and above all as a friend, also as a holiday parasite", as the author of the biography, Federico de Haro.

Guereña, a musician who has allowed the author to contrast information and testimonies, has remembered Krahe as a "free, calm and hospitable" person.

His guitarist and right hand man has revealed that his summer stays in Zahara de los Atunes were for more than two months. "He was bored and made songs."

His habits were simple: "he got up at eleven o'clock, had breakfast reading the newspapers, smoked the 12 o'clock joint, drank a wine, took a nap and then with a nescafé he would write until night, at which time he would go out to have a drink ".

Laziness had her extolled. "The great thinkers are those who have not known how to do anything," said the guitarist.

This is not a typical biography, "the anecdotes have been the common thread in many chapters," said Fernando de Haro, who has detailed that two years of documentation and 60 interviews have been necessary to shape this book, including his widow, Annick Bloyard, his children Violante and Marco, and friends and colleagues such as Joaquín Sabina, Javier Pla, El Gran Wyoming, Pablo Carbonell and Óscar Ladoire.

According to Haro, "Krahe has been a genius, a free person, who never confused the urgent with the important. He was not a slave to money or self-pity."