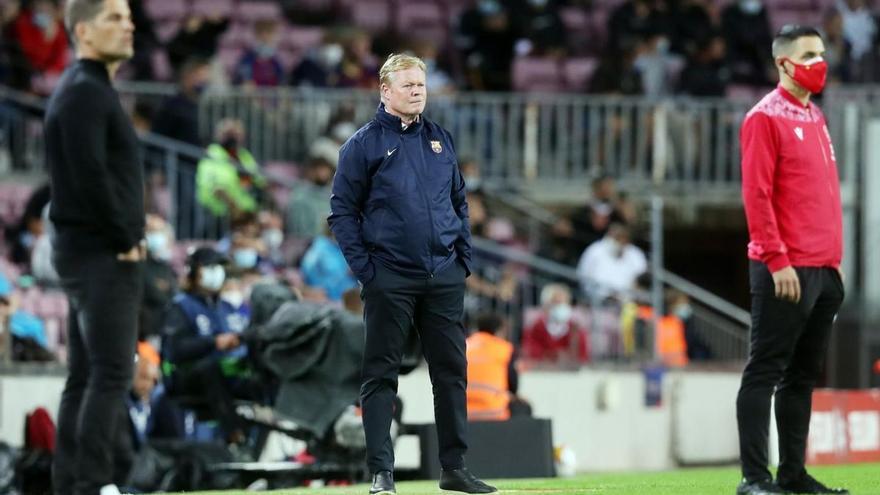 Araujo’s goal portrayed the Barça from Koeman. A primitive Barça, hanging balls in the center of the area in search of towers that would give them a booty. However minimal it was. The Uruguayan jumped in search of the ball, but did not arrive. In the first instance, it did not finish. But he had time to get up off the ground while Pique, another center forward by force, connected with Gavi, prologue of the delicate center to Araujo. And the goal of the defender to synthesize the poor man who has been strangling the Barça game for years.

TO Joan Laporta, the Barça president, stirred the demons in the box, while ponder Koeman’s removal, a technician who has never felt his.

“If you see the list, if you see the summoned, what do you have to do? Play tiki-taki, tiki-taki. We have done what we had to do, try to change the game in a different way, “said the coach, already tired and fed up with the debate about the abandonment of the style that the team has lived in recent times.

His future is conditioned on the day to day. There is no more margin and time is running out. The club is looking for a coach who is not an interim. Someone who can be what they consider “a technical mandate”, which further complicates the choice of Koeman’s replacement, also conditioned by the lack of financial resources.

Laporta went to the market in the summer and did not find what he was looking for in those 15 days of “reflection”, which ended with the Dutch weakened, but still on the Camp Nou bench. Now, the manager is at the same crossroads with the very serious problem of having the competition underway and the great coaches off the Barça radar. Outside both economically and sportingly.

The names follow one another (Robert Martínez, Xavi, Cocu, Löw …) and are repeated, Barça lacks a structure that makes the right choice, waiting to see if Laporta has the temperance and serenity that he exhibited in 2003 after the bad start of Rijkaard or behaves like Bartomeu in the traumatic and sterile exchange of Valverde with Setién (January 2020).

Araujo heads the tying goal with Granada at the Camp Nou. FCB

Koeman, meanwhile, has never felt the confidence of the president, who took office in early March. And since then, beyond a few affectionate and diplomatic words in the inauguration speech, they have had a complex cohabitation. Pure diplomacy of Laporta that concealed, however, a disagreement that became evident with the loss of the League last season, although the leader had time to celebrate, including a visit to the dressing room, the Copa del Rey, only title in two years.

Barça is in permanent involution, capable as it is of passing from a trident formed by Messi-Neymar-Suárez (2017) to an attack formed by such an unusual trio: Luuk de Jong, Piqué, who came out of nine pure, did not approach Ter Stegen, and Araujo, who raised the flag of hope.

“We don’t have players who have one-on-one or speed. I’m not going to say more! It seems that I have to give arguments in everything and I think that the attitude of the team must be highlighted“, said Koeman vehemently, tired of so much discussion in a club that has lived four years of endless decline, thus eroding the model until it becomes a wreck, with Messi sadly living his first days in Paris, Laporta tormented by the sporting heritage and economic received from Bartomeu.

In 18 months, the club is about to consume three coaches. Ernesto Valverde was fired badly in January 2020, consuming the disaster that for the first time in two decades a technician was thrown out in the middle of the course. Quique Setién arrived and lasted eight months. The 2-8 in Lisbon was his epitaph.

Ronald Koeman appeared to pilot the most complex stage in the club’s contemporary history, abandoned midway by the resignation of Bartomeu along with Messi’s burofax that caused a chaotic season. And Laporta, now, plans to do what he wanted to do in the summer, but couldn’t. He also wanted to stay with Messi, but he couldn’t either. The president muses to dismiss the Dutch coach, although then the lack of a replacement frustrated that desire.

Laporta, together with Koeman, visits the sports city. FCB

“I’m not going to talk about my future anymore!”, Declared Koeman, aware that his future is running out, unless Laporta radically changes his mind. Names fly overhead, but the proximity of the duel with Cádiz next Thursday compromises the position of the board, which, because it does not have a replacement in Barça B since the figure of Sergi Barjuan does not seem valuable to change the course of the first team.

Nor does he have a structure in which he can find the internal replacement for Koeman, unless Laporta throws the blanket over his head and bets on Albert Capellas, who came to the club to strengthen the methodology in the quarry (he has not been presented officially) and whose last job on the bench dates back to the leadership of the Danish Under-21 team.

Those are the options of the house since the president does not want to place Jordi Cruyff (director of the international talent recruitment area) at the crossroads of offering him, even temporarily, the position of coach. And they are, of course, the usual names: Xavi, whom Laporta did not want to bring in the summer, Joachim Löw, the former German coach, Philip Cocu, who managed Memphis and Luuk de Jong at PSV Eindhoven, Robert Martínez, the Belgian coach, short-term committed to the League of Nations (plays the semi-final against France), to whom the World Cup in Qatar-2022 will be it seems far away.

In 2003, Laporta was daring by betting on Frank Rijkaard, a coach who arrived at the Camp Nou after relegation to the Second Division with Sparta Rotterdam. In 2008 he maintained that daring and daring air with the choice of Pep Guardiola, whose greatest success was to successfully manage Barça B, who would later become champion of the Third Division. And in 2021? In the summer he kept Koeman, almost against his will. Now? More of the same. Shut up and keep looking, but without success.

Meanwhile, Koeman, who is treading increasingly swampy territory, defends with his word that Barça would be at the opposite of his style in the second half against Granada, after remembering that in the first half he did play with him. 4-3-3. “With what there is we have done the maximum. There were no strikers on the bench. We look for another way to tie or try to win, putting Piqué and Araujo at the top. For me this has to be highlighted and not that it is not Barça football. Once again, Barça today is not the Barça of eight years ago, “said the coach.

And he, who considers himself “a realist and not an opportunist”, has no doubts. Laporta, on the other hand, yes. You have many doubts that holding Koeman is the most appropriate solution, as much as this reminds the president from the press room of the scarce resources he manages in a club so precarious that it has lost Suárez, Messi and Griezmann in a year.

Although if Laporta already burns the coach’s fuse, the spotlight will go directly to the box. “We don’t have much speed on the wing. Coutinho is more about going inside; Demir is not about going deep. And that’s the way it is. With Ansu and with Dembélé you have more depth in the team. If there isn’t, there isn’t. So, there is than looking for other things and other ways. Then, forgive if you don’t understand me. If you don’t understand me, it’s my fault, “Koeman confessed with a defeated tone, feeling helpless and misunderstood. And all looking at Laporta, in the center of the chaos.