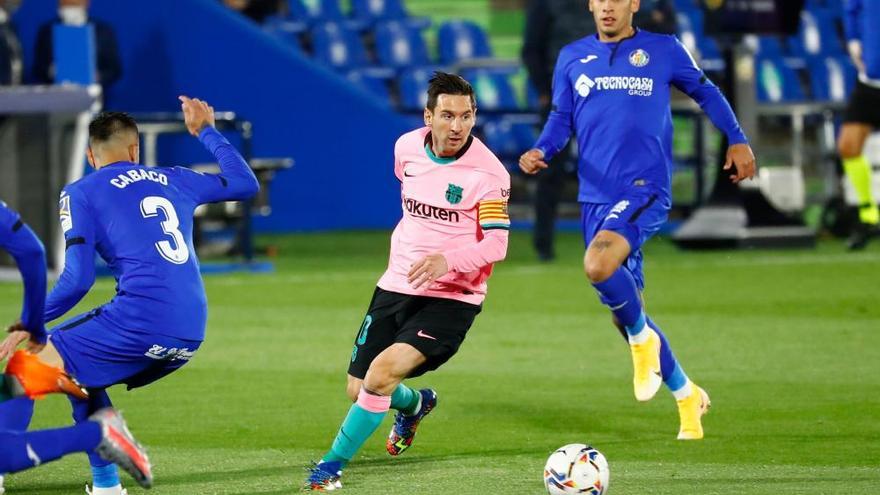 A lone penalty goal scored by Jaime Mata gave Getafe victory this Saturday in the match of the sixth day of The league Santander against FC Barcelona disputed at the Alfonso Pérez Coliseum in Madrid.

Barcelona crashed into the tactical trap of José Bordalás and he lost to Getafe who triumphed with the approach of a coach who managed to annul the Barça team with an almost impregnable defensive network.

As almost always, Getafe was presented as an uncomfortable team that mercilessly hammering its rivals in every action. And more after losing 3-0 to the Real society last day, with his pride hurt by receiving so many goals when it usually just doesn’t fit.

Barcelona woke up to the worst possible Getafe during the first half hour, in which he could not breathe for the suffocating pressure of the ten warriors of José Bordalás. From the two at the top, the Colombian Juan Camilo “Cucho” Hernández and Jaime Mata, to the four at the bottom, they all applied themselves thoroughly to destabilize Koeman’s idea.

The Dutch coach turned his head on Ferencvaros and surprised with the inclusion of Frenchman Ousmané Dembélé and Pedri. He also released Sergiño Dest with a changed leg on the left side due to the loss of Jordi Alba and, at least during the initial section of the crash, it seemed that little was working in a group at the mercy of the Azulón push.

In those thirty minutes, Barcelona could barely hold the ball. Even less, find holes to come out to the counterattack. There was always a Getafe player harassing his rivals, no time to think and give way to the verticality that Koeman longs for.

Except for a shot to the stick Messi, the azulgrana box presented no version of the best part of his curriculum. And, that occasion, It was a warning of what Pedri was going to do when Getafe lowered the bar. He demonstrated an impressive spatial vision that would later become a constant rather than an exception.

While Barcelona managed to gain control, Getafe achieved, thanks to the leaks and movements of the “Cucho”, generate danger with rapid robberies and direct punctures. In one of these, the Colombian gave a good pass to Nemanja Maksimovic that ended up in the body of Neto after a poisoned shot from the Serbian from inside the area.

It was the best occasion for the Bordalás men, who, tired, gave up the domain to Barcelona in the last quarter of an hour of the opening act. There Pedri reappeared to show that his incidence in Messi hitting the post was not an isolated act. The midfielder took the controls and began to display himself with self-confidence and the simplicity of a mature player.

His was the pass to the hole that he wasted Antoine Griezmann at the exact half hour. The Frenchman made a move that reminded Griezmann of the best times, but inexplicably He sent the ball into the stands with a shoe when he was in front of the goal defended by David Soria.

Jaime Mata answered with a shot that went off in a mirage of what Getafe had been in the first bars of the duel. The Barcelona the rest of the first half was not intimidated again and unsuccessfully circled the Soria area until halftime.

In the resumption the script returned to the one at the beginning of the crash, with Getafe again with air and strength to annoy Barcelona at the exit of the ball. He succeeded and, unlike in the first half hour, he got his prize thanks to a clear penalty from Frenkie De Jong on Djené Dakonam that Jaime Mata did not miss.

With the 1-0, Koeman moved the bench and took the two sacrificed to the field at the beginning: Ansu Fati and Coutinho left for Dembélé and Pedri, who said goodbye with a good note after sign an exceptional first act.

Ahead, both had the difficult mission of opening one of the best defenses in the championship that grows when it plays with an advantage on the scoreboard. In this state, Getafe is an expert in the art of mischief, to manage the times at will and make the clock always tick in your favor.

Practically until the 70th minute, Barcelona did not scare Soria again, who did not have to strain to see how Ansu Fati’s shot from outside the area went away from his goal. It was the only real attempt since Getafe’s goal and until the end because Bordalás’s men made the field very narrow and small.

The minutes passed and Barcelona, ​​unhinged, could not cross the Getafe wall, which could even do the second and third with two very clear occasions of the “Cucho”. The post and an erratic shot against Neto that ended above the goal, prevented it. I

In the end, Bordalás took the moral victory despite Djené’s last shot off the post at his own goal in added time. His tactics triumphed and the Alicante coach for the first time was able to celebrate adding three points against a great: he had never won at Real Madrid, to Atlético or Barcelona. At last he succeeded, true to form, hammering the mine like a hammer to add a victory for insistence.

With this scoreboard, Saturday’s day ends with four teams (Real Madrid, Getafe, Pomegranate and Cádiz) tied at ten points at the top of the table, and with Betis, Real society and Villarreal ready to beat them on Sunday.

Incidents: match corresponding to the sixth day of The league Santander played at the Coliseum Alfonso Pérez in Getafe behind closed doors.

Felipe Reyes, the longevity of the ‘Espartaco’ of Spanish basketball