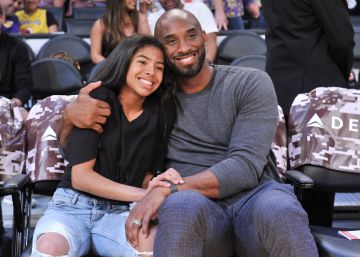 To those of us who love sports we have gone a reference, an idol, and we continue with a shrunk stomach. Our voice breaks when we talk about Kobe Bryant and we find it hard to believe that it is gone. Thousands of times we try to imitate him, replicate his movements on the track, his winning pitches; thousands of times we sat down to discuss whether Michael Jordan could be shadowed. He was the only one able to endure that comparison, to assume the role of successor. There are stages and names that mark times and he managed to transcend despite living with the greatest.

Kobe showed that he loved basketball with passion and in all its extension, without distinguishing genres. That is why he had become an illustrious mentor of young players. “All the fans They tell me: ‘You have to have a boy, someone who comes to the NBA and keeps your legacy. And my daughter Gianna listened to those things thinking, “Hey, I have that.” And it is true that he has it. I don’t need to have a boy. She will play in the WNBA. He knows the game, he loves basketball, ”said Kobe, father of four daughters, on an American television program. His figure would have had a crucial relevance in the course of women’s basketball because when a genius insists on making possible what seems impossible is more than likely to achieve it. Through the impulse to his second daughter, 13, the task was underway.

In those was Kobe Bryant, almost from the shadow, working for the balance to equalize giving greater visibility to women. After the tragedy his role has been highlighted trying to make his daughter fulfill his dream of playing as a professional, as many parents would do, but Kobe went further. From the Mamba Academy I was at it, for example, working to host Los Angeles Sparks (the WNBA professional Californian team) there to train in summer and conduct annual technification training with the players. From the mythical Diana Taurasi to the promising Sabrina Ionescu, all have shown their dismay at the death of an emblem in the fight for equality. During the summer it was usual to see Kobe and his daughter Gigi in WNBA matches and winter took advantage of it to go to the women’s NCAA tracks. “It is a blank canvas. He has a lot of intelligence and it’s exciting to see how he discovers concepts. It has an innate intensity, ”he recounted passionately in another interview in The Players Tribune the one that traced the evolution of Gianna’s career to professionalism. “I write training plans every day. Now he is learning a footwork that I was taught with 20 years. It is a six-year plan and we are only in the second. You have to show them patiently every detail, ”he explained.

There are players who when they finish their career move away, have a more distant relationship with the track or directly turn the page, but Kobe was always there with the ball and the basket in mind and now acting as a mentor. I know that he talked constantly with university and professional players whom he invited to train at his academy, he worried to meet those who did not play in Europe during the winter period to offer to stay with them and perform periodic training. Bryant worked for a basketball regardless of gender. Basketball is basketball and he, among the greats, was the first to see it. Days before his accident, he said on CNN that some of the WNBA players would have no trouble competing in the NBA. A song to spur the dreams of Gianna and her companions, a seed to feed the utopia of a future in which women are allowed to make the leap to the best league in the world.

Kobe, thanks for your baskets, for your competitiveness, but above all thanks for your love of basketball, for showing yourself human and close after your retirement. For your universal commitment to basketball before becoming eternal in our hearts.

Team LeBron takes the All Star in memory of Kobe Bryant

Win, the magic word in Madrid, by Lolo Sainz