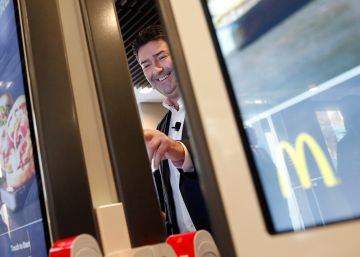 A romance. A layoff That's how drastic are the big corporations in the United States. Last week McDonald’s CEO Steve Easterbrook was forced to leave his post for violating the code of conduct of the hamburger multinational, which prohibits sentimental relationships between employees, such as the one it maintained. Thus ended a mandate that accumulated 17 consecutive quarters of growth, as Easterbrook himself said in his farewell message to the staff, where he acknowledged his mistake.

It is not the first time nor will it be the last to happen. There are numerous examples of leaders who were relieved of the job when their skirts were known. Cases of IntelHP Texas Instruments or Snapchat are the most popular. And it is because in the Anglo-Saxon world much more attention is paid to the scandals caused by courtships in the office than to the corruption practices, which are much worse seen in Europe, says Carlos Recarte, founding partner of Recarte & Fontenla Executive Search. The Me Too movement, which has brought to light many cases of harassment starring powerful men, has a lot to do with it.

“A manager has to set an example in the organization and be impartial,” says Recarte, something that clashes with the lack of transparency or concealment of these relationships, which may lead to conflicts of interest.

In the United States codes of conduct are taxative; The ban on romances between bosses and subordinates is widespread, says Mario Barros, a partner at Uría Menéndez. “And in Spain we have begun to see it with the importation of these manuals by US companies to their local subsidiaries. But another very different thing is the validity that these clauses may have in our country, where you can not ban relationships at work or fire for the mere fact of maintaining them because the Constitution protects the right to privacy. ” The employer is not the one to say what the workers have to do with their sentimental life, he continues; I could only if I interfered at work and created conflict situations. Here the favor treatment is the most common.

That's why law firms advise adapting codes of conduct to local regulations, explains David Díaz, responsible partner in the Baker McKenzie work area. The office of North American origin has transformed the ban into a recommendation, as is usually done in Europe, which is just what it advises its clients in Spain because the right to privacy is above any corporate norm and dismissal is difficult to accommodate, according to In 2015, the Supreme Court ruled, declaring a dismissal of an executive void for a romance with a subordinate.

To avoid that any member of the couple can be dismissed alleging conflict of interest, the communication of the sentimental relationship to the superiors plays a key role. When its existence is recognized and the company has the capacity to take measures, such as changing the subordinate's report line or transferring one of the members of the couple, the conflict of interest and the possibility of dismissal are driven away. This communication by the lovers is another of the recommendations that Spanish codes of conduct should include, in which romantic relationships rarely appear, appreciates Ignacio Esteban, associate of the labor department of Garrigues, who does admit that he receives US multinational consultations on whether they can directly implement in their Spanish subsidiaries the document that sets their standards of behavior.

The case of KPMG is more frequent here. “Our code of conduct does not refer to aspects of the personal sphere or relationships, but it governs as a general principle for all professionals of the firm to value and avoid incurring any type of conflict of interest in their different actions,” says Teresa Coelho , responsible partner of people in the consultancy.

In fact, few lawyers have directly brought a dispute of this nature. And that in this country more than a third of the population surveyed last year by Infojobs acknowledged having fallen in love at work. Yes it is known of the malaise generated among the employees of some big companies for what they consider favor treatment of the leaders towards their partners, whose promotion they call meteoric; or where the bosses married their secretaries. Conflicts of interest are mainly related to salary increases higher than the rest for the couple, allocation of better projects and faster promotions.

If these situations come to light, they can become a burden for the manager in the face of his candidacy in a new company. You will have to give many explanations in the selection process. According to Miguel Ángel Zuil, partner responsible for the executive selection firm Boyden, it is normal that if the relationship with a person from the contracting company is preexisting, try to avoid signing the manager. If it is a posteriori, the habitual thing is to separate the subordinate from the direct hierarchical line of his partner.

To overcome this type of conflict in organizations, David Díaz recommends that companies communicate to the entire staff the content of the ethical code and its updates, as well as provide training on it and be consistent in its application.

Working with family members is very frequent in Spain. In fact, the Workers' Statute itself recognizes this possibility by regulating different rights and permits of employees, says Ignacio Esteban, of Garrigues. The problems usually appear when those close to each other cross the hierarchical line, very common in family businesses, which try to address possible conflicts in their family protocols, adds Mario Barros, partner of Uría Menéndez.

It is precisely in the offices of Spanish lawyers where it is a matter of curbing the problems derived from these links by expressly preventing family members from working on them. The Garrigues partner code prohibits the children of these professionals from joining the firm, a widespread mandate in Anglo-Saxon law firms.