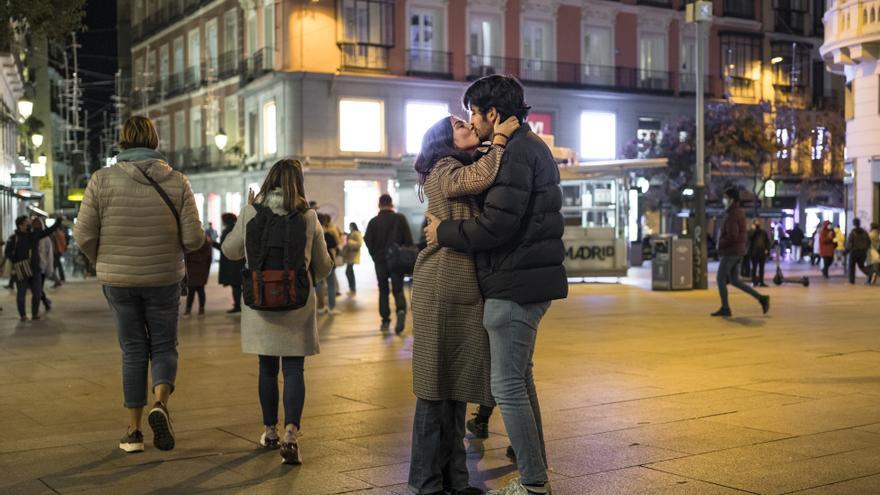 At the crossroads between Gran Vía, Hortaleza, Fuencarral and Montera, next to the new Metro elevator, Daniel Ochoa, camera in hand, goes out looking for kisses. At night, the center of post-pandemic Madrid is an appropriate setting. The photographer wanders and observes: “It’s a bit like fishing. It has something of a hunter. I wander around here, Malasaña, Callao, Sol … It depends on the time and day. I have always liked street photography ”.

He started photographing kisses several years ago, inspired by a book by his father – who is a poet – called Gesture of love in memory. However, the project fell asleep for more than five years. With the outbreak of the pandemic, Daniel returned to Pamplona, ​​his hometown, to be with his mother, now very old. There she lived her isolation, aware that, if she went out to work, she would not be able to see her again, at least “until we were vaccinated, if such a thing existed.”

“I realized that the isolation we have experienced, the distance, are very damaging issues. The fact of going out into the street in myself was something that surprised me, something as everyday as being around people again, touching each other… ”. For him, the kiss “is the symbol that exemplifies all that, and after the pandemic that we are still experiencing, it reflected very well the hope of being human again.” And that’s what he has been doing when the restrictions were lifted.

The work is part of a commission for National Geographic. The specialized publication will publish a book to illustrate the pandemic in a global way, in which the photographs of Daniel, who has been awarded a grant to make this collection, will appear: “Then I will continue. I did it before I was commissioned and I find it interesting to document the time in which I live ”.

He has captured kisses in Madrid, Barcelona, ​​San Sebastián, Pamplona … Always with his camera around his neck, he qualifies this work as an annex: “You go out to do other types of errands, and when you see a kiss, you take a picture.” He explains that with this series he wants to inspire optimism or hope, although it also depends on the public, since, according to his qualifications, the photos are taken by him, but also by whoever sees them: “We have gone through a tremendous storm, but just like when we were in the worst At the moment it was important to think about a horizon, it would be good to think that kisses and that, in essence, life, will return for the majority ”, he details.

He fondly recalls a scene in Barcelona, ​​on Paseo del Born, when a couple kissed in the middle of the cobbled street, cutting off traffic without realizing it. “They were very much in their world, they would not let a motorcycle pass, but the scene was so beautiful that those who were riding on it were half laughing,” he recalls. He has realized that, on many occasions, those whom he photographs are not aware, but they become the center of attention for the rest.

Other times, the situation is somewhat more complex, as it happened in Madrid with two women. When portraying them, two people came to warn them that “someone was recording them”, while a third rebuked him. After explaining his work and showing them the image, everything came to nothing: “They loved it, we exchanged messages on Instagram and I sent it to them.” Ochoa decides not to approach his models to ask permission at first, because “most of the time they are doing their thing, I am not going to bother them. In the end they are just photos, nothing more and nothing less ”.

However, he confesses that, lately, it is more difficult for him to go unnoticed: “For some time, I have always been caught. 99% of the time they react super well ”. You have to break the first barrier of suspicion, but when you show them the result, the reaction is always the same: “When you believe in what you are doing and explain it honestly, people welcome it. It is a scene that we do not normally see of ourselves. They are spontaneous photos and the environments are quite peculiar ”. However, he also accumulates some negative experiences: “Once a person came straight up to me, took out a badge and said ‘I’m a policeman, delete the photo’”. He agreed, despite not being obliged to do so.

The moment, the context, the light, the people, the gestures … All these variables influence making an image worthy of passing the cut to form part of your collection, although it underlines an indispensable point: “I like that there is something that touches you inside, that you empathize, that you feel something ”. He acknowledges that not all kisses are of love, like the famous Times Square between the sailor and the nurse, which nevertheless “frames a feeling of the end of the war.” “Photographing kisses is nothing original, but doing it after this situation we have just experienced may be a declaration of intent,” he says.

Despite his new virality on Twitter, Daniel Ochoa has been a renowned photographer for years, making covers all over the world. He has worked for the New York Times, National Geographic, Washington Post and won two Word Press Photo Awards. Freelance since 2017, he has portrayed rites and traditions in Spain and other countries: “Professional security and salary at the end of the month are very good, but I really like what I do, I want to continue doing it. I believed that there was life outside of where I was, and indeed, there is ”. Now he works on a series of posed portraits, which he defines as “something much more conceptual”. “I do portraits and they draw themselves, it is a reflection on how nowadays we all lie with photography,” he says.

On the border of Mexico, Tijuana has also been captured by his lens, showing the situation of migrants: “You had to be careful. If someone comes to you with a walkie-talkie in hand and says ‘get out of here’, then you are leaving, because you are lucky that they have warned you, there you are not playing a brick. “

Beyond the fame that his post-pandemic photos have achieved, Daniel hopes to go beyond the images, touching the personal of each one, since, after having lived through this situation, it is necessary to “return to normal with safety”, to his judgment: “It is important not only to be alive but to have a reason to live for. We have been locked up alive and now we have to have reasons to live outside ”.